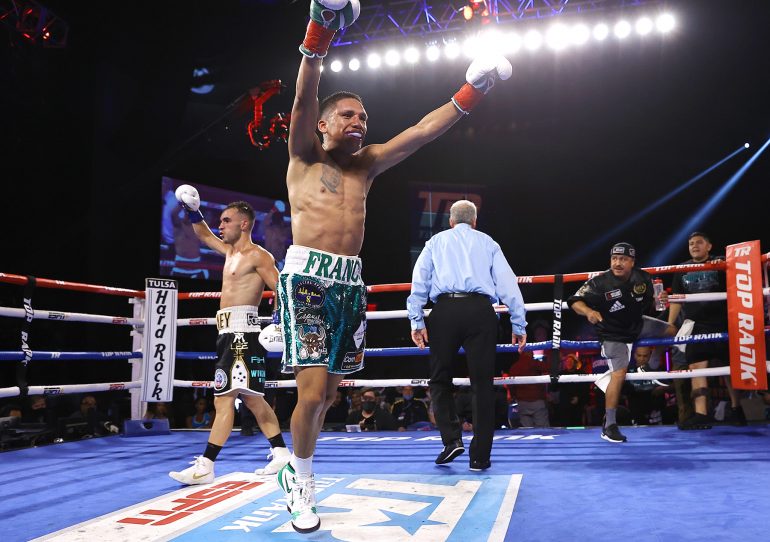 There were no head butts this time. There was no controversy this time. Joshua Franco made sure there was no doubt either, chewing up Andrew Moloney in a unanimous decision to retain his secondary WBA junior bantamweight title Saturday night at the Hard Rock Hotel & Casino, in Tulsa, Oklahoma. 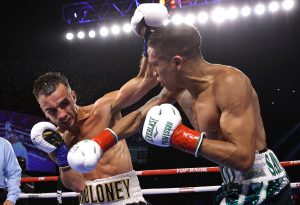 It was determined it wasn’t a knockdown.

Aside from that, it was Franco working behind a strong, steady jab and using combination punching to break down Moloney, ranked No. 8 at 115 by The Ring.

“I had to switch it up on him,” Franco said. “He thought I was going to put pressure on him the whole time. That wasn’t working, so I had to switch it up and go to my boxing skills. I had fun with my rhythm, with my jab, my feet. I’m comfortable in there, and that’s what I did.

“I see bigger fights. I see Chocolatito, ‘Gallo” Estrada, Ioka, Ancajas. Any of those fighters, I want to unify. For sure, (this win) puts me in the top five, on the same list as all the other champions. I believe I’m top five.

“We just told each other, all that talking is part of the game, part of building the fight up. He’ll be world champion again. He’s a strong fighter. Nothing but respect to him. I wish him the best in his career.”

“I’ll have to use this as motivation to come back stronger,” Moloney said. “It’s going to be a long road back.” 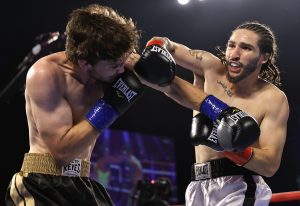 On the undercard, middleweight Nico Ali Walsh, the grandson of Muhammad Ali, won his pro debut with a first-round knockout over Jordan Weeks (4-2, 2 KOs).

“This lived up completely to my expectations. It’s been an emotional journey, this whole ride, these last couple of months,” Ali Walsh said. “Obviously, my grandfather, I’m thinking about him so much. I miss him. It’s just an emotional journey, and thank you to Jordan Weeks and his people. Tough, tough kid. I think me and him made a little bit of history tonight.

“To hear those Ali chants was something that I’ll never forget. I didn’t expect that, to be honest, but it was special.”

“Moran is a true Mexican warrior,” Barboza said. “I thought I’d get the knockout, but he ate a lot of punches. My goal is to get that world title shot, and I am going to keep going until I make that a reality. I want any of the big names at 140 pounds.”

Jason Moloney, Andrew Moloney’s twin, started the Moloney family’s night off well by winning a 10-round decision over Joshua Greer Jr. (22-3-2, 14 KOs). It was the first time Jason Moloney (22-2, 18 KOs) fought in almost a year, since losing to Naoya Inoue in October 2020.