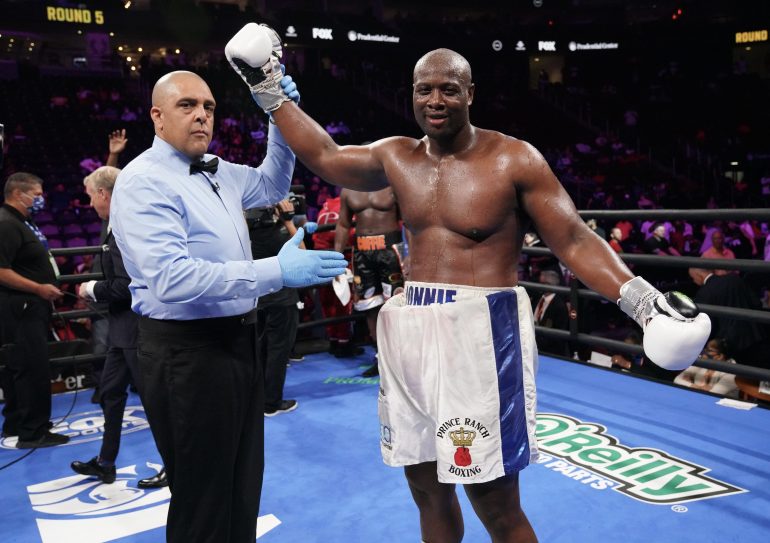 Amid the pulsating music, gold ceiling-to-floor dance poles and flickering lights, some people where Jonnie Rice works recognized him last Saturday. Otherwise, everyone else was too busy to notice his fine work on the gigantic TV screens that adorn the walls of the Las Vegas high-end gentleman’s club where Rice is employed.

The 6-foot-5, 268-pound, 34-year-old’s performance was as dizzying as the strippers who twirled down the polls, as he ruined Michael Coffie’s clean slate at 2:15 of the fifth round in the FOX PBC Fight Night main event from the Prudential Center in Newark, New Jersey.

On Wednesday night, looking polished in a pristine suit, Rice was back at work at the strip club greeting everyone who walked in with a gleaming smile.

He made $55,000 off the victory, he said, and he also made a point: There are more struggling, talented fighters out there like him looking for a chance than there are Tyson Furys and Canelo Alvarezes of the world.

Rice’s whirlwind schedule leads from overnights at the strip club, going 9 p.m. to 5 a.m. during the week, and 10 p.m. to 7 a.m. on the weekends. Somehow, Rice squeezes in training, and manages to get days off to fight in the two years he’s worked there. Rice felt he was 10 pounds overweight for the Coffie fight, since he intended to weight 258. He does his best to train each day from 2 p.m. to 5 p.m.

Rice, like many middle-class fighters, would like to make a fulltime commitment to his passion, yet he can’t to pay the bills. When he’s able to make that commitment, scrambling with everything else, his eyes are half-mast by the time he steps into the ring.

“My world didn’t change much after that win, because I still had to go to work,” Rice said, laughing. “I even had to take my usual two days off, Monday and Tuesday, to make up for the two days I had to take to fight. Don’t get me wrong, my boss and the place treat very well. They kept me on a retainer, with $5,000 if I didn’t fight, and $55,000 if I did, because no one knew whether Gerald Washington had COVID or not.

“When you’re young, you can take chances. I need to be more efficient with the time I train, knowing what works and what doesn’t work. I don’t even have a manager, or a promoter. I’m 34 and I need more security. I owe a lot to al Haymon and I know he takes care of his fighters. I would like to think the win will help me.”

Rice (14-6-1, 10 knockouts) was compared to a poor man’s Buster Douglas after his Coffie victory. The one major difference, Rice stressed, is being consistent. He’s kept his hand in boxing as a live sparring partner for Fury and Michael Hunter.

Rice has hopefully reinvented himself to being taken seriously when it comes fighting.

“I blame myself, because you can’t let your struggle outweigh your hustle,” Rice said. “It’s not my situation. Everyone has to rise about their battles and toils, and I can’t keep myself down anymore. Now, I have to stay consistent, and although I’m honored to be compared to the great Buster Douglas, the only thing I don’t like is, unfortunately, Buster Douglas had a one-and-done, and I can’t do that.

“I have to continue to repeat what I did Saturday, and that’s my obligation, because I felt I could be even better. And I’m the one to blame. Look at my fight against Dempsey McKean (March 2020 KO by 10). I was a little overweight (283¼). My mindset was bad. I was overeating, and maybe I was a little depressed. I still fought a great fight and with Efe Ajagba (September 2020), the pandemic was going on and I felt a little rusty.

“Top Rank offered me $60,000 and I took it. This Coffie victory set a price how much I need to be paid for my next fight. Efe beat me, but he didn’t beat me up. Some people thought Coffie was going to destroy me. 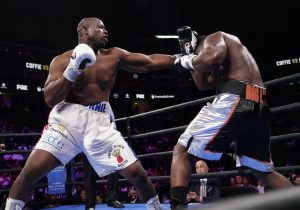 The few that thought Jonnie Rice would upset Michael Coffie by knockout really cashed in.

“I would beat Efe if we fought again. I can be honest. A lot of times I did struggle with confidence. Efe lived up to his hype, but I let it get into my head too much. Mentally, I beat myself against Efe. I didn’t take enough risk—Efe took the risk. He won and deserved to win. Efe is a gladiator, I’m sure Efe would give me another chance.”

Rice said fighting on a PBC Al Haymon card was also beneficial for him. His next move, Rice stresses, will be after talking to Haymon and PBC first.

“Al and PBC set a price. Mr. Haymon knows how to take care of his fighters. Why do you thing everyone who fights for him first thanks Mr. Haymon?” Rice said. “Haymon gives guys a chance—and he pays them. I was treated very well.”

When he arrived back to work Wednesday night, Rice’s security pals piled on to congratulate him. Though when Rice asked them if anyone put any money down on him, he was greeted by a few turned heads.

However, another fighter that did believe in Rice plunked $1,000 down on him, and Philadelphia heavyweight Joey Dawejko is $13,000 richer because of it—and bet that Rice would win by knockout.

Last Saturday, a few in the strip club noticed Rice. The janitors kept staring up at the screens thinking that one guy on national TV looks familiar—because he was: He was Jonnie Rice, the big guy in front.