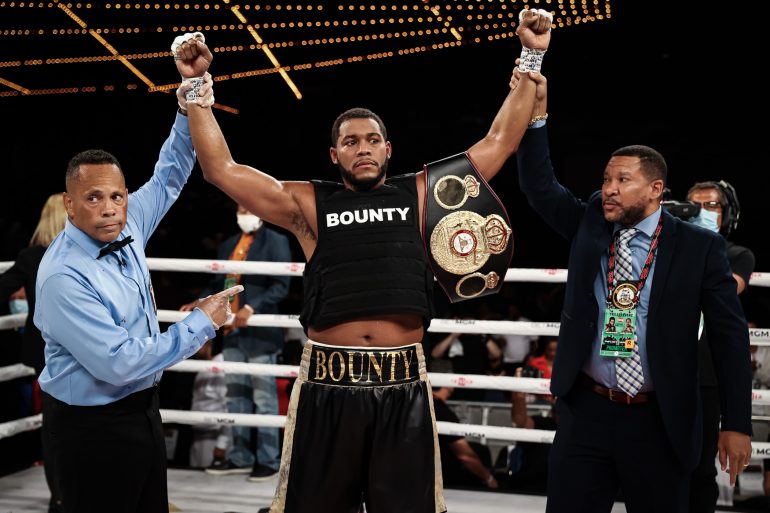 If the intention was supposed to create “a nightclub” environment for these series of Tuesday night shows Triller Fight Club is doing from Madison Square Garden’s Hulu Theater, the Triller folks may have succeeded.

Between the pulsating music throbbing throughout the tiny arena, and the fact that you had to raise your voice every time you spoke to the person next to you, it was sometimes hard to remember a fight was even taking place in the augural show.

But fights were taking place, with the centerpiece being Michael “The Bounty” Hunter’s fourth-round knockout at 2:49 of Mike Wilson in a scheduled 10-rounder.

Ring’s No. 7-ranked heavyweight, Hunter (20-1-1, 14 knockouts) smothered Wilson, who was fighting for the first time in 23 months. Wilson (21-2, 10 KOs) did have a great scowl and nothing more. Hunter remains undefeated as a heavyweight and is now 8-0-1 since his unanimous cruiserweight loss to Oleksandr Usyk in April 2017.

With 1:25 left in the second, Hunter held both hands up, daring Wilson to hit him. Hunter closed the second with a barrage of shots, and came very close to hitting Wilson after the bell. As he walked to his corner, referee Ricky Gonzalez warned Hunter about the late shots.

Hunter controlled the third, though it was apparent that Wilson would fight back. Midway through the third, he hit Hunter with a three-punch combination that did little to keep Hunter off of him.

With :57 left in the fourth, Hunter nailed Wilson with an overhand right, and then closed the show by connecting on another straight right, sending the game Wilson straight down.

Gonzalez saw quickly how badly Wilson was hurt, then waved it over giving Hunter a fourth-round knockout at 2:49.

To reach the main event, Triller rolled out a smorgasbord of goodies, featuring some competitive undercard bouts.

In a fight over the further relevance of each other, LesPierre was the stronger fighter early on. Algieri, the former WBO junior welterweight titlist, found himself being outmuscled inside and sometimes confused by the 36-year-old southpaw from Brooklyn, by way of Trinidad and Tobago.

As the middle rounds approached, Algieri seemed to pick up his pace, but what affected the 37-year-old in his prime creeped back up into the picture Tuesday night—no power. There were more than a few times when Algieri plunged a right off the chin of LesPierre with no affect.

Then again, LesPierre was also deficient in that area. And as the second half of the fight unfolded, LesPierre began folding. Algieri tagged him with a left uppercut in the sixth, which snapped LesPierre’s head back. Algieri went well to the body, and LesPierre seemed to wobble in the last minute of the sixth. As the final seconds of the sixth ticked away, LesPierre came on to stun Algieri with a straight right to the face. Algieri just smiled and shook his head as he headed to his corner.

The seventh followed the same template as the sixth, with Algieri shooting lefts to the body and countering LesPierre, who could only try covering up with his with his arms.

By the eighth, Algieri was firmly in control. He began coming on in the fifth and continued. In the first 40 seconds of the ninth, Algieri had LesPierre backed up in a corner and burying him with shot after shot. Referee Ron Lipton looked in, though allowed LesPierre to fight his way back. Neither had anything on their punches by the end of the ninth, although Algieri’s early barrage was enough for him to bank another round.

In the last round, sensing he had the fight won, Algieri stayed at a comfortable distance, sporadically entering the punching zone, then quickly getting out of LesPierre’s range.

One of the more spirited undercard fights was Ukrainian welterweight southpaw Ivan Golub’s 10-round unanimous decision over Eric Walker, highlighted by two Golub knockdowns of Walker in the fifth and ninth rounds.

The card was over by around 8:40 and a rap concert began.