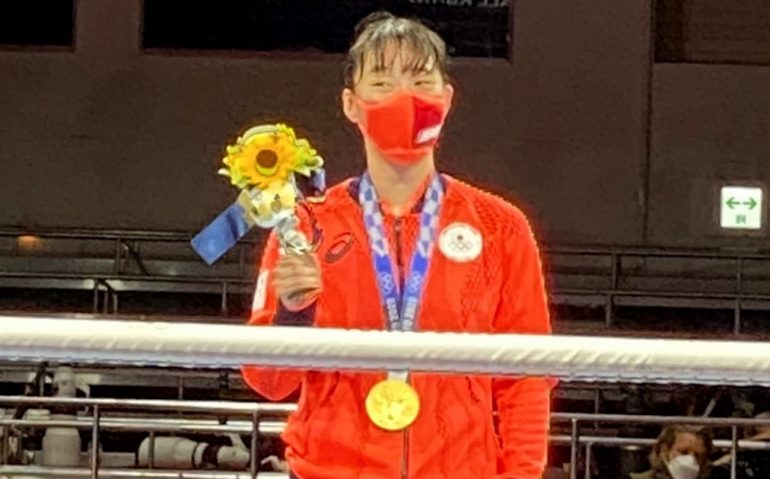 Sena Irie was denied glory on the world stage two years when Nesthy Petecio won a majority decision over her in the quarterfinals of the 2019 World Championships en route to a gold medal finish.

The Japanese fighter got a measure of revenge on Tuesday, winning a 5-0 unanimous decision over the Filipina Petecio to win the inaugural women’s featherweight Olympic gold medal at the Ryōgoku Kokugikan in Tokyo, Japan.

Petecio, 29, of Davao City, Philippines was the aggressor from the opening bell, switching from southpaw to orthodox to land punches on the taller Irie, 21, of Yonago, Japan. All five judges scored the first round in favor of Irie, favoring her long jab over Petecio’s power punching in close.

Petecio picked up the pace in round two, landing several power shots, including a sweeping left that rocked Irie momentarily. Sensing the momentum shifting away, Irie closed the second strong, using her jab to set up a combination before the bell. Four of the judges scored the round for Petecio, meaning Petecio would need a big third to pull it out on the scorecards.

The two fighters spent almost as much time tangled in clinches down the stretch, though Irie appeared the fresher of the two in the final minute, boxing with a sense of urgency to make a final statement.

Four judges scored the bout 29-28 for Irie, while the Argentinian judge had it a 30-27 shutout.

Irie joins Takao Sakurai (1964) and Ryota Murata (2012) as the third Japanese boxer to win gold at the Olympics.

The two have faced off a total of four times times now, with Irie winning a split decision at the 2019 ASBC Elite Boxing Championships and a majority decision at the 2020 Asia-Oceania Olympic qualification tournament.

Petecio, who missed qualification at the 2016 Games, still cried tears of joy on the podium while receiving her silver medal. She will receive at least P17 million, or over $341,000, in incentives for her silver medal finish, which includes a P5 million (about $100,000) guarantee from the government by Philippine law.

The Philippines still has two boxers in the semifinals as men’s middleweight Eumir Marcial and men’s flyweight Carlo Paalam are set to compete for a spot in the gold medal matches.

The silver medal is the Philippines’ third  in the boxing medal, following featherweight Anthony Villanueva in 1964 and light flyweight Mansueto “Onyok” Velasco in 1996. The Philippines has never won an Olympic gold in boxing, however.

Women’s featherweight and welterweight divisions debuted at the Tokyo Games after the previous two Olympics only featured flyweight, lightweight and middleweight classes for women.