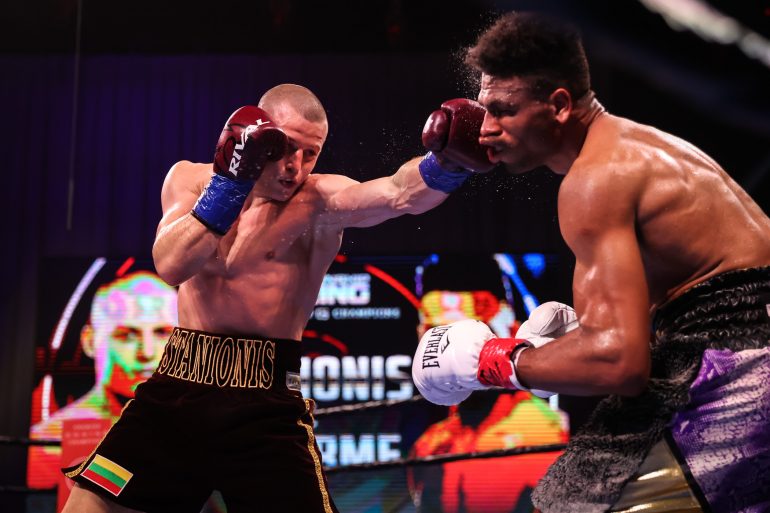 Rising welterweight prospect Eimantas Stanionis will face former titlist Luis Collazo in a 10-round affair that headlines FOX PBC Night on Saturday from The Armory in Minneapolis, Minnesota.

The 26-year-old Stanionis (13-0, 9 KOs) is coming off a 12-round decision over former title challenge Thomas Dulorme in April. Meanwhile, the battle-tested Collazo (39-8, 20 KOs), though past his best days, has seen some of the division’s top fighters face-to-face, including Andre Berto, Ricky Hatton, Amir Khan, and Shane Mosley.

He captured the WBA welterweight title in 2005 and defended it twice before losing it in a razor-thin decision to Hatton in 2006. Collazo is also keen to scoring upsets, with brutal knockout wins over Victor Ortiz and Sammy Vasquez.

The now-40-year-old Brooklyn native has not fought  since October 2019 when he dropped a 10-round technical decision to Kudratillo Abdukakhorov after an accidental headbutt rendered him unable to continue. However, Collazo was down considerably at the time of the decision.

Fighting out of Upper Marlboro, Maryland, Fox (22-2, 5 KOs) is coming off a close decision loss to Luke Santamaria, who will also appear on the card, in August 2020.

Maestre (3-0, 3 KOs), who holds amateur wins over Carlos Adames, Alexander Besputin, Brian Castano, and Brian Ceballo, was initially slated to face fellow unbeaten Cody Crowley in the main event. However, the Canadian tested positive for COVID-19, which forced Maestre, who will make his U.S. debut, to take the second slot.

Former-two division champion Devon Alexander will return to the ring for the first time in two years for a 10-round welterweight fight against Luke Santamaría.

Alexander (27-6-1, 14 KOs), of St. Louis, last fought in June 2019 when he suffered an upset defeat that saw Ivan Redkach score a sixth-round knockout. But the southpaw looks to be in solid shape as fight night approaches.

The 32-year-old Santamaría (11-2-1, 7 KOs) steps into the ring for his FOX debut following a slew of solid outings. He dropped rising welterweight prospect Paul Kroll last October en route to a controversial decision loss that snapped a 10-bout winning streak. In the previous fight, Santamaria scored an upset win over Fox, flooring him in the opening round of their contest.