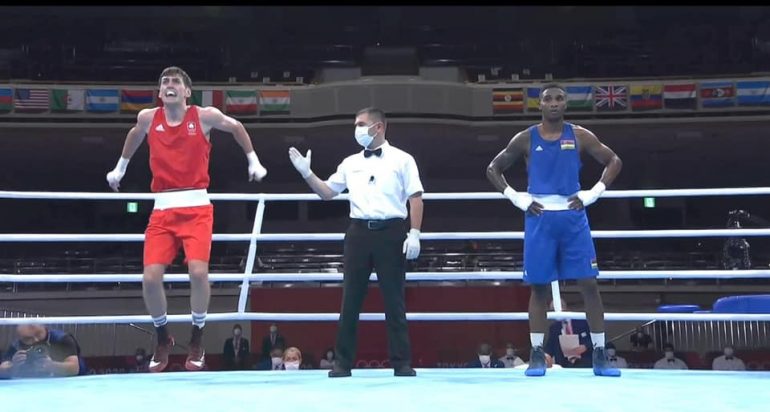 Irish welterweight Aidan Walsh was due to compete Sunday for shot at the gold medal match, but an overzealous celebration in his previous fight left him medically ineligible.

The 24-year-old from Belfast was unable to make it to the ring for his semifinal bout with Pat McCormack of Great Britain after injuring his ankle while doing a leaping celebration following a split decision win over Merven Clair of Mauritius in Friday’s quarterfinals.

McCormack, who advanced by walkover, will now face the winner between Cuba’s Roniel Iglesias and Russia’s Andrey Zamkovoy in the gold medal match, which is set for Tuesday, August 3.

Walsh left Ryōgoku Kokugikan stadium in a wheelchair on Friday with what Irish officials described as a “slight ankle injury.” Subsequent scans and medical reviews ruled out further competition by Sunday morning.

“He was hopeful. We were hopeful. He wanted to get into the ring but unfortunately his body just wouldn’t let him,” said Bernard Dunne, director of Ireland’s Olympic boxing squad, in an interview with RTE News.

Walsh will leave the Tokyo Olympics with a bronze medal, which he adds to his silver medal finish at the 2018 Commonwealth Games.

Ireland now has just one of its seven boxers remaining standing as women’s lightweight Kellie Harrington is set to face Imane Khelif of Algeria in the quarterfinals. Walsh’s sister, featherweight Michaela Walsh, had been defeated in the round of 16 by Irma Testa of Italy.