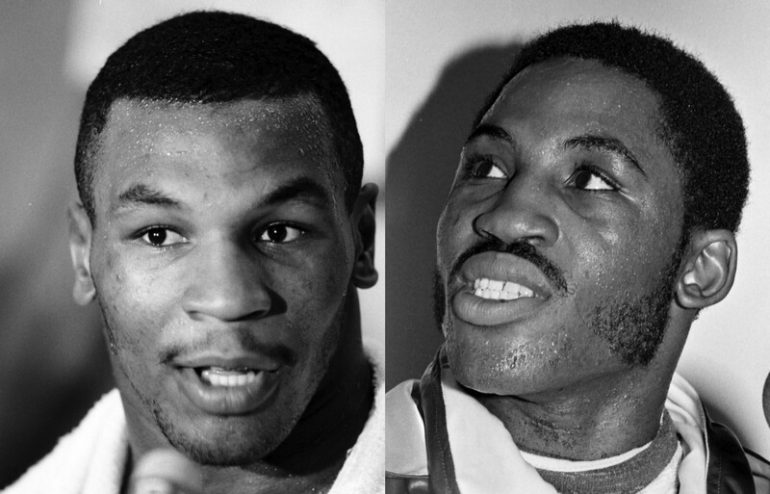 Photos from The Ring Archive
26
Jul
by Bernard Fernandez

Of all the fantasy fights that boxing fans could imagine, one of the more intriguing is the pairing of two short, stumpy heavyweights with such concussive knockout power that it would be highly unlikely that judges with pencils might be needed to determine the winner.

Lee Groves, a statistical analyst for CompuBox, analyzed prime-on-prime data from the careers of Joe Frazier and Mike Tyson and his determination, which appeared in the September 2018 issue of The Ring, was that it would one helluva slugfest which would conclude with Smokin’ Joe winning by 12th-round stoppage.  That projected outcome, of course, is open to spirited debate, but there is one of the principals who undoubtedly would have agreed with Groves’ conclusion.

Joe Frazier, who was 67 when he took his earthly 10-count on Nov. 7, 2011, weighed in on the theoretical matchup of himself and the young Tyson – well, sort of – prior to the nationally televised pairing of his son, Marvis, and Iron Mike on July 26, 1986, in Glen Falls, N.Y.

In addition to boldly (and quite incorrectly) predicting an easy, emphatic victory for Marvis, the left-hooking wrecking machine from Philadelphia sprinkled his not-so-veiled putdowns of  Tyson in the fight that was about to happen with allusions to how he felt he’d do against the 20–year-old virtual replica of himself if only he had access to a time machine.

“I’m not flattered at all by the people who say Tyson is like me when I was in my prime,” Smokin’ Joe said for an article that appeared in the Glen Falls Post-Star. “I’m a proven champion. People think he’s championship material, but he hasn’t proven anything yet. I fought everybody. He fights anybody. 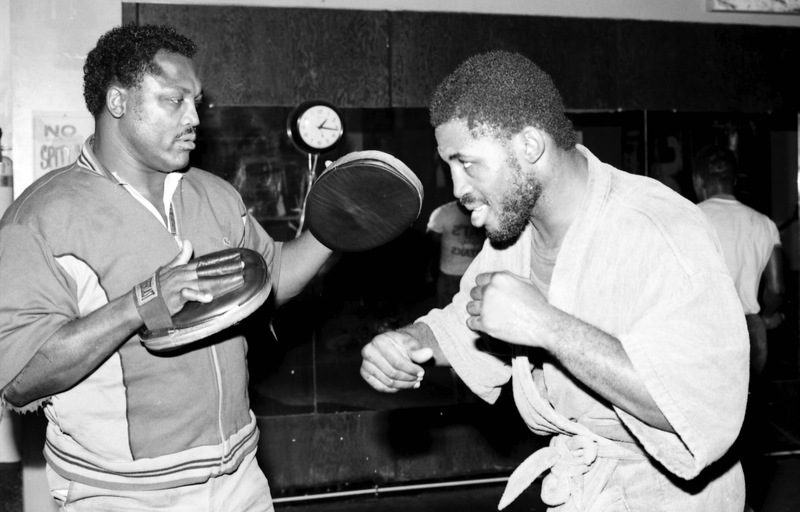 Father and son. Photo by The Ring/ Getty Images

The 35th anniversary of Joe Frazier’s familial dream fight that turned into an instant nightmare for his son is upon us and there isn’t much statistical data for Lee Groves or any other numbers-cruncher to munch on. Mere moments after the opening bell, Marvis, his back pressed against the corner ropes, was nearly decapitated by a crushing right uppercut. For all intents and purposes, the fight was over right then and there, but Tyson eliminated any traces of doubt that Joe’s kid might find an escape route out of deep trouble by following up with another right uppercut and a chopping left to the side of Marvis’ head. Marvis slid to the canvas, unconscious, and referee Joe Cortez immediately jumped in to signal an end to a fight that was more of a massacre. Since no count was initiated it officially went into the books as a TKO, but make no mistake, the stricken Marvis was not in any condition to rise within the allotted time frame.

With an elapsed time of 30 seconds, Tyson’s bludgeoning of Marvis Frazier remains the swiftest conclusion of any of his 24 one-round quickies in a career marked by similar blowouts. Well, Tyson also disposed on someone named Conroy Nelson in 30 seconds on Nov. 22, 1985, but that was only his 10th pro bout and, well, Nelson’s dad was not a legendary heavyweight champion who had knocked down Muhammad Ali and kayoed or stopped, among others, Jerry Quarry, Bob Foster, Jimmy Ellis, Eddie Machen, George Chuvalo and Buster Mathis.

Other Tyson blitzes that ended inside a minute came against Robert Colay (37 seconds), Clifford “The Black Rhino” Etienne and Lou Savarese (each 38) and Ricardo Spain and Michael Johnson (each 39).

Interviewed in the ring by ABC’s Alex Wallau after he’d starched Marvis, Tyson said the outcome wasn’t anything he hadn’t anticipated in just the manner in which it was accomplished. He called the uppercut his “favorite punch,” one that he figured would be open to him at some point through his prefight preparations with trainer Kevin Rooney.

Watching a replay of the putaway sequence, a beaming Tyson said, “Soon as he comes down, boom! Look at that. What can I say, what can I say? That’s all she wrote.”

Perhaps Tyson did not need any additional incentive to inflict punishment on Marvis Frazier or any opponent, but there is a lingering suspicion that his motivation in this particular instance was stoked by Marvis’ father, who might have talked his son into an especially brutal pounding. Even as Smokin’ Joe confidently predicted a favorable outcome for Marvis against Tyson, it was widely speculated that he was more imagining how he’d fare in such a matchup rather than his son. If that indeed was the case, he did Marvis no favors.

“Marvis is a truck,” Joe had said in the Post-Star story that ran a few days before the fight. “Mike Tyson is a good fighter and a fine gentleman, but he’s never fought anyone like Marvis. Marvis is like a truck and Tyson is like a wheelbarrow. A wheelbarrow that’s going to get run over.

“I’ve seen films of Tyson and he’s a good fighter. He’s been doing fine with the guys he fights, but he’s never seen a truck like Marvis. Now the world is gonna see what Tyson is really made of. The world is gonna see that Marvis is the man to beat. The way I look at it, Marvis will get the job done – whatever it takes. He’s gonna be looking for a clean win whether it’s a knockout or a decision.”

There is no disgrace, of course, in the fact that Marvis never attained the level of success that the man he lovingly called “Pop” did. But, although Marvis was for a time a world-ranked heavyweight, there are those who believe he might have achieved more had he fought as a cruiserweight, which might have been his more natural fighting poundage, and not been so tied to the same constantly advancing, pressure tactics that had worked so well for Joe.

Bert Cooper, the onetime protégé of Joe Frazier who was more physically and stylistically comparable to his mentor than Marvis, got his shot at the heavyweight championship after he and Joe separated, and he nearly pulled off a huge upset when he knocked down Evander Holyfield in the third round of their Nov. 23, 1991 title bout in Atlanta. Holyfield beat the count, however, and went on to stop “Smokin’” Bert in the seventh round.

“I put in a lot of phony weight just eating sloppy food, junk food,” Cooper, prior to his go at Holyfield, said in assessing Joe’s attempts to make him over into his own image. “Joe wanted me to be a heavyweight, just like he did with Marvis. Joe wants someone with a world title belt just like he did.” 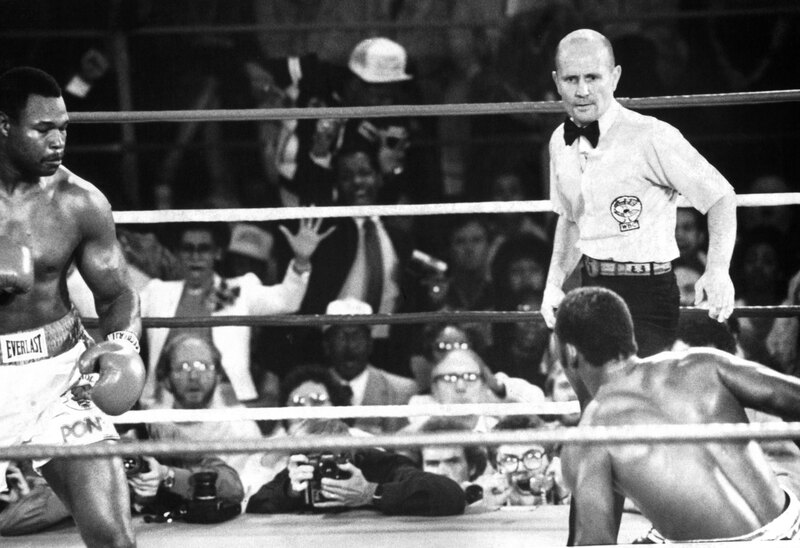 As a heavyweight, Marvis was good enough to have scored victories over James Broad, Joe Bugner, Bernard Benton, James “Quick” Tillis, Jose Ribalta and Bonecrusher Smith, but when he challenged the great Larry Holmes for the title on Nov. 25, 1983, in Las Vegas, he also didn’t make it to the end of the first round. That fight provided fuel for the naysayers who figured Marvis, fighting as an ersatz imitation of his father, had a style ill-suited for a confrontation with Tyson.

“Tyson will eat him alive, spit him out and step on him,” Beau Williford, who had trained Tillis and Lorenzo Boyd for losing bouts with Tyson, said of what he expected to happen. “And if the old man (Joe) keeps running his mouth, Mike will knock him out, too.”

In his prefight comments, Wallau more or less seconded what Williford had said. “In my opinion, it is not a matter of if Mike Tyson knocks out Marvis Frazier, it’s just a matter of when,” he told viewers of the ABC telecast. “I don’t think that Marvis is overmatched in this fight because of a lack of talent. Since being knocked out by Larry Holmes, he has reestablished himself as a heavyweight to be contended with, with wins reached earlier over the likes of Quick Tillis and Bonecrusher Smith. He can fight. The reason why I and a lot of other people don’t think he can win against Tyson is the fact that his style is made to order for Mike.

“Like his father, Marvis relies on pressure and stamina and intensity to beat an opponent. But that aggressiveness is just perfect for a bomber like Mike Tyson. Remember, as great as Joe Frazier was, when he faced a tremendous power man like George Foreman he got bounced around the ring like a rubber ball. His pressure style was suicidal against Foreman, and I think that’s the case here today with Marvis and Mike Tyson.”

There is another factor that, in retrospect, is worth considering. A good but not great fighter who, by consensus, was an even better man, Marvis might not have embraced the sport that had made his father a legend as much as did Smokin’ Joe. As much as physical ability, absolute dedication to a craft that demands everything is the ingredient that can elevate a fighter beyond most limitations.

A publicist for Smokin’ Joe Frazier Inc., the Frazier family corporation, before the fight distributed a news release prior to Marvis’ fight with Tyson that read in part: “Marvis Frazier does not know where the rumors began, but he wants to put an end to them right now. The rumors persist that Marvis is a fighter only to please his father, former world heavyweight champion Joe Frazier. Nothing could be more removed from the truth.”

But some rumors have substance, and truth can be blurred when viewed through certain prisms. The fact is that Marvis Frazier fought just three more times after his loss to Tyson, his final bout a razor-close 10-round unanimous decision Philipp Brown on Oct. 27, 1988, in Tucson, Ariz. I was there at ringside for Marvis’ farewell appearance as an active boxer, although there was no announcement to that effect then, or ever.  He simply stepped away and stayed away, his final record forever standing at 19-2 with eight wins inside the distance.

Seven months after he’d outpointed Brown, Marvis, still just 26, explained why he chose not to resume a career that could have and maybe should have had more productivity to yield. “Pop said when it started feeling like a job, do something else,” he told me. “It started feeling like a job. You got to know when to get out of the game. It didn’t feel like I was there. The spirit left me.”

Joe Frazier never did express disappointment that Marvis did not keep on keeping on. A loving and devoted father, if he had a flaw as a trainer it was his steadfast belief that he could transform all his proteges , and maybe especially his son, into a passable imitation of his own indomitable self.

“He’s a stubborn, opinionated guy, but a good guy,” veteran trainer Lou Duva said of Joe prior to the Tyson-Marvis scrap. “The question is, does he book his fighters’ matches from here (Duva tapped his heart) or here (tapping his head)? Who’s coming to fight, Joe Frazier or his fighter? He’d like them to fight as good as Joe Frazier could, but there’s only one Joe Frazier.”