The Neutral Corner: Ep. 274 Recap (Charlo and Castaño fight to a draw, Joyce vs Takam preview) 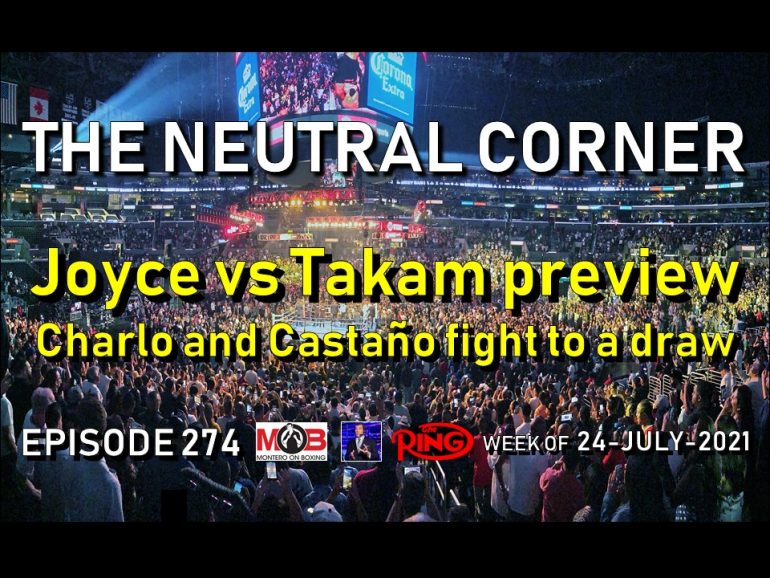 On episode 274 of The Neutral Corner boxing podcast, host Michael Montero received a bunch of calls from fans all over the world. They wanted to sound off on the controversial scoring of the Charlo vs Castaño junior middleweight unification bout. The overwhelming majority of callers felt the Argentinian fighter won.

On Saturday July 17, Jermell Charlo and Brian Castaño fought to a disputed draw in San Antonio, Texas. The PBC on Showtime headliner lived up to pre-fight expectations, with plenty of back and forth action. After 12 entertaining rounds, most fans and media felt Castaño had done enough to win, but the official judges were split.

Tim Cheatham had it a draw, while Steve Weisfeld scored it 114-113 for Castaño and Nelson Vazquez saw it 117-111 for Charlo. Vazquez, a veteran judge from Puerto Rico, drew immediate outrage from boxing fans for his ridiculous scorecard.

Although most felt Castaño edged it, Charlo did make a charge in the championship rounds to make things interesting. Neither man separated themselves. Hopefully, a rematch can be negotiated.

“I think that was a straight up robbery,” said Hamed. “I might be in the minority, but I haven’t felt like this about a fight since Kovalev-Ward 1 and Bradley-Pacquiao 1. I’m afraid Pacquiao vs Spence and Joshua vs Usyk could wind up like this as well.”

“I won’t use the word “robbery”, but I felt this fight was taken from Castaño,” said Nacho. “But as frustrated as I am, I’m not going to stop watching boxing. When this sport is at its best, there’s nothing like it.”

“I thought Castaño beat Charlo 115-113,” said Chris Bergin. “The worst scorecard I’ve seen in recent years was Canelo-Golovkin 1; Adalaide Byrd’s 118-110 score. The second worst was Ritson-Vasquez, Judge Terry O’Connor had it 117-111 for Ritson. And I would say Nelson Vasquez 117-111 Saturday night is third.”

“These robberies are not only doing a disservice to the guy that should have won the fight,” said Juan Valverde, “but also the guy who should have lost. If you think about it, if Charlo had lost this fight, he could come back, win the rematch and look even better. Like the first Canelo vs Golovkin fight. If Canelo would have lost, like he should have, and came back and put on the performance that he did in the rematch, how big would that have been for him?”