Devon Alexander to return on August 7 against Lucas Santamaria 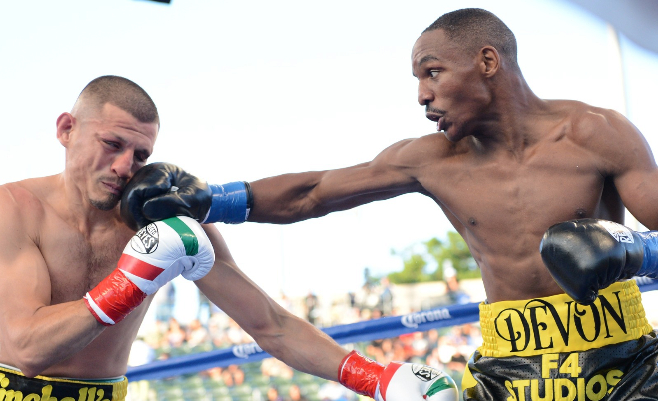 The former two-division titlist will break a 25-month hiatus when he takes on Lucas Santamaria on August 7 as part of a split FS1/FOX telecast from Minneapolis, Minnesota, The Ring learned Monday evening.

Alexander and Santamaria were initially slated to battle on July 31 at Prudential Center in Newark. However, The Ring has been informed that the fight had been pushed back.

Alexander burst on the scene in 2009 when he stopped Junior Witter in eight rounds to claim the vacant WBC junior welterweight title. He unified two belts in his very next fight against Juan Urango, stopping the Florida-based Colombian in eight rounds. He made one defense before suffering his first pro loss in January 2011 to Timothy Bradley.

In the fall of 2012, Alexander outpointed Randall Bailey over 12 rounds to win the IBF welterweight belt. And reminiscent of his reign as a unified titlist at 140 pounds, he only made one defense before “Showtime” Shawn Porter outboxed him in a December 2013 main event in Brooklyn to snag the title.

Alexander has fallen off the map in recent years, though. He is winless in his last four fights and was knocked out by Ivan Redkach in the sixth round of his most recent ring appearance, which took place in June 2019.

The 23-year-old Santamaria (11-2-1, 7 KOs) made his splash a year ago when he scored an upset victory over Mykal Fox in a Premier Boxing Champions event in Los Angeles, flooring his opponent in the opening frame. The Garden Grove, California native then returned to the ring two months later and came out on the wrong end of a unanimous decision to rising North Philly welterweight prospect Paul Kroll.