George Kambosos Jr. finds himself more motivated than ever for Teofimo Lopez

It came like a bolt from nowhere that Tuesday morning, June 15, four days away from the lightweight world championship fight between world champion Teofimo Lopez Jr. and George Kambosos Jr. in Miami.

That’s when Kambosos and his father, Jim, received a call. It was Peter Kahn, Kambosos’ manager, telling them they need to come to his hotel room.

Once George and Jim walked in, they could tell immediately something was wrong by the dour expression on Kahn’s face.

Kahn, Kambosos’ manager, told George and his father to sit down.

“What do you mean sit down?” Jim asked.

In a somber tone, Kahn urged the Australian duo again to sit.

The emotional outburst that followed featured a torrent of cursing and facial distortions.

“I was so angry, I was ready to get on a private jet and fly straight to Las Vegas and find (Lopez), COVID or not, that’s how I was at that point,” Kambosos said. “I was ready to fight. But it is what it is. What do you do? It happened. I don’t wish any bad health on the guy. I hope he gets better, and his wife, who I understand had it, too.

“I hope he makes a full recovery and I want him at 110-percent, because when I beat him, I don’t want any excuses.” 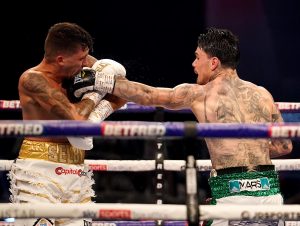 The Triller Fight Club pay-per-view was originally rescheduled to August 14 at LoanDepot Park, in Miami, where Lopez (16-0, 12 knockouts) would defend the Ring/IBF/WBO/WBA/WBC “franchise” belts. Kambosos (19-0, 10 KOs) decisioned Lee Selby, in London, back in October to merit the IBF mandatory shot against the 23-year-old Lopez.

As per numerous sources, the fight looks like it will be pushed back even further, to September 11 as part of Oscar De La Hoya’s ring return on Triller, allowing Lopez more time to recover.

“I want to fight this guy as soon as possible, but I’m willing to wait, and I know there is talk out there about a rematch between Lopez and (Vasiliy) Lomachenko,” Kambosos said. “I can’t wait to see it. I want to see it. They’ll fight without the belts, because they’ll all be mine. So, go ahead, they can take the rematch and I had plans of my own to fight Lomachenko, because he wants that rematch so badly, let him have it without any belts.

“Go ahead and make that fight. I’ll fight Devin Haney with all of the belts on the line then. I just know that Lopez was too sick to even get out of bed, and he never left Vegas four days prior to the (scheduled June) fight. Teofimo Lopez Sr. went on record saying his son was staying safe and he wasn’t sick, even though every time anyone passed the bar, the father was in there.

“Me and my whole team made sure everything stayed safe. I wanted to prove that myself and everyone on my team came out negative. I feel bad for everyone who showed up. There was only one fighter who rucked up and was ready to fight.” 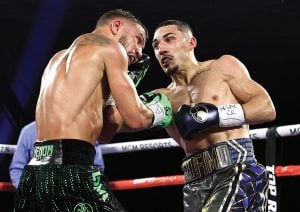 Vasiliy Lomachenko would like a rematch with Teofimo Lopez Jr., and it has Kambosos’ blessing–without the belts. (Photo by Mikey Williams/Top Rank via Getty Images)

In the meantime, Kambosos remains in Florida and continues to train. He does so armed with a valuable motivational push from a legend—Hall of Famer Bernard Hopkins.

“B-Hop” told Kambosos, 28, the whole situation will only make him stronger in the long run. Kambosos and Hopkins spoke for 20 minutes, and Hopkins stressed to Kambosos that he is going to have time to reach a “next level,” and be even better for the Lopez fight, while Lopez may not have the time to improve.

Fighters are fighters, and they adapt, Hopkins advised, and they keep moving forward.

“I heard everything, that Lopez couldn’t make weight, the fight wasn’t selling and all kinds of conspiracy theories,” said Kambosos, The Ring’s No. 8-ranked lightweight. “I know Lopez has asthma. We know he has COVID-19. When Triller first bid the event, the fight was supposed to be behind closed doors, so that doesn’t matter.

“If they wanted to do numbers, they should have had the fight in Australia. Like Bernard Hopkins said, I have the time to get better and that I keep moving forward.

“This whole thing is a very fluid situation. If the fight has to be pushed back to September, I’m okay with that, as long as Lopez is completely healthy. A September fight would mean that I would miss the birth of my third child.

“People have been telling me to relax; that fight is going to happen. Put yourself in my shoes. No one realizes what we as fighters go through. I went months without seeing my kids. I flew my pregnant wife over, with my father and my Australian coach over.

Lopez is 23 and it shows how much of a kid is. He was completely irresponsible. Karma is a bitch and it will come up and bite Lopez in the ass when I finally get my hands on him.

“As pissed as I am, it was the fans, the undercard fighters who traveled there, everyone involved with the fight and the Triller team had everything prepared and put their lives on hold for this fight. One person ruined this. Okay, he got, there’s no dispute he got it.

“Now, I want to kick his ass. I trained that Tuesday night we heard that Lopez had COVID. I’m moving forward, and while he’s recovering in his bed, and he can’t shadow box for more than 45 seconds, I’m shadow boxing for three hours.

“So, go ahead, Lomachenko and Lopez can have their rematch. I give them my blessing. They’ll just do it without all of the belts. At the end of the day, in all seriousness, I hope Lopez does recover and I want him to get better. It still doesn’t mean I won’t kick his ass. He’s making me wait and it’s making me more of a hungry lion.

“Yeah, you can call me the party crasher, because I’m going to ruin the plans of the lightweight division.”