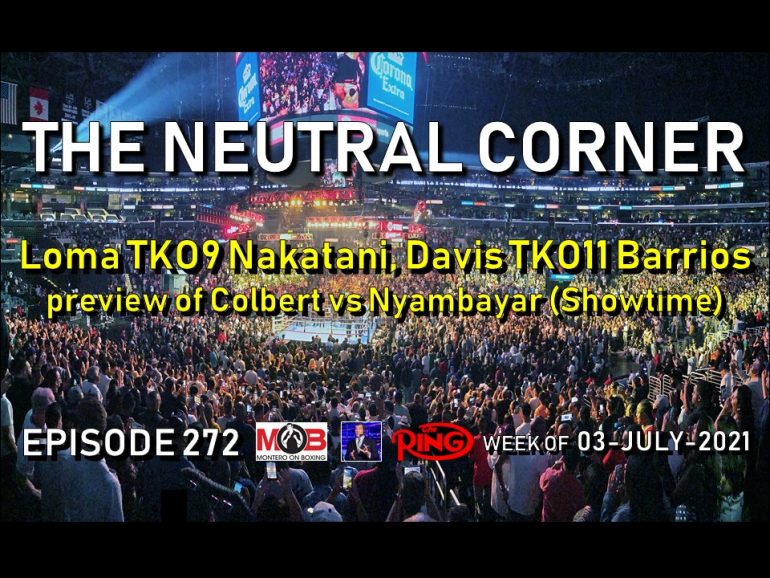 On episode 272 of The Neutral Corner boxing podcast, host Michael Montero gave his thoughts on the upcoming fight between Nonito Donaire and John Riel Casimero. The bantamweight title unification bout was almost scrapped due to disagreements over drug testing. In the end, the situation was settled and the fight will go forward as planned on August 14.

Montero broke down the differences between standard commission PEDS testing, the WBC “clean boxing program”, and the full VADA testing program, which is the gold standard in anti-doping. Many fans, media, and even fighters and their teams, mistake one testing program for another.

In other news, Paradigm Sports Management filed a lawsuit against Manny Pacquiao, citing breach of contract. Paradigm is hoping to stop the Filipino legend’s upcoming scheduled bout with Errol Spence Jr. Pacquiao’s team says they were well within their rights to sign to the Spence bout and they do not owe Paradigm anything. More to come on this developing situation.

There were three major cards of note on Saturday, June 26. In Mexico, Julio Cesar Martinez successfully defended his flyweight title. Martinez scored a TKO6 win over Joel Cordova in the headliner of a Matchroom card on DAZN.

In Las Vegas, Vasiliy Lomachenko dominated Masayoshi Nakatani in the headliner of a Top Rank show broadcast on the ESPN+ app. The Ukrainian dropped Nakatani in the fifth round before stopping him in the ninth. In the co-main, Zhanibek Alimkhanuly stopped Rob Brant in eight rounds.

During this week’s episode, Montero went on a heated rant about Davis’ lackluster resume, spin and blackballing from his promotional team, the WBA “regular” title belts, and the disappointing lack of pushback from many in the boxing media.

“I never felt that the Donaire vs Casimero fight was truly in danger of being cancelled,” said Nacho. “I just thought it was all bullshitting and posturing from Casimero’s team. I’m glad they got that whole thing resolved and we’re getting a clean fight.”

“This WBA nonsense is making the overall product of boxing bad,” said CJ Duncan. “Yesterday (Sunday) I was driving home and a friend sent me a message asking if I was watching the title fight on Fox. He said, “This kid must be good because he’s only 4-0 and he’s fighting for a title”. When I got home, before even clicking on the TV to watch, I immediately knew it was the WBA and it had to be the regular title.”

“Your rant on the Gervonta Davis WBA regular title situation was right on point,” said Thad. “I’m glad you said something. A lot of people on social media are calling Tank Davis the 140-pound champion, and if somebody brings up Josh Taylor, they say he hasn’t fought anybody. It’s a lot of propaganda and it’s nauseating.”

“Everything you said about Tank Davis and how they’re trying to make him big without taking risks, I 100% agree,” said Ace. “It’s a shame because it’s a disrespect to the real champions. These secondary titles are taking away from their shine and their hard work.”

“I don’t like the fact the Gennadiy Golovkin is likely not fighting until December,” said Hamed. “If he doesn’t fight Andrade or Charlo, I don’t think that’s going to be a good look.”