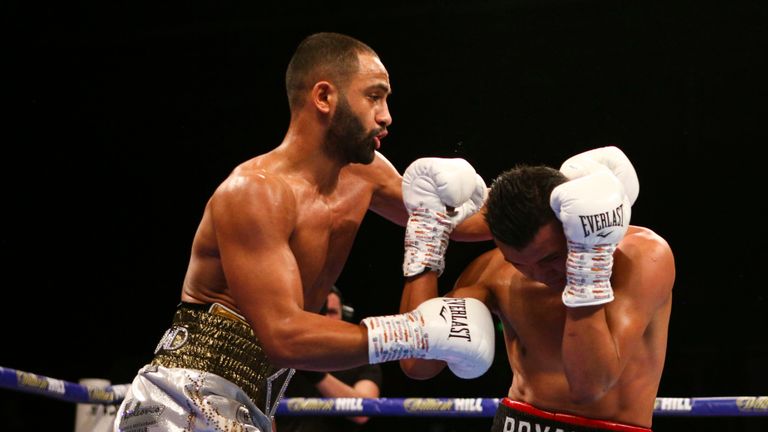 The Sheffield contender was being asked whether he felt former foe Jazza Dickens is a different man to the one he met and defeated when they first fought in 2013.

“If I say he hasn’t improved it’s a bit ignorant. He’s come on leaps and bounds. His overall game – since he’s been with the old man [George] Vaughan and Derry Mathews – he has come on massively and it’s shown in his recent performances. He’s had a few good wins and I think he’s come up a level but I feel I’m two or three levels above him and on August 7th you’ll see the difference.”

Did he learn anything from sparring the man he meets at Fight Camp?

“You don’t know, do you? A fight and a spar are two completely different things, when you get in a fight, it’s different,” Galahad explained. “He’s going to step his levels up and I’m going to step my levels up because a spar’s a spar. Even then, he’s still a good spar and that’s why I always use him for southpaw sparring.”

And while they’ve traded barbs, there is a mutual appreciation for what they have done and gone through in their professional careers.

They’re boxing somewhere plenty of fighters want to compete, at Matchroom’s HQ during the middle week of three consecutive fight weeks and Galahad is looking forward to it.

“It’s good isn’t it?” he said of the venue. “It’s something different, it’s exciting, there’ll be a good atmosphere but listen, when you get in that ring it doesn’t matter where that ring is. It could be in the desert but it doesn’t matter because I’ve got tunnel vision and I’m focused on what I’ve got to do.”

Galahad, who lost a grudge fight to Josh Warrington by the tightest of margins a couple of years ago, contends he’s boxed at a higher level than Dickens and said he’s “taken bigger risks”.

Yet fans have been known to turn on Galahad for not taking enough risks in the ring. His safety-first strategy is not for everyone but he won’t change it for anyone and he doesn’t mind being criticized.

“No, not really,” Galahad continued. “Because that’s my style. I don’t ever think ‘Oh my God, I need to impress this guy or that guy.’ I’m here to win because at the end of the day all people want are winners.”

Sometimes, however, he has sparkled when he’s been more aggressive.

“One hundred per cent, but there’s a time and place to be aggressive so when I get in there I just find out what I’ve got to do,” explained Galahad. “This fight, I’m going to win by any means necessary but I’m not going to leave it in the judges’ hands. I believe I’ve got to go in there and absolutely rip it away from him because I don’t want the same thing to happen to me as it did against Warrington.”

Warrington is hoping to fight Mauricio Lara in a September rematch but Galahad is making no bold claims about his future goals or targets. He’s fixed his gaze on August 7.

“Just get passed Dickens,” he said. “I’m not thinking of anything beyond that, I’m expecting a very hard night, I’ve got to do a number on him and that’s it.”