Errol Spence Jr. plans to move to 154 if Terence Crawford fight isn’t made 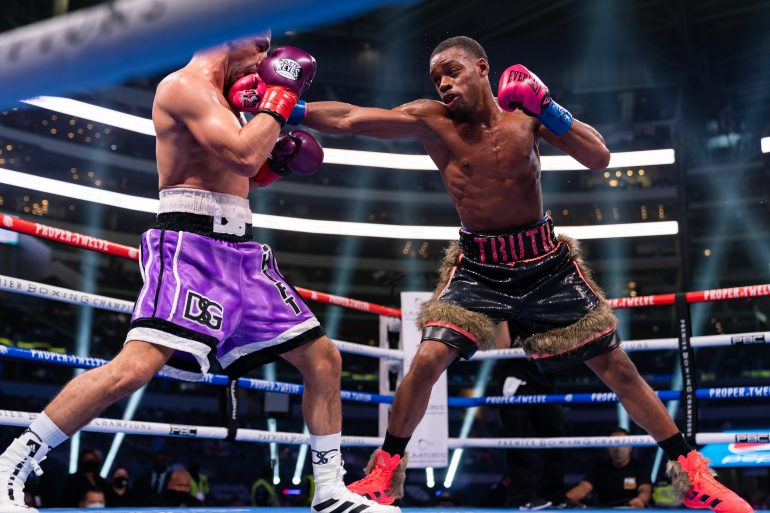 Errol Spence Jr. is planning to move to 154 pounds after his next fight unless fellow 147-pound titlist Terence Crawford changes his tune.

The unified welterweight titlist Spence (27-0, 21 knockouts) will next face Manny Pacquiao on an August 21 FOX Sports pay-per-view. It is expected that the Filipino will soon be elevated from WBA “champion in recess” to “super” champion. [Editor’s note: The “super” champion designation is the main WBA beltholder whom The Ring officially recognizes.]

Should he beat Pacquiao, Spence, 31, is willing to immediately face Crawford but if the latter balks on fighting him again, “The Truth” will move on.

“Once I get that belt, like I told [Premier Boxing Champions head] Al [Haymon], I want that fight with Crawford but if it doesn’t happen, then I’ll probably just move up [to 154 pounds] or something,” Spence told Barbershop Conversations. “I’m not going to waste my time trying to fight somebody who says they don’t have any interest in me anymore. He doesn’t want to fight me anymore.

“I most likely have two more fights at 147. I’m going to go across the street to [talk to Top Rank and] see what they’re talking about. If they are not talking about nothing, I’m moving up to 154. After the ‘Pacman’ fight hopefully we can make something happen [with Crawford].”

The 33-year-old Crawford (37-0, 28 KOs), who has won titles and The Ring championship at lightweight and The Ring/undisputed junior welterweight championship, has publicly dismissed the idea of fighting Spence multiple times, most recently after the Vergil Ortiz-Maurice Hooker fight in Texas.

“I ain’t fighting him,” he told The Ring. “The fight is never gonna happen. It’s over with.”

Spence implied that Crawford will never get any big fights if he remains with Top Rank.

“[Top Rank founder] Bob [Arum] treats him like any owner does an athlete,” said Spence. “Basically treat him like it’s property or something like that. I feel like he doesn’t really respect Terence. Basically any kind of money that he can get out of him, he’s going to get out of him. Bob is probably frustrated with him. If Bob says something crazy [Crawford is] going to say something crazy back.”