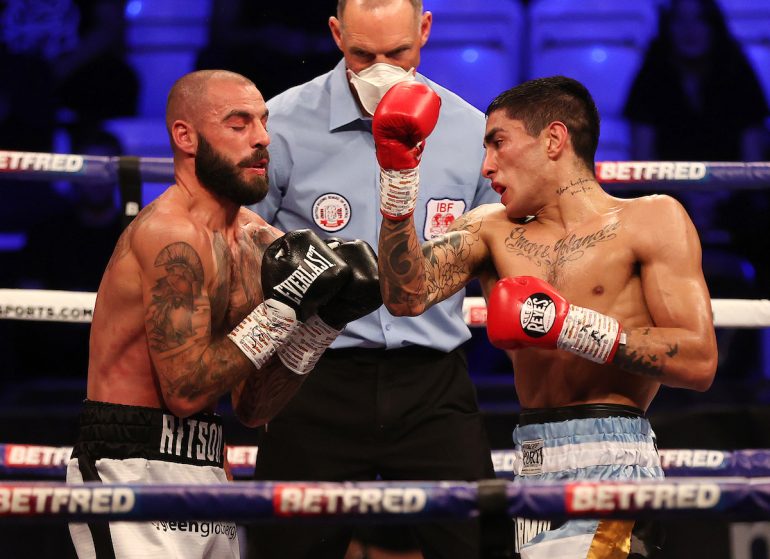 That Saturday DAZN card rocked. I enjoyed seeing some new talent, Cyrus Pattinson and Sol Dacres both look to be worth following and seeing Alen Babic do his thing is always fun (for as long as that is going to last). But that Jeremias Ponce take down of Lewis Ritson is what got me writing in. What a war. I knew nothing about Ponce going into this but am 100% a fan from now forward. What a beast!  In round 1 the announcers were doubting if he could maintain the torrid pace. In round ten he still was, and with quality.

I’d love to see him in with any of the top guys though if he gets his IBF shot against Josh Taylor I think the streak ends there. What do you think about his place in the unbelievably stacked 140-lb. division? Can you tell us any more about him? Hope this finds you well. Cheers. – Alec

Thanks for sharing your thoughts on DAZN’s boxing offering from England on Saturday and the eye-opening performance from Ponce. If you want to know more about the rugged Argentine, please read Diego Morilla’s pre-fight feature on his countryman:

I think Ponce is a welcome addition to the loaded junior welterweight division, but I don’t think he’s at all ready for the undisputed Ring champ, Josh Taylor, and as far as his place among the top 140-pounders, I think he’s just outside of the top 10. As impressive as he was against Ritson, I doubt the Ring Ratings Panel will suggest that he displace any of the lower-top-10 rated junior welterweights (Nos. 8-10 are Subriel Matias, Shohjahon Ergashev, and Robert Easter Jr.). Based on the discourse I’ve seen from the panel so far, they’re more inclined to enter Jose Pedraza, who stopped unbeaten (21-0) Julian Rodriguez in eight rounds, on Saturday on the Stevenson-Nakathila undercard.

(T)hat Jeremias Ponce take down of Lewis Ritson is what got me writing in. What a war. I thought it was a darn good scrap, but I wouldn’t call it a “war” – the action wasn’t two-sided enough in my opinion – from where I was sitting Ponce was in command during most of the fight, although Ritson did hang tough for as long as he could and certainly had his moments.

I knew nothing about Ponce going into this but am 100% a fan from now forward. What a beast! The 24-year-old “winger” (an old-school label for fighter’s who loop most of their long-range power punches) will make for action fights, especially when he’s matched with fellow aggressors. A savvy and battle-tested stick-and-mover like Taylor (or Viktor Postol or Easter) will likely outclass Ponce, who is stiff in his upper-body, flat-footed, and likes to work behind a high “earmuff” guard. However, he’s game as fighter’s get, and I like his concentrated body attack and mean uppercuts that he rips when he’s in close. I don’t see many junior welterweights having an easy time with him. I’d love to see him swap punches with Matias or Ivan Baranchyk.

In round 1 the announcers were doubting if he could maintain the torrid pace. In round ten he still was, and with quality. Ponce had the same mojo that Ritson did at lightweight, especially during the Newcastle native’s British title run from 2017-2018. I think the two-fisted volume-punching pressure-fighting version of Ritson that stopped Robbie Barrett, Joe Murray, Scott Cardle and Paul Murray in succession would have fared better vs. Ponce than the dude trying jab and pick his shots out of a Philly Shell defensive posture.

CHAVEZ VS. GATTI, HEARNS VS. MUGABI

A junior middleweight bout between a prime Thomas Hearns and rising contender John Mugabi in 1985.

A welterweight bout between the always vulnerable Arturo Gatti and a nearly washed JC Chavez in 2000.

In my opinion, both bouts could go either way, and I imagine both fights would be thrillers for as long as they lasted.

And I see Gatti-Chavez resembling Duran-Barkley and Morales-Maidana, bouts in which the old warriors had the perfect opponents to show enough flashes of their former glory to make it close on the cards. Chavez W SD 12.

I look forward to your takes.

I think peak Hitman blasts Mugabi out in one or two rounds. The Beast, who squared up right in front of his opponents and loaded up with every shot, was tailor-made for The Motor City Cobra’s piston-jab and straight-right bomb. All Hearns would need to do is keep his composure and box from a distance. As long as he didn’t get overzealous in search of the KO and rush it, there’s no way Mugabi could last with him or reach his chin. 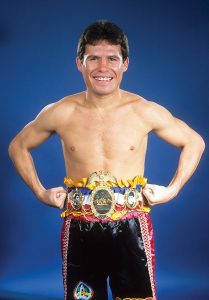 Chavez circa 1990, on his way to winning more than 80 consecutive fights. Photo by THE RING

I can also see the 2000 version of Chavez prevailing over the 2000 version of Gatti like Duran over The Blade or losing a close decision the way El Terrible did vs. Chino. At first, I was thinking Gatti would absolutely destroy Chavez, who I considered finished after his second loss to Oscar De La Hoya in 1998. The sluggish version that dropped a 10-rounder to Wily Wise in 1999 would have been beaten down to late stoppage by Gatti’s heavy haymakers. But then I remembered that Chavez regained a semblance of his old form when he challenged Kostya Tszyu for the WBC 140-pound belt in 2000. He was painfully slow and had to resort to blatant low blows vs. King Kostya, but his vintage stance and technique was almost there… enough at least for him to have a few moments vs. a future hall of famer in his prime. Tszyu patiently picked Chavez apart until his corner rescued him in Round 6, but the Russian-Aussie was so much sharper than Gatti ever was, especially in 2000. I know Gatti would be motivated like never before to face a legend like Chavez, but he couldn’t help but loop and telegraph his big shots to the body and head. I think Chavez would do a much better job of blocking (and countering) Gatti’s bombs (which could do as much damage as Tszyu’s sharp shots) than he did evading Kostya’s well-timed and quick one-twos down the pike.

I’d forgotten how much those back-to-back losses to Ivan Robinson in 1998 had messed with Gatti’s mojo. He really didn’t regain it until he was paired with Buddy McGirt following the Oscar De La Hoya drubbing in 2001, and even then, it took a few fights (including the loss to Micky Ward that kicked off their classic trilogy). So, I go back and forth with this one, but I guess I’ll go with the all-time great like you did. There wasn’t much of the real JC Superstar left in 2000, but whatever he could summon (and I figure Gatti’s reputation would get him to train hard) would probably be enough to get by the version of Thunder that was troubled a little bit (and bled A LOT) vs. the pesky Baby Joe Hutchinson.

Just got a brief question: Who is the hardest p4p puncher – Gennady Golovkin at his peak, Naoya Inoue or Artur Beterbiev?

And a bit longer MMs:

Thanks for all your useful & entertaining work. – Jose

Thanks for the kind words, Jose.

Deontay Wilder vs. David Tua, Chris Byrd – Tua by early KO; Byrd frustrates and outclasses Wilder for much of the bout but at some point The Bronze Bomber clips his wings with a big, wild right hand. 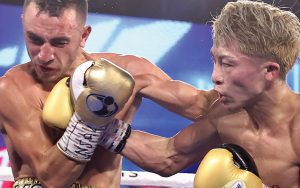 The Monster connects vs. Jason Moloney

Who is the hardest p4p puncher – Gennady Golovkin at his peak, Naoya Inoue or Artur Beterbiev? Inoue by a significant margin in my opinion. GGG and Beterbiev are physically stronger (at their weight classes than Inoue is at 118) and more durable, but the Japanese star is a more talented overall athlete with quicker hands and feet, better timing/reflexes and sharper punching technique, which adds to more P4P “pop” to his power shots.

THUNDER AND THE IBHOF

I’ve heard a lot of people say Arturo Gatti doesn’t belong in the HOF. I think he does, given his resume (not ATG-status, but it’s called The Hall of Fame, not the Hall of All-Time Greats) and his willingness to go where 99% of us wouldn’t dare to venture. Now detractors will say “There are better guys than Gatti NOT in”, but that doesn’t mean Arturo Gatti shouldn’t be in.

Do you think Gatti belongs in the HOF? What’s your line of thought if you don’t think so? Also, who are some of those guys with better careers than Thunder that you believe DO belong in the HOF? – Gregory K.

If you’re just going on strength of resume (especially if you mainly credit victories) there are too many to mention, Greg, but you make a good points about Gatti’s worthiness, and I’ve never heard anyone break it down as you did with this simple line: “…but it’s called The Hall of Fame, not the Hall of All-Time Greats.” That’s such a good point. Being an attraction, a crowd-pleaser, someone who made hardcore fans out of casuals is a factor in the voting even though purists are against it.

Gatti didn’t get my vote when his name first appeared on the IBHOF ballot because I believed there were more deserving candidates that year, but he was so beloved that he made it in (posthumously) on his first year of eligibility.

Once he was in, I didn’t bitch about it too much (as some of my peers did). Gatti’s got a solid resume. Yes, he was outclassed by De La Hoya and Floyd Mayweather Jr., but there shouldn’t be any shame in losing to those two. He’s got solid victories, including James Leija, Leo Dorin, Tracy Patterson, Gabe Ruelas and Gianluca Branco. 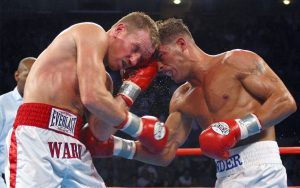 The final chapter between Gatti and Ward.

However, I think his slugfests – win or lose – are what put him over the top. There are too many to mention, but his modern-classic trilogy with Micky Ward can’t be ignored or downplayed IMO. And four of his ring battles were deemed the Fight of the Year by Ring Magazine: vs. Ruelas (1997), Ivan Robinson (1998), and Ward (2002 and 2003). Being in four Ring fights of the year ties him with Joe Frazier and George Foreman (that’s all-time great company right there). Only Carmen Basilio (who was in five consecutive fights of the year) and Muhammad Ali who was in SIX fights of the year, according to The Ring, are ahead of Gatti in that department.