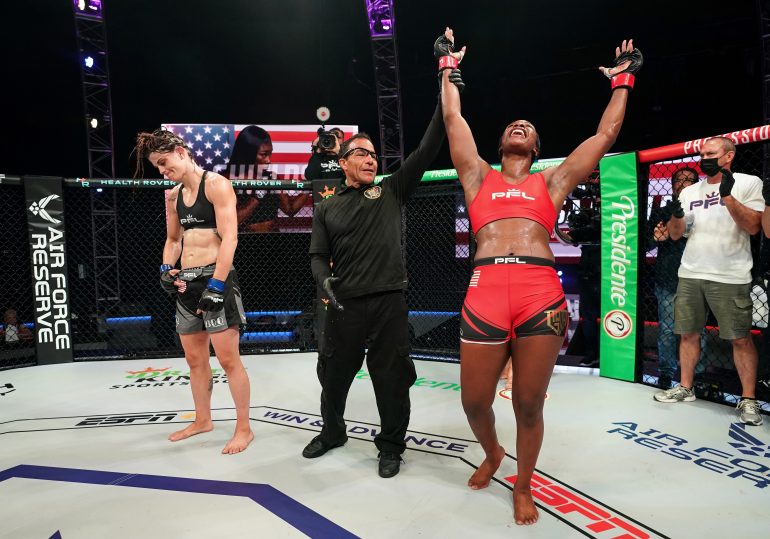 ATLANTIC CITY, NJ—Claressa Shields was a curiosity again. The two-time Olympic gold medalist stepped through a time capsule and walked back to a flashier, light-show version of Flint, Michigan, Thursday night, toiling again in the musty boys clubs the only girl looking for acceptance.

Her mind raced back further, to the 6-year-old sitting on her grandmother’s parlor floor, the little girl that was always being picked on, for the clothes she wore, for her hair, for her quiet demeanor, for the way she looked.

She was called ugly again.

She was being bullied again.

She was being told she can’t—again.

Told that enough and a defiant, impudent rage builds over time.

Shields (11-0, 2 knockouts) was looking for acceptance again. One of the world’s best female boxers made the bold move to venture into another unknown world for her, that of mixed martial arts, making her debut on the Professional Fighters League (PFL) circuit inside the bubble of the Ocean Casino Resort in Atlantic City, New Jersey.

The 26-year-old from Flint was fighting someone she was supposed to handily beat, 35-year-old Brittney Elkin, who had not fought in two years and the last time she was close to a ring was as a bartender at the 2300 Arena in Philadelphia.

It was not easy.

It wasn’t pretty either, but Shields persevered—as she’s done her whole life—after losing the first two rounds to secure a stoppage victory at 1:44 of the third round. 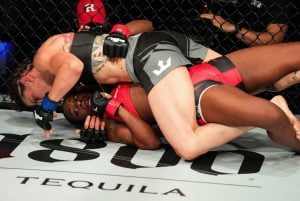 ATLANTIC CITY, NJ – JUNE 10: Brittney Elkin had Claressa Shields on her back throughout most of Shields’ MMA debut at Ocean Casino Resort on June 10, in Atlantic City, New Jersey. (Photo by Cooper Neill)

Within the first minute, Shields tried a few wild “strikes,” before Elkin eventually put Shields down. Shields is tremendously strong, and got back on her feet, before Elkin sent her down again.

Shields then spent the next minute on her back, taking shots to her head and stomach. It seemed evident Shields didn’t know what to do or how to get out of the situation.

The game plan was working exactly the way Elkin felt it would—get Shields off her feet and place her in uncomfortable situations. Elkin had control of the rest of the first round, with Shields on her back.

The second round started with Shields on her feet, then Elkin pulled a reverse and got Shields down again, allowing Elkin to dictate the direction where they were moving on the ground. Again, for major portions of the round, Elkin was on top of Shields, controlling the situation—and winning the round. 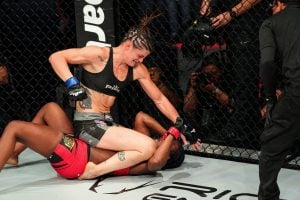 With less than a minute in the second, Shields was on her back taking rights to the head. Shields turned the tide in the final 10 seconds, placing Elkin in a defensive position and raining shots down on Elkin.

Within the first 18 seconds, Elkin took down Shields again. But it was Shields who had Elkin tied up, and it was Elkin taking punishment. With Elkin balled up and referee Gasper Oliver looking in closely, the fight was waved over, giving Shields the stoppage victory.

“I lost two rounds, but I told myself I wasn’t using the third round; I was getting taken down. I trained my butt off. I tried and Brittney was so experienced, and I wasn’t going to let her ground-and-pound. I was never on my back in a boxing match in my life. I tried hard not to lose, and I had a never-quit attitude. I told myself, ‘Never give up.’”

But Shields needs serious work if she’s going to advance in the MMA world. 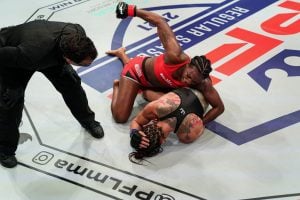 ATLANTIC CITY, NJ – JUNE 10: Claressa Shields’ superior strength won out in the end, getting a defenseless Brittney Elkin on the ground at Ocean Casino Resort on June 10, in Atlantic City, New Jersey. (Photo by Cooper Neill)

Ironically, the indominable “Cassius” Clay Collard (9-4-3, 4 KOs) was on the undercard of the Shields’ MMA debut. Collard was fighting Joilton Lutterbach (0-1) to remain in contention for a PFL playoff berth as a lightweight (155 pounds).

If you recall, Collard started 2021 a remarkable 5-0, handing three fighters their first loss, before settling back to lose his last two boxing matches. He’s been winning in the PFL world, and clawed out of some trouble in the first round against Lutterbach, who had Collard in a submission hold. Collard somehow broke free, and resorted back to boxing in the second and third rounds.

Collard wound up winning, going to 2-0 in the PFL.

It was a first-class production, with star power. NFL Hall of Famer Ray Lewis was octagon side as a commentator. The support staff and management were professional and accommodating, a lesson many in boxing can learn from. The PFL also runs a point system, and standings for each weight class, based on points won by victories and fights are won.

There were a few cringe-worthy elements, like the crowd noise pumped in from a ceiling speaker that blurted out faux sound seemingly on a loop. The other winceable offense were the mullets some of the fighters were wearing (thought they were dead in the 1990s).