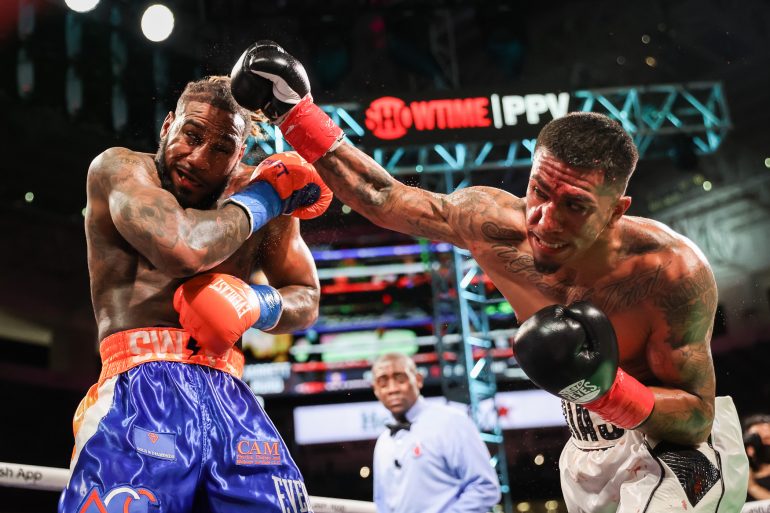 Some Panel members believed Jarrett Hurd should have dropped in the 154-pound rankings after being upset by middleweight Luis Arias. Photo by Amanda Westcott/SHOWTIME
06
Jun
by Ryan Songalia

MIAMI — Luis Arias entered Sunday’s fight winless in his three previous bouts, but left Hard Rock Stadium with his stock higher than ever.

The middleweight from Milwaukee, Wisconsin overcame a dubious knockdown call to win a split decision over former unified junior middleweight titleholder Jarrett Hurd. Two judges scored the fight 97-93 and 96-93, while the third had it 95-94 for Hurd.

Arias, who was training for the first time with Ismael Salas, says those closest to him had suggested that he give up boxing after suffering two losses to Daniel Jacobs and Luke Keeler, and drawing with Gabriel Rosado.

“The game plan was to jump on him, get the early lead and keep it,” said Arias.

“I felt like in the middle rounds I was wining the fight but you never know because I wasn’t the A-side in this fight. I buzzed him a lot especially on the inside. If we were fighting at 154, he would have gotten knocked out. Everybody knows it.”

Hurd was coming off a harder-than-expected win over Francisco Santana in January 2020.

“I’m not sure what went wrong tonight. I believe I won the fight. I had a knockdown. I could make a hundred excuses but it wasn’t a great performance,” said Hurd, who says the ring was slippery due to rain taking place at the stadium, which he says impacted his ability to box.

From the opening bell, Hurd seemed to have shirked his defense in favor of welcoming a trade-shot brawl with Arias (19-2-1, 9 KOs). That strategy didn’t pay off, as Arias, also 30, took the opportunity to land with both hands, stunning Hurd repeatedly.

The bout began to swing briefly in the sixth, as Hurd’s durability kept him in the fight long enough for Arias to tire. Hurd switched his target downstairs in the following round, but the punches were too far south, as they landed well below the belt, sending Arias to the canvas twice, and risking a point deduction.

Referee Chris Young made a controversial call in round nine when a punch that appeared to miss behind Arias’ head was called a knockdown. Arias appeared to slip on the wet canvas, but the call seemed to awaken him as he pushed forward, landing big punches in the rest of the round.

Both fighters had strong tenth rounds, but in a twist of irony, Arias may have been legitimately knocked down when they traded right hands at the final bell.

There was far less drama in the following bout, a one-sided drubbing of Delvin Colina by former two-division titleholder Badou Jack in a ten-round scheduled light heavyweight bout.

Jack (24-3-3, 13 KOs) scored three knockdowns in the fourth round, the first coming from a right hand that sent Colina (15-1, 13 KOs) into the ropes. The following two knockdowns were the products of body shots, trigger the three knockdown rule in Florida.

Colina, a relative unknown from Machiques, Venezuela, was stepping up way in competition for the fight after fighting exclusively in Venezuela and Colombia.

Colina was a late replacement for Jean Pascal, who was originally scheduled to face Jack in a rematch of their 2019 thriller, which Pascal won by split decision. That matchup was scrapped after Pascal tested positive for four different banned substances in a pre-fight doping test.

Jack, a native of Sweden, says he plans to campaign at cruiserweight in the future.