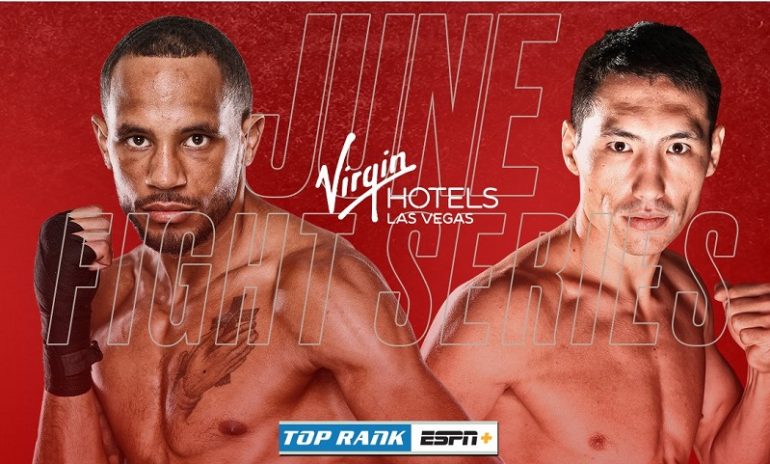 Rob Brant vs. Zhanibek Alimkhanuly
28
May
by Francisco Salazar

The 10-round bout will take place at The Theater inside the Virgin Hotels Las Vegas, in Las Vegas, Nevada, and will precede the main event between former Ring Magazine lightweight champion Vasiliy Lomachenko and Masayoshi Nakatani.

“This is a fantastic doubleheader featuring a living legend in Lomachenko and a pair of middleweights who are closing in on a world title opportunity,” said Top Rank chairman Bob Arum. “Zhanibek is relatively young in the pro ranks but he has long wanted to fight the best available opposition. Rob Brant didn’t hesitate when offered this fight.”

Brant-Alimkhanuly is a clash between middleweights ranked in the top 10 by The Ring. Brant and Alimkhanuly are ranked Nos. 7 and 9, respectively.

The 30-year-old Brant (26-2, 18 knockouts), who is originally from Saint Paul, Minnesota, and now resides in Dallas, Texas, stopped Vitali Kopylenko after Round 5 of his mos recent bout, on August 22. The fight took place over a year after he was stopped by Ryoto Murata, in Osaka, Japan.

Brant has won four of his last five bouts.

Alimkhanuly (9-0, 5 KOs), who is originally from Kazakhstan and now lives and trains in Oxnard, California, most recently fought on October 9, scoring a vicious knockout of Gonzalo Gaston Coria with one second remaining in Round 2. The fight took place almost a year after knocking out Albert Onolunose of Canada in Round 6.

The 28-year-old has stopped four of his last five opponents. He is managed by Egis Klimas.