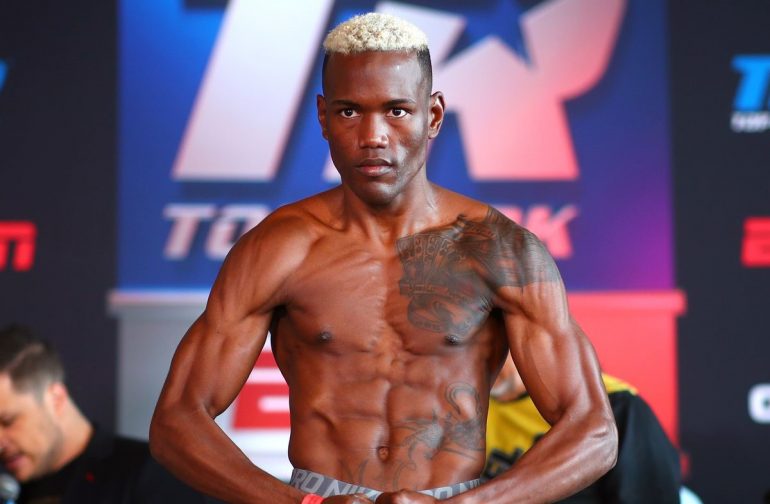 Photo by Mikey Williams/ Top Rank
26
May
by Anson Wainwright

It’s a crossroads fight for both men and Matias knows he can’t afford to lose like he did against unheralded Petros Ananyan on the Deontay Wilder-Tyson Fury II undercard in February 2020. He has since rebounded to stop previously unbeaten Malik Hawkins in seven rounds.

“I see him as an opportunity to be back on top as I was before my defeat,” Matias (16-1, 16 knockouts) told The Ring through Fernando Gaztambide. “[It is an] important fight.

“Watching his style and my style this fight will end in a KO, I have no doubt about it. I’m really his toughest test yet.”

The 29-year-old has put the pedestrian performance against Ananyan behind him.

“I have recovered,” he said. “I can beat five undefeated opponents in a row and still my defeat will be there and will not be erased.”

In preparation, Matias has enjoyed a 12-week camp in Puerto Rico, under the watchful eye of Freddy Trinidad. He has regularly sparred unbeaten lightweight William Zepeda. Matias is ready and has a simple message for Jukembayev.

“I am the pride of Maternillo,” he proclaimed. “All the best. May the best man win.”

Matias’ promoter, Juan Ivan Orengo, of Fresh Productions Boxing, appreciates it won’t be easy for his charge but expects him to get the win.

“It’s a tough fight for both,” admitted Orengo. “It’s an IBF eliminator, the winner gets the No. 2 position. [It’s a] tough fight but Subriel is winning by KO.”

Jukembayev (18-0, 14 KOs) is a vastly experienced amateur from Kazakhstan, who moved to Canada to turn professional. Since then, the 30-year-old southpaw has stopped Patricio Lopez Moreno (KO 7), Ricardo Lara (KO 2) and picked up valuable experience from savvy veteran and former lightweight titleholder Miguel Vazquez (UD 10).

The Showtime event, headlined by Nordine Oubaali vs. Nonito Donaire, plus undercard action, will be broadcast at 9:00 p.m. ET/ 6:00 p.m. PT.