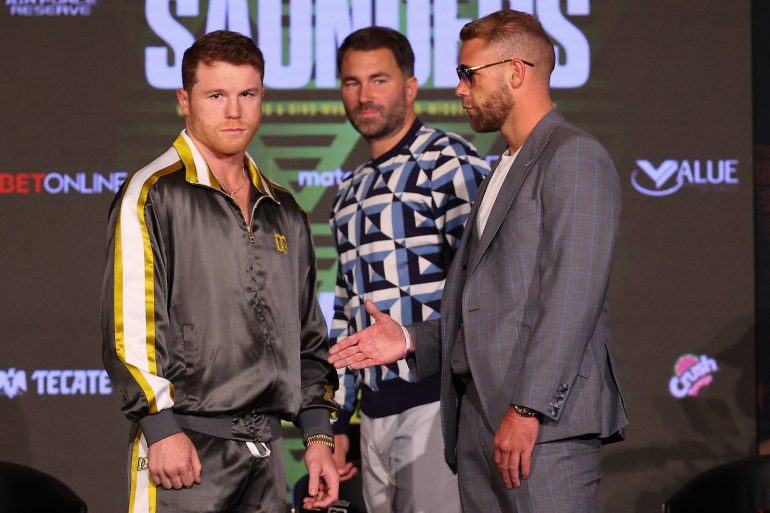 Photo by Ed Mulholland/Matchroom
06
May
by Dan Rafael

ARLINGTON, Texas – WBO super middleweight titleholder Billy Joe Saunders said he is not like some other Canelo Alvarez opponents he believes turned up for their purse but did not truly come to win.

Saunders did not mention any names but he very well could have been talking about Alvarez’s two most recent foes, Avni Yildirim and then-Ring champion Callum Smith.

Alvarez drilled Yildirim in the third round of a mandatory WBC defense in February in which Yildirim did not appear to seriously try. In December, Alvarez cruised past Smith, who seemingly was content just to go 12 rounds, to take his Ring and WBA titles and win the vacant WBC belt.

Saunders insisted at Thursday’s fight pre-fight news conference that he will be different because he is coming to the ring on Saturday (DAZN, 8 p.m. ET) at AT&T Stadium for no other reason than to emerge victories and as the unified world champion.

“I’ve been boxing all my life,” Saunders said, seated a few away from Alvarez. “I’ve been boxing since I was 5 years old. We can all have the rough, tough talk growing up as kids. I’m here for a reason. There’s no other reasons for me to be here apart from to win. Not about fame or anything else, to win.

“I don’t think we’ve had somebody come to win for a very long time. We’ve had a lot of people turn up, collect checks and fly out but we haven’t had the heart, soul and IQ that I’ll bring to the ring on Saturday night to win.”

The 31-year-old Saunders (30-0, 14 KOs), a former middleweight titlist before moving up in weight, will be making his third super middleweight defense to Alvarez’s second, and although Saunders has been known to let the trash talk fly, he was cordial toward Alvarez (55-1-2, 37 KOs), 30, of Mexico.

“I can’t talk what he’s done down,” Saunders said. “He’s done brilliant things for boxing. He’s a good champion but, like I said, there’s a time in life where you get tested. Sometimes when you forget where you come from and forget all those hard things that’s brought you to where you’re at,  sometimes that can make it difficult on yourself. I think he’s going to be bumping into the wrong man Saturday night to be going home with titles. I’m looking forward to a very good fight but most definitely the win.”

“He has an amateur pedigree is second to none. Everything is there and we’re ready for the job,” Tom Saunders said of his son. “This is what we’ve been waiting for. He’s trained all his life for it. We’ve left no stone unturned and on fight night you’re going to see something special. There’s only one winner, that’s Billy Joe Saunders.

“I’ve been speaking to a lot of people back home and the U.K.’s right behind him. There’s a lot of gypsy magic in this fight. There’s a spell been cast so we’ll definitely see something special.”

Alvarez will be the overwhelming favorite for a crowd expected to be around 70,000, but Saunders said he has no concerns or nerves about it being a Canelo house.

“I think I’ve been up against the crowds before. I’ve traveled as an amateur to the Olympics game at 18,” he said. “There’s no bigger pressure on someone’s shoulders when they’re stepping in front of millions of people there.”

Saunders also scored one of his biggest wins in 2017 when he went to David Lemieux’s turf outside of Montreal and won easily.