Jose Zepeda-Hank Lundy set for May 22 in Las Vegas 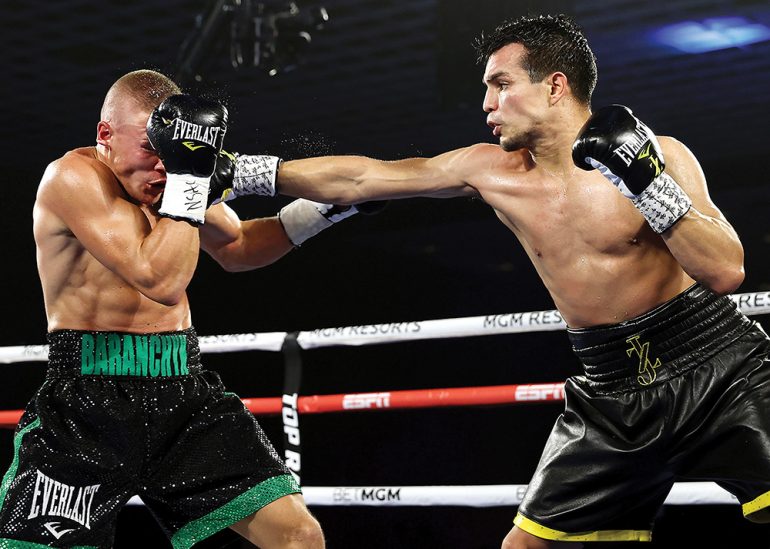 Zepeda (right) in his war with Ivan Baranchyk. Photo by Mikey Williams/ Top Rank via Getty Images
05
May
by Ryan O'Hara

Jose Zepeda will fight for the first time following his memorable rumble with Ivan Baranchyk.

Zepeda will face battle-tested Hank Lundy on May 22 in a scheduled 10-round bout at Virgin Hotels Las Vegas.

The bout will serve as the chief support to the undisputed junior welterweight world championship featuring The Ring Magazine champion Josh Taylor and Jose Ramirez.

Zepeda (33-2, 26 KOs, 2 NC), 31, of La Puente, California, was initially tabbed to battle Pedro Campa (32-1-1, 21 KOs). However, the Nevada State Athletic Commission declined to approve the Mexican. As a result, a replacement opponent was sought and was found in Lundy.

According to sources reporting to The Ring, Philadelphia’s Lundy (31-8-1, 14 KOs), who unsuccessfully challenged Terence Crawford for a junior welterweight strap in June 2016, had shown interest in fighting Raymond Muratalla (11-0, 9 KOs), but that bout was turned down by Top Rank.

Lundy has not fought since February 2020, when he outpointed Ezequiel Victor Fernandez over eight rounds in Delaware.

Zepeda rose from the deck four times to score a fifth-round knockout of Baranchyk in The Ring’s 2020 Fight of the Year October 9 at MGM Grand Conference Center in Las Vegas.

Aside from Taylor-Ramirez and Zepeda-Lundy, Dominican junior welterweight prodigy Elvis Rodriguez (11-0-1, 10 KOs) will square off against Kenneth Sims Jr. (15-2-1, 5 KOs).

Ramirez (26-0, 17 KOs), of Avenal, California, and Taylor (17-0, 13 KOs), of Scotland, will put their undefeated records on the line as well as their championship belts. Ramirez holds the WBC and WBO straps, while Taylor possesses the IBF and WBA titles.