Andy Ruiz gets up once more to decision Chris Arreola

Andy Ruiz Jr. beats Chris Arreola to the punch during this (one of many) heated exchange during their showdown at Dignity Health Sports Park in Carson, CA. Photo by Frank Micelotta/Fox Sports/PictureGroup
01
May
by Joseph Santoliquito |

Andy Ruiz admits he heard the words. He believed them, too. The former WBA, IBF and WBO world heavyweight titlist had no choice. The truth pinched and provoked him. They caused him to reflect more than he had before, because he knew that if he didn’t listen this time, it would come crashing down far worse than it ever did on December 7, 2019 in Saudi Arabia.

That’s the night Ruiz lost the belts, and for a brief spell, thought he lost everything in his rematch with Anthony Joshua.

What he didn’t lose, after some harsh self-inventory, was himself.

That came spilling out on Saturday night against 40-year-old Chris Arreola, when Ruiz patiently pieced together a unanimous 12-round decision over the very game veteran before a sellout of 3,940 at Dignity Health Sports Park in Carson, California.

“Chris is a veteran and a hard puncher,” Ruiz said. “We did what we had to do tonight. We got the victory that we wanted. I was at my lowest point and now I have to climb the ladder again. I’m thankful for the victory and I’m ready to move on to the next.” 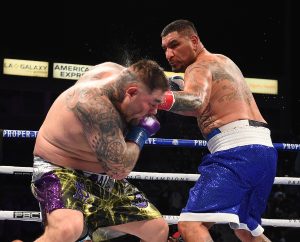 Arreola (38-7-1, 33 KOs) did show one flash, when he set up Ruiz with a jab in the second, followed by a clubbing right on the side of Ruiz’s head, forcing him down with just under two minutes left in the round.

“He got me with a good clean right hand in the second round,” Ruiz said. “I was too overconfident and dropped my hand a bit. Hats off to him. We just kept pushing and pushing. I switched up and started focusing on counterpunching and working the body.

“I felt a little rust and I know other fighters can relate to that. If he wants to run it back, we’ll run it back with him.”

Ruiz may not have to. Other than losing the second round, Ruiz was easily the superior fighter. It was 16 months since he last fight, the longest layoff Ruiz had between fights, a month later than Ruiz’s second-longest layoff, which was the 15 between his December 2016 loss to Joseph Parker and March 2018 victory over Devin Vargas.

Ruiz weighed 256, the lightest he’s been since he weighed 252¼ in a 10-round victory over Kevin Johnson in July 2019. That was a 41½-pound difference from what Ruiz weighed for the Joshua rematch, which he weighed a career-high 297½. Arreola came in at a career-low 228½.

Working with new trainer Joe Goossen, Arreola boxed well, but he couldn’t keep Ruiz off of him.

Arreola had a few flickers of hope. In the second, Arreola forced Ruiz down when he missed with a jab, then followed up with a jolting right to the side of Ruiz’s head. Early in the third, Arreola did more damage, with a counter left hook.

“I just have to get back to work,” Ruiz said. “I learned a lot about throwing different combinations in training, but the rust showed in the ring. Arreola was very good tonight. When you go down, you just have to climb back up. That’s exactly what I did. I got dropped, but I got up and got the victory.

“I could have done a lot more. I couldn’t really find my distance, but some of that was Arreola doing a good job. I could have kept my hands up better, but I just need to get back in the gym and stay busy. I got a little overconfident in the early rounds. The most important thing was that we came back and got the victory.

“I’m going to stick around this weight, but I’m going to tighten everything up. I faced a strong veteran who knew exactly what he was doing.”

By the mid rounds, Ruiz began taking over. In the eighth, Arreola may have hurt his left arm when he took a Ruiz right in the left shoulder blade. Arreola shook his left arm numerous times as the fight wore on.

Other than the knockdown, Ruiz was in firm control, mixing his combinations and even getting up on his toes in a few rounds.

“I respect the judges, but I guess beauty is in the eye of the beholder,” Arreola said. “He might have won, but don’t tell me I only won two or three rounds. I got hit in the shoulder and it kinda threw it off. It wasn’t a big deal though. It’s a part of boxing. I didn’t take too much punishment. I’m ready to run it back with Andy.

“A lot of punches he threw were hitting my gloves. He never put me in danger. It’s dejecting to not get the respect from the judges that I feel I deserve. There’s no moral victory. I came here to beat Andy. He might have beat me, but I felt like he won seven rounds at the most.

“I give me and Joe a lot of credit. We trained hard for this fight. I did everything I had to do in the gym. I absolutely hurt him, but Andy is a dangerous fighter. I didn’t want to get hit with a sucker punch like Anthony Joshua. I was a better fighter than Andy Ruiz expected. This version of Ruiz would knock Joshua out, but I was in great condition and ready for everything he had to offer.”

Afterward, the 31-year-old Ruiz did not rule out a future fight against Luis Ortiz, who was sitting ringside.

“A fight against Luis Ortiz would be an exciting matchup. I have to get back to training so I can keep feeling better in the ring. I’m actually happy to get the 12 rounds in.”

In the co-feature, Abel Ramos made it a Ramos’ family night, following his nephew Jesus’ earlier victory with a win of his own. Abel broke up Omar Figueroa, Jr., who could not answer the bell for the seventh round in a scheduled 12-round welterweight fight.

Ramos (27-4-2, 21 KOs) started slow, then gradually pounded Figueroa (28-2-1, 19 KOs) with a steady diet of right uppercuts. By the sixth, those punches carried a toll. Figueroa was spitting blood and decided not to continue.

“Omar is a very tricky fighter,” Ramos said. “He has an awkward defense and it was hard to catch him clean at first, but the fight overall went as planned.

“I trained so hard for this fight. I knew my career was on the line. I knew I needed a win and I knew Omar would bring a good fight. I’m glad to be back on the winning side and I’m ready to take on the best of the division.

“We trained to attack the body. Our plan from the beginning was to pressure him. We wanted to score points to the body. I could hear him groaning and I knew once I hurt him bad, that the fight was over.

“I missed the feeling of the crowd cheering. My adrenaline was through the roof. They give you excitement and we missed that in boxing.” 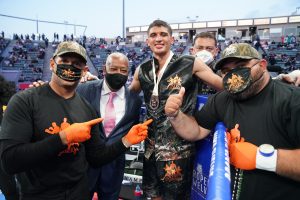 In a scheduled 12-round, junior middleweight bout, the towering 6-foot-6 Sebastian Fundora, the Ring’s No. 10-rated 154-pounder, and Jorge Cota went to war. Through four rounds, they threw a combined total of 203 punches thrown—200 were power punches.

“I’m extremely grateful to fight in front of the fans tonight,” Fundora said. “It was fun to hear the cheers, the boos and everything. I’m honored to be in this position. It was a good trading fight. We were hitting each other, but my punches were doing more damage and that’s why the referee stepped in. I think he could have been stopped earlier in the round. I just kept fighting until the end.

“I saw his leg wobble in the first round, but he took it and kept coming. The second time I saw it, I knew I had to go for the kill. My message to the rest of the division is that we’re here. If you’re ready for war, we’re ready to take it. Bring it.” 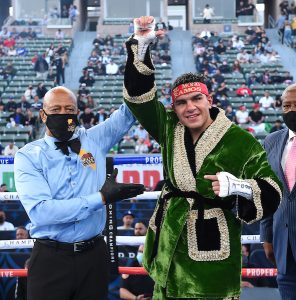 Southpaw Jesus Ramos (16-0, 14 KOs) remained undefeated with a steady attack against Javier Molina (22-4, 9 KOs) in a winning a 10-round decision. Ramos, a 20-year-old welterweight, was effective with a consistent body attack mixed with hooks and uppercuts.

The victory marked the first time Ramos went 10 rounds. Molina had a point taken away in the seventh by referee Gerard White for punches to the back of the head.

“It was my second time going the distance and that’s what we wanted,” Ramos said. “We love knockouts, but we’re glad at this point in my career that I got the experience. I thank Molina for taking the fight, he’s a great fighter.

“I might have been looking for a knockout too much in the early rounds. I got used to it and I settled down and I felt like I was breaking him down little by little. He was trying to survive a little bit, so it made it harder to get the knockout.

“I learned a lot today. I’m going to keep building on that. I feel like I have a lot of momentum. It was a big step up for me and I feel like I showed a lot. I showed I have good conditioning and good movement along with my power.

“My father told me to invite him to come to me. We were pressuring him to start. My dad had me change it up. He came in a little bit, but then he backed off. That’s how I tried to counteract his movement.”