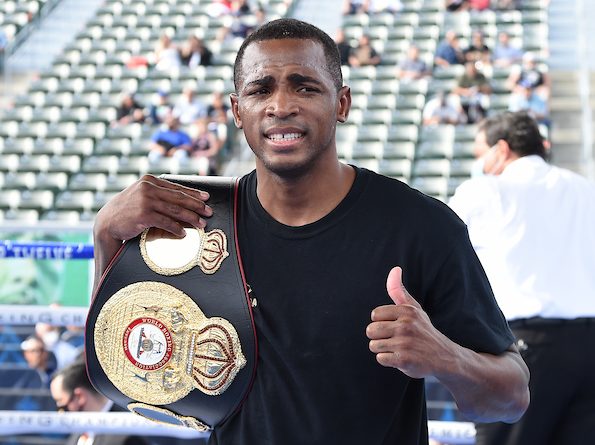 CARSON, CA - MAY 1: Erislandy Lara after defeating Thomas LaManna on the Fox Sports PBC fight night on May 1, 2021 at Dignity Health Sports Park in Carson, CA. (Photo by Frank Micelotta/Fox Sports/PictureGroup)
01
May
by Joseph Santoliquito |

Erislandy Lara didn’t really need much time to place Thomas LaManna on the canvas with a picturesque straight left hand to knockout his terribly overmatched opponent to secure the “regular” vacant WBA middleweight title on Saturday night from the Dignity Health Sports Park in Carson, California, on FOX Sports.

The fight was one of the featured bouts on the Andy Ruiz-Chris Arreola PBC FOX Sports Pay-Per-View undercard. 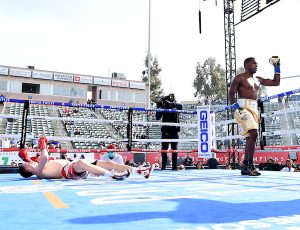 CARSON, CA – MAY 1: Erislandy Lara vs Thomas LaManna on the Fox Sports PBC fight night on May 1, 2021 at Dignity Health Sports Park in Carson, CA. (Photo by Frank Micelotta/Fox Sports/PictureGroup)

LaManna was clearly out of his class and it showed.

“(LaManna) said at the press conference that he was going to knock me out, but he ran right into that punch,” Lara said. “Maybe he was overthinking it all along.

“I felt strong and sharp tonight at middleweight, but I still want all of the big fights at 154-pounds too. I want the winner of the Jermell Charlo-Brian Carlos Castano unification fight. (WBC Middleweight Champion) Jermall Charlo is like family, we worked in the same gym for years, but this is a sport and I’d welcome the challenge.

“I feel great physically. I’m going to keep doing this until my body tells me I can’t do it anymore. I don’t feel like I’ve taken a lot of punishment in my career and I know I have at least another three years of my prime left.” 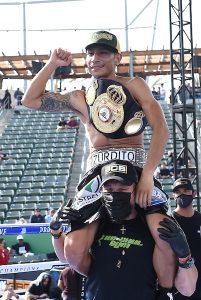 “I am beyond happy right now,” Ramirez said. “I’m just elated and moved by having been able to fulfill the promise I made to my baby boy Eduardo Ramirez Jr. He just turned two years old and I wasn’t able to be there to give him a hug for his birthday, but I had promised him that I would bring the title back home to him as a gift, and that is exactly what I’m doing now.

“You have to have a stone-cold mindset, and that’s what we had to finish Avelar off. We were able to connect the right combinations to finish the fight off exactly how we wanted.

“This was a perfect coronation. To be honest, I would now like to have the chance to fight against Leo Santa Cruz. I previously fought against Miguel Flores, who barely lasted 4-5 rounds against me, but Leo couldn’t knock him out. This convincing knockout should be my ticket to have that opportunity.”