Xander Zayas continues to climb toward the future 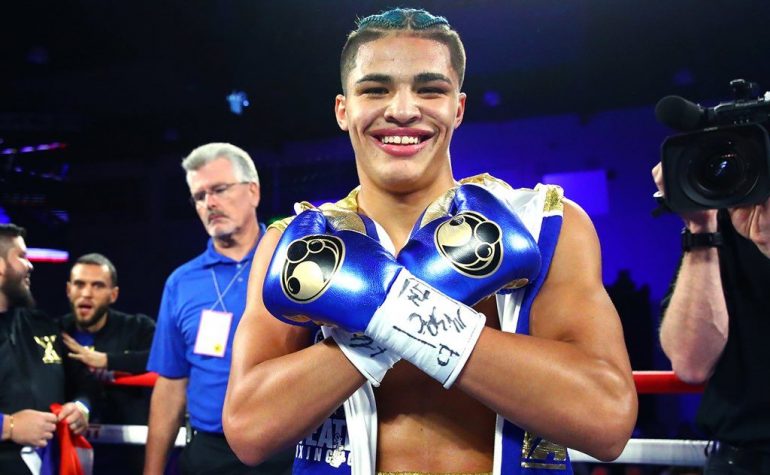 All five are rising prospects—like Zayas. All five have recently taken their first loss—unlike Zayas (7-0, 5 knockouts).

It’s a streak the 6-foot teenager looks to keep intact against 6-foot-2, 26-year-old Demarcus Layton (8-1-1, 5 KOs) in a six-rounder this Saturday night (ESPN/ESPN+/10 p.m. ET/7 p.m. PT). The fight will appear on the undercard of WBO featherweight titlist Emanuel Navarrete’s title defense against Christopher Diaz from the Silver Spurs Arena, in Kissimmee, Florida.

“I believe every opponent that is put in front of me is my toughest opponent, and I train each time like I’m fighting for a world title,” Zayas said. “I stay focused each time and I believe it’s all mental. The body can only get you so far in your career.

“I believe boxing is 90% mental and 10% physical. That’s 100% right. If you let your mind beat you, that’s when it’s tough to let your punches go, I try to stay as physically and mentally ready as I can. I keep my mindset in the right spot, so when fight time comes, there isn’t any struggle.”

Zayas admits he’s different than he was a year ago.

“I see better,” said Zayas, who is still growing. “I work on everything. Before, I was fighting four rounds and I had to come out punching a little more. Now, I’m being more aggressive, yet I’m more patient. I can take my time setting things up and see how to set up things.

“I want to make this clear, Vito and I are very close friends and I feel for him, I really do,” Zayas said. “I didn’t expect Vito to lose. It is boxing, and anything can happen. The only thing I wish for Vito is to get back mentally and physically—and I know he will. I wish him the best. He’s better than that.

“I see what happened to him and that reminded me that I have to stay on my A-game every single time I get in the ring. Layton is 6-2. It’s the first time I’ll be facing someone taller than me. I’ll work inside, I have to apply pressure on him every single round.

Zayas, who takes a 10½ shoe, says he’s making 147 comfortably. He’s not struggling to make 147. He’s not sure exactly how much longer he’s going to be 6-foot. His goal is to gradually work his way up to 168 pounds.

This will be the second of six fights Zayas plans for 2021, and working his way up to eight rounders.

Javiel Centeno, Zayas’ trainer, says it is still hard to tell just how good Zayas can be. Layton will be a step up in opposition.

“We have to remind ourselves that Xander is only 18, and where he will be when he is 20, 21, when he gets his man strength,” Centeno said. “I like how Top Rank and Peter (Kahn, Xander’s manager) are moving him. They’re being patient and steady.

“We keep Xander mentally sharp, and he’s fighting someone who is taller than him and already has that man strength. Xander was always short, and was an aggressive type of fighter, and he bloomed late. He’s gotten tall, and he used to love fighting inside. This fight will show how sharp he is with his offense and defense. He’s going to be that aggressive guy again and this time around he’s the smaller guy.

“Xander needs to look defensively sharp and get his punches off clean. I prefer to get the rounds in, and look sharp doing it. Xander knows how to adjust. He can make those adjustments in the ring—and that’s what separates him from other fighters around his stage of development.”