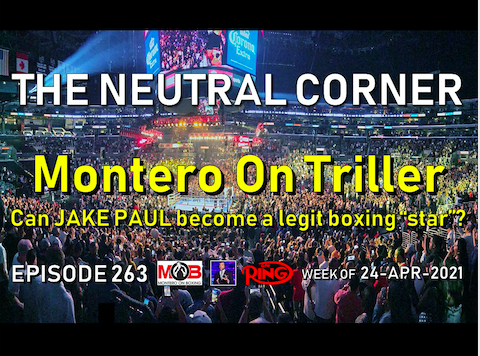 There was plenty of intoxication and clowning around from the commentary crew, which some fans didn’t appreciate, but many viewers thoroughly enjoyed. The festivities inside the Mercedes-Benz Stadium trended on social media all weekend.

The early indication is that the latest “Triller Fight Club” card sold well north of one million PPV buys. Those numbers dwarf the majority of recent American boxing PPV shows from rival promoters. So whether boxing purists love it or hate it, Triller and Jake Paul are not going away any time soon.

There were three fight cards of note on Saturday, April 17. In Atlanta, Jake Paul improved to 3-0 (3 knockouts) with a first-round knockout of former MMA champion Ben Askren. In the co-main, former junior welterweight titleholder Regis Prograis scored a TKO6 win over Ivan Redkach. It was originally ruled a TD6, as Redkach faked a low blow and was eventually carried out of the ring on a stretcher. However, upon instant replay review, it was clear that no foul took place. The Georgia commission subsequently changed the result to TKO6.

In Los Angeles, Tony Harrison and Bryant Perrella fought to a split draw in a junior middleweight fight. Several prospects scored wins on the undercard, including Omar Juarez (140-pounds), Efetobor Apochi (heavyweight) and the Barrientes twins. James Martin pulled the upset with a majority decision win over the previously undefeated Vito Mielnicki in a welterweight bout.

Nigel had an interesting take on Demetrius Andrade, who continues to search for his signature fight. “Andrade’s skill set reminds me of James DeGale,” he said. “You see the flashes of brilliance, but he’s not consistent. In the beginning of his fight with Williams, he looked good, like he might stop him. Then by the middle rounds I’m thinking to myself, “Here we go again.” Still, I have to admit, I want to see Andrade against either Charlo or Golovkin next.

Thad made some great points about boxing’s most unlikely rising star. “A lot of these people are poo-pooing Jake Paul,” he said, “but it’s just another Floyd Mayweather act. He did the same thing, he got fans to buy his fights hoping that he loses. That was his whole shtick. Paul is just playing the game the way Floyd played the game.”

Chris feels people are selling Anthony Joshua short in a proposed heavyweight showdown with Tyson Fury. “Everyone I speak to over here in the UK seems to feel that Fury is absolutely going to destroy Joshua,” he said. “I think Joshua deserves a lot more credit than that. The guy has only lost one fight. It’s the heavyweight division, anyone can lose a fight. Muhammad Ali lost fights, Lennox Lewis got knocked out, Klitschko was knocked out – it can happen to anyone. AJ is an elite heavyweight and he’s got a lot to his game. Yes, Fury destroyed Deontay Wilder, but he’s a one trick pony. I think Fury vs Joshua is a 50-50 fight.”