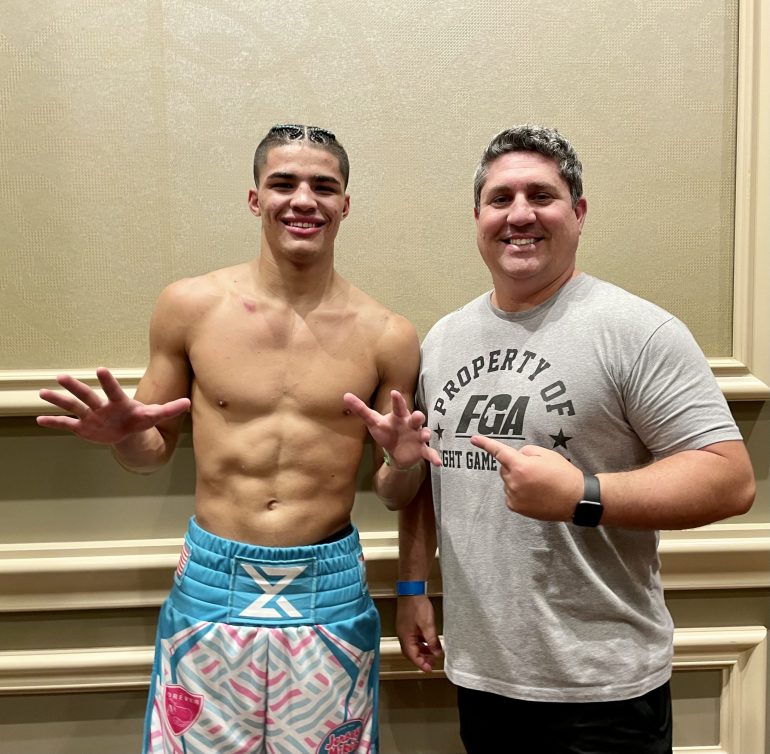 In the quiet, dark corner recesses of his home, Peter Kahn is hiding, hunched over on his cell, whispering. He has to. It’s around 2 a.m. and he’s trying not to wake anyone up. He doesn’t have enough time in a day to address the over 200 daily phone calls he takes and makes, so the flow often carries over into the next day.

It’s been relentless since Kahn, 49, was named by Triller Fight Club as its Chief Boxing Officer in March.

On Wednesday, Triller’s new CBO was checking fighters into Atlanta’s Omni Hotel for the Jake “The Problem Child” Paul-Ben “Funky” Askren showdown, which will be the main event of Triller Fight Club’s four-hour pay-per-view this Saturday at the Mercedes-Benz Stadium, in Atlanta, Georgia.

Checking fighters into hotels, making flight arrangements, buying and fetching coffee, making seating arrangements in major venues and sweeping up the trash afterwards is nothing new for Kahn.

Then again, he doesn’t exactly fall under what the typical definition of a CEO, COO or even in this case a CBO is supposed to do.

Kahn has never been afraid to put his hands down into the dirt, which started when he began working in this crazy boxing business for Don King in the mid-1990s, doing everything then from airport runs, to fighter pick-ups, to hotel check-ins, to licensing the fighter camps and running fighters for medicals.

Talk about Kahn today and the only thing that’s changed is the title—and his status.

He’s turning into one of boxing’s biggest power brokers. 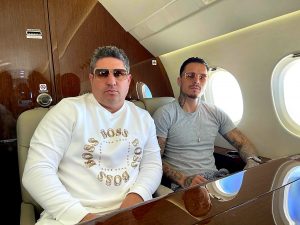 Perhaps the only thing beyond Kahn’s grasp is finding enough time in the day.

“This is by far the biggest challenge I’ve had in my boxing life, but the Triller Fight Club has a very strong team here that is implementing structure and I would say the most challenging thing is being in every conversation for visibility purposes,” Kahn said. “What happens is the amount of communication, via phone calls, emails and texts, has amplified exponentially. Whereas I might not have to be part of the execution of it, I am there for visibility and I have to approve a lot of things.

“Like I tell my fighters, the one thing you can’t shortcut in boxing is experience. The same goes with managing and life.”

As Kahn said this, he finished typing up the bout sheet for the Saturday show, just after checking in yet another fighter.

He’s doing 20 things at once. He says he’s learning to delegate better, though he says it with a hoarse, tired voice.

“Peter is the most knowledgeable person I ever met in boxing,” Kavanaugh said. “Peter truly loves the sport. He is also one of the most honest, honorable people I ever met. He understands the commissions and the fighters, and Peter also understands what we’re doing, which a lot of people don’t get.

“Our mission and our goal are to take this to a different level and expand it. Yet, respect the rules of purism. Peter was the only choice and we’re extremely lucky to have him. There couldn’t be a better, more efficient, more collaborative person for the job. Everybody loves working with him.”

Kavanaugh emphasized that Triller Fight Club is about being a full entertainment vertical. Triller bought Verzuz, a popular livestream music platform created by Swizz Beatz and Timbaland, in March and on Wednesday, Triller announced it acquired FITE, the premier global live-event and Pay-Per-View, SVOD and AVOD and streaming platform for sports and entertainment.

“We’re pushing e-commerce and Peter really understands the audience and brands today are pushing on tablets and phones,” Kavanaugh said. “We’re trying to widen boxing and making it akin to the Olympics or a Super Bowl more than anything else. We want every one of our events to be looked not as a specific boxing event, but like a Super Bowl, where a lot of people who don’t normally watch football watch it, because there is so much entertainment around it. That’s what we’re trying to build.”

At the eye of the boxing side is Kahn.

When the purse bid for Lopez’s IBF mandatory title defense was approaching against challenger Kambosos, Kahn, who manages Kambosos, felt the purse bid would be lower than what the market and Lopez’s star power merited.

Kahn felt he had to take matters into his own hands, trying to get his fighter the best possible deal. Kahn reached out to Kavanaugh via Zoom and then went out to meet the Triller head in February.

“I expressed to Ryan he would be paying a premium for the purse bid and there was no point in bidding and losing,” Kahn recalled. “We had to make sure it was beyond a respectable bid. With what Triller is doing, paired with great musical acts, it has a chance to be huge. We just secured Evander Holyfield and with the musical talent, it’s made the bid completely reasonable.”

As a result, Lopez will receive a career-best $3.9 million payday and Kahn got his client Kambosos an all-time high of $2.1 million (which is more than he’s ever made with all of his purses combined).

Soon after, Kavanaugh offered Kahn a role with Triller as its new Chief Boxing Officer.

“My fighters and affiliations are with everyone. I have fighters with Top Rank, Matchroom, Golden Boy, Lou DiBella, and this is a big, big key here, Triller is not signing fighters to promotional contracts,” said Kahn, who has no paper with any of the fighters he represents. Those are hand-shake deals and done at a standard 10-percent cut.

Triller is an event-driven company that’s looking to stage four to five fights a year. These are single, one-off events and it would be very rare to have a fighter appear twice on a Triller card.

It may be hard for any promoter to take issue with Kahn, since he has intimate involvement with most of them. Not only does he represent fighters with Top Rank, Matchroom, Golden Boy, DiBella and PBC, he also brokers sponsorship deals with many of them.

If Kahn doesn’t have a fighter in the ring, he’s most probably responsible for the logo on the ring mat.

A resident of South Florida, Kahn is currently juggling 18-hour work days. For every call he is on, he’s missing three. He makes sure he gets back, and sometimes getting back means getting back at strange times.

But many antennas rose in the boxing community when Triller won the Lopez-Kambosos bid.

“I understand that, but time will show that Triller is actually good for many of the traditional establishments,” stressed Kahn, a two-time Manager of the Year nominee by the BWAA. “We’re not competing for fighters, or in the same space as them. We’re producing live boxing, but we’re not recruiting fighters nor do we have the pressure of keeping fighters active throughout a whole year.

“I will say this, I’ve spoken to Eddie Hearn at Matchroom, Eric Gomez and Oscar De LA Hoya at Golden Boy, people at PBC and I’ve even asked Top Rank, to welcome them to a discussion to put any of their guys on these shows. The only requirement is that we make a compelling fight.

“I did my job as the manager for George Kambosos, because he is my client. Nothing has really changed. My favorite part of all of this is being a part of something that is introducing our sport to a new audience that can grow into life-long boxing fans.

“I’m still fulfilling my role as a manager—that’s first and foremost—to my guys. These guys entrusted me with their futures, and that comes before anything else.”

Then, Kahn went back to checking fighters into the hotel, spell-checking the bout sheet, making arrangements for one of his fighters, Aaron Aponte, this weekend on Matchroom’s Demetrius Andrade-Liam Williams card, and getting back to the myriad callers that tried to reach him while he was talking to The Ring.

“I’ll catch up,” Kahn says. “It may take two or three days, but I’ll catch up to everyone I missed.”

Even if it takes whispered calls in the dark in early morning hours.