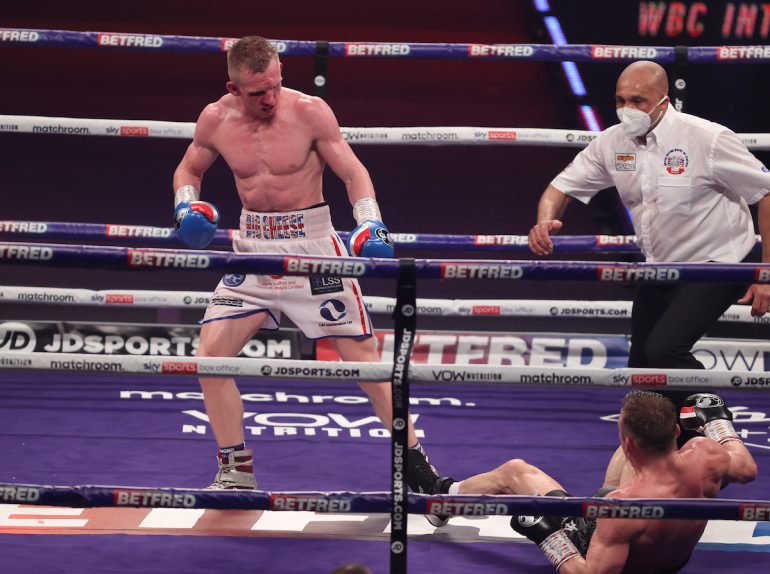 In an energy-sapping battle, Bermondsey’s Ted Cheeseman (17-2, 10 KOs) regained the British junior middleweight title courtesy of a devastating 11th-round stoppage of the previously unbeaten James Metcalf (21-1, 13 KOs). The official time was 3:10 as the fight was stopped after the bell rang to end the round.

Cheeseman, 25, was off to a great start and a big right in Round 4 set up a ferocious two-fisted attack. It was amazing that Metcalf survived, but more amazing was that the damage the Liverpool man absorbed lit a fire under him. The fight turned perceptibly and Metcalf shook Cheeseman with a right of his own in the seventh. It was an ebb-and-flow battle worthy of the Lonsdale belt being at stake.

The pair traded up-close in the second half, but when Cheeseman broke through again in the 11th, he wasted no time in closing the show. A brace of sharp rights set up a three-punch combination that culminated in an explosive left hook. Metcalf gamely beat the count but he was in no condition to continue and referee Ian John Lewis waved the fight over.

Highly touted heavyweight prospect Fabio Wardley (11-0, 10 KOs) maintained his unbeaten record by posting a fifth-round knockout of former two-time world title challenger Eric Molina (27-7, 19 KOs. The bout was largely devoid of worthwhile action until Molina broke through with a good right early in the fifth that stiffened the Brit’s legs. Aghast by the turn of events, Wardley opened up with both hands and floored Molina heavily in the corner. Referee Mark Lyson counted out the America at 0:52 of the round.

In a heavyweight 10-rounder, Nick Webb (17-2, 13 KOs) produced a stunning second-round triumph over Germany’s former two-time world amateur champion Erik Pfeifer (7-1, 5 KOs). The official time was 1:51. Three knockdowns in Round 2, all of which came via clean, effective power shots, forced referee Ian John Lewis to halt the action. Webb was once viewed as something of a prospect, but defeats to Dave Allen and journeyman Kami Sokolowski were hugely damaging. This upset win has breathed new life into his career.

Lightweight Campbell Hatton, son of former two-weight world champion Ricky, won his professional debut over Spain’s Jesus Ruiz via four-round decision. Referee Victor Loughlin scored the bout 40-36. Hatton, 20, was pretty wild in every session, which is perhaps expected given his youth, lack of amateur experience and the hype surrounding his surname. However, the Manchester man got the job done and that’s what counts.