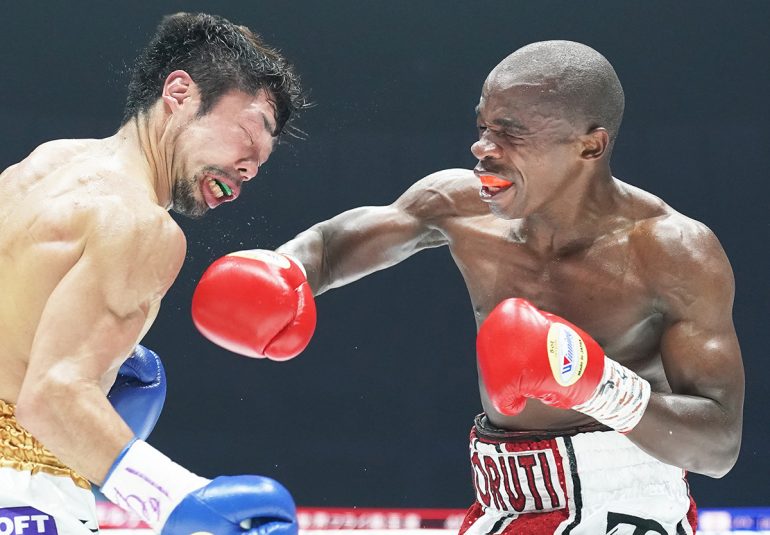 SUNNY EDWARDS WILL go into battle for the IBF world flyweight title against the formidable and decorated champion Moruti Mthalane on Friday April 30, live on BT Sport.

In what will be a high stakes card in London, Belfast star Michael Conlan (14-0) provides the chief support as he takes his first fight at Super-Bantamweight against the tough 14-2 Ionut Baluta. The Romanian is seeking to defeat a third consecutive Irish opponent after toppling TJ Doheny and David Oliver Joyce in his last two fights.

For ‘Showtime’ Sunny, 25, it will represent a first crack at world honours in his 16th fight as a professional, with the British super flyweight champion having won belts at both fly and super fly, including the IBF International and Intercontinental, along with the WBO International and European.

Since beating Ryan Farrag in October 2018, Edwards embarked on a run of six fights with titles on the line to cement his place in the world rankings.

Edwards is a confirmed admirer of his forthcoming opponent.

“Moruti is the most criminally underrated fighter, having not lost in 13 years and he is a proper, proper threat,” he pointed out. “This is no gimme or easy world title for Sunny – it is very, very far from that.

“I asked for this fight and, if you look back at press conferences or interviews, you can see that I have wanted it for some time. In my head, this is what was coming to me and it is finally here and I have got what I wanted.

“Now it is my chance to prove myself and this will be the best benchmark I could have. I have beaten Olympians and people who have mixed at European and world level, but this is real genuine world level. This is my introduction as I have not been there before.

“He is as legit as they come. A big puncher, 41 fights, 39 wins and 26 knockouts. If I go and do this, capture the world title in my 16th fight, nobody can really argue. This will qualify everything I have been saying – if I do it. Moruti is no pushover by any stretch of the imagination; he is a very, very, very good fighter.”

Mthalane, 38, is indeed recognised as one the greatest of all current champions, having won his first world title in November 2009 with victory over Julio Cesar Miranda for the vacant IBF flyweight title, which he followed up with successful defences over countryman Zolani Tete and current WBO world bantamweight champion John Riel Casimero.

After two further defences, the South African won the IBO flyweight title with a 2014 victory over Jetha Oliva and subsequently made three victorious defences of the belt.

He reclaimed his IBF title in July 2017 with a defeat of Muhammad Waseem and has since defeated Masahiro Sakamoto (TKO 10), Masayuki Kuroda (UD) and Akira Yaegashi (TKO 9).

“There can be no doubting that Sunny is up against a top-drawer world champion,” said promoter Frank Warren. “Mthalane possesses incredible experience and has beaten the leading guys around his weight, but I hope the timing is right for a changing of the guard at the top of the division.

“Sunny has demonstrated his readiness for taking on and, I hope, joining the elite and from his early days performing on our shows, I believed we had a special talent on our hands.

“It was up to us to recognise this by delivering the world title shot he craves and that is what we are doing. It will be a special night having Sunny fighting for a world title against a great champion.”

Edwards’ title tilt against Mthalane will represent the first fight of a new long-term promotional agreement with Frank Warren and Queensberry Promotions.

“I am made up, I am absolutely made up,” reacted Edwards. “I have made it no secret that I wanted to be with Frank and I see my future with Frank. I am glad that, after months of back and forth, we have come to the agreement and we are both in a position where I am sure we are happy.

“Frank has given me the platform and helped me build my name so that anyone who tunes into BT Sport even semi-regularly will have probably seen one of my fights. Over the last year or two I have been on often and maybe BT lets me get away with being a little bit more cheeky than anyone else would!

“I like it, I like the relationship we have and I am looking to increase that going forward. I am a loyal person and, unless I am treated unfairly, I will never up sticks and leave on a whim. I have been with my trainer for seven years, my management team from the beginning and, ideally, I would like to be with the same promoter for my whole career.

“The fights and the opportunity I have had shows that my promoter and my network are happy with me so I can’t be any more happy with that and the position Frank has allowed me to put myself in. Without Frank, the platform of BT and my management it would have been hard for me to do so.

“I am grateful and delighted to have another long-term deal with Frank – my third one already and I am only 25! I genuinely mean this, I hope this is a relationship that lasts throughout my career.”

Frank Warren added: “I have never hidden my liking and admiration for Sunny and I am thrilled he is signed up with us for the long term. He is proving himself a major attraction on BT Sport, not just with his undoubted boxing ability, but also his personality that shines through in the way he goes about his work.

“Sunny is a character, no doubt about that, which is something the sport always needs and I shouldn’t think he ever finds himself lost for words. The thing with Sunny is he can back up what he says with huge natural talent that I am sure will excel on the world title stage.

“Operating at the highest level is the next step for Sunny and I am thrilled to deliver his world title shot on April 30. It is what he wants and what we want for him so all our efforts have gone into securing him his shot at the earliest opportunity and I cannot wait to see it happen and see another world champion added to our roll of honour.”