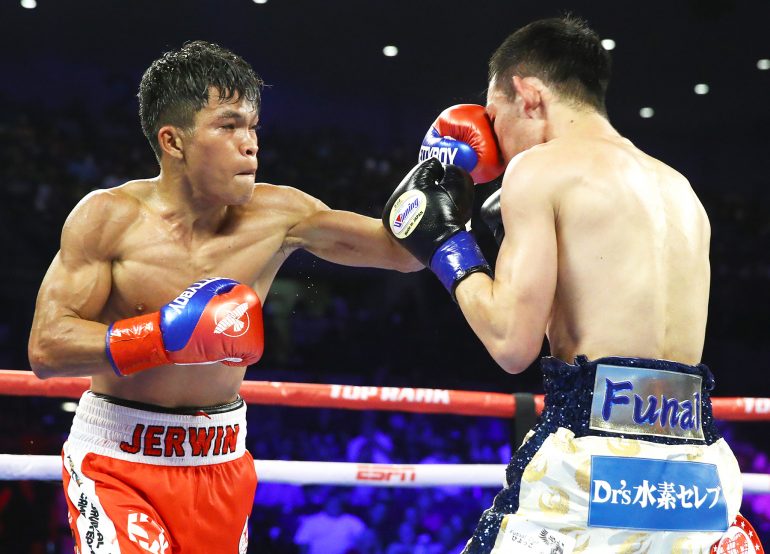 The two Filipino fighters will appear on the same card on Premier Boxing Champions card on April 10 at the Mohegan Sun Casino in Uncasville, Conn. The Showtime-televised card will be headlined by a welterweight bout between Jaron Ennis and Sergey Lipinets.

Ancajas (32-1-2, 22 knockouts) will finally meet mandatory challenger Jonathan Javier Rodriguez (22-1, 16 KOs), a year and a half after the fight was first scheduled, in the ninth defense of his IBF junior bantamweight title. The two were originally set to meet in November of 2019, but the fight was postponed twice before the Covid-19 pandemic knocked the fight out for the rest of 2020.

Ancajas, 29, of Panabo City, Philippines is currently signed with MP Promotions and Premier Boxing Champions, after years with Top Rank. He last fought in December of 2019, taking apart Miguel Gonzalez in six rounds in Mexico. Trainer Joven Jimenez says it’s important for Ancajas to make a big impression in his first fight with his new promotion.

“We expect a war. Rodriguez comes forward and Jerwin trained to come forward this time.”

Rodriguez, 25, of San Luis Potosi, Mexico is coming off a 147-second rust shaker against Julian Yedras in December.

Magsayo (21-0, 14 KOs) will have his second straight outing on a PBC card when he faces Pablo Cruz (21-3, 6 KOs) of Houston in a ten-round featherweight bout. Magsayo was last in the ring in October, winning a split decision over Rigoberto Hermosillo in a fight that was much closer than was to be expected against someone coming in off two straight losses.

Magsayo says he knows how important it is to make a statement in this next outing, if he wants to get bigger opportunities next.

“I am excited because my next fight should be a title fight but I’m not overlooking this opponent,” said Magsayo. “I expect him to be strong and give a good fight because he is a solid fighter and I’m ready for him.”

Marvin Somodio, who assists Magsayo’s head trainer Freddie Roach at the Wild Card Gym in Hollywood, said Roach has made some adjustments to Magsayo’s sparring after the underwhelming outing against Hermosillo. He expects Magsayo to make the impression here that he had hoped to leave in October.

“I’ve watched some of [Cruz’s] fights,” said Somodio. “He gets hit a lot, he won’t be able to handle Magsayo’s power.”