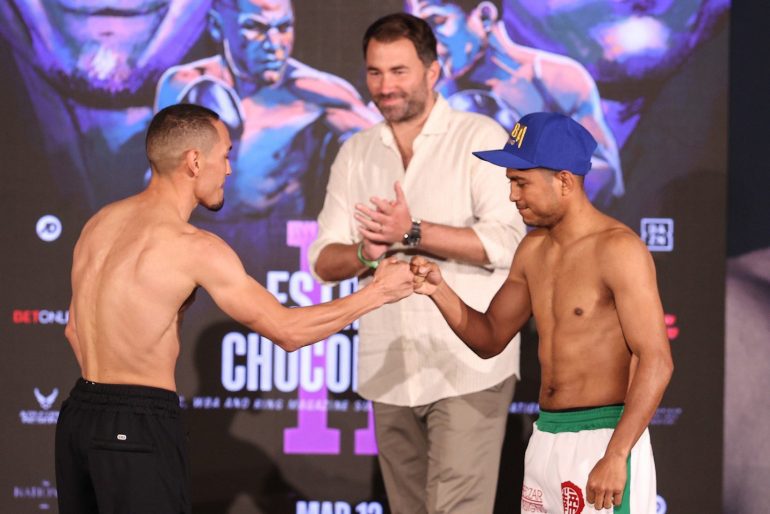 “It’s been a long wait,” Estrada, 30, said after Friday’s weigh-in at Thompson Hotel. “This fight means a lot to my legacy. Roman ‘Chocolatito’ Gonzalez is a hall of famer. But I know his strengths and weaknesses and we’re going to go for the knockout.”

Gonzalez, who earned Ring Magazine’s 2020 Comeback of the Year award for his WBA title-winning ninth-round stoppage of Kal Yafai after being counted out by most the boxing world following back-to-back losses to Srisaket Sor Rungvisai in 2017, was calm and smiling during the weigh-in. When DAZN’s Todd Grisham asked why he seemed so happy, the devote Christian replied: “We have God. We trained really hard and we’re going to win. God helped me get up when I was down (from the rematch KO to Sor Rungvisai).”

McCaskill, a 36-year-old Chicagoan, has been more brash and vocal going into the contracted rematch. She thinks Braekhus, who considered retirement last year, should have stuck with that plan.

“This is her last shot at a big payday,” she said of the future hall of famer. “We’re going to set the record straight this time and show everyone that the first fight wasn’t an accident.”

Braekhus, a 37-year-old veteran from Norway, was defiant during her interview.

“I’m better than her,” the former undisputed champ and pound-for-pound queen said. “Everybody saw that (with the first fight). She started all the trash talk as soon as she won the belts, so I had to come back and put her in her place. I’ll win, definitely, maybe by knockout.”

Kyoguchi promised to “fight like a champion.” Vega said fans can expect “a war between Mexico and Japan.”

“I’m a real fighter, a true warrior,” Williams said when asked why he agreed to fight a veteran who has faced the likes of Jermell Charlo, George Groves, Anthony Dirrell and David Benavidez so early in his career. “The game got messed up with too many fighters only looking for matchups that they can win. He’s going to try to ‘little brother’ me but my dedication to boxing will shine through.”