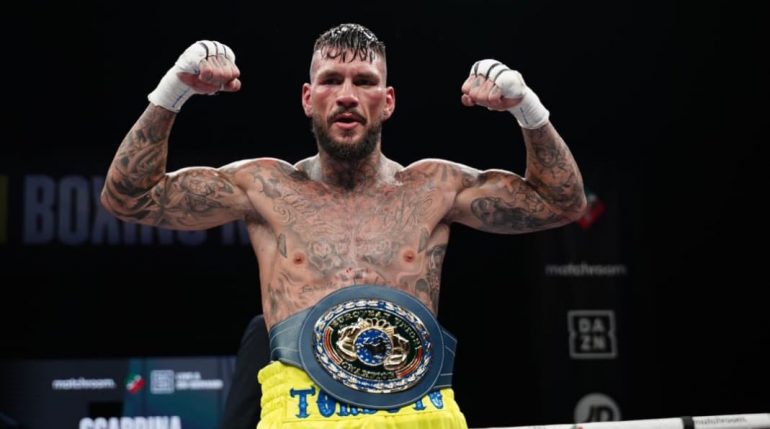 After a battle with Covid-19 knocked out his chances of fighting in 2020, Daniele Scardina returned from his long layoff to score his own KO.

The super middleweight contender rebounded from a slow start to knock out Cesar Nunez in the eighth round of their scheduled 12-round smasher at Allianz Cloud in Milan, Italy.

Scardina snagged a vacant secondary 168-pound title with the victory and notched his first knockout win since November 2018.

Scardina had not fought since October 2019, when he defeated Ilias Achergui by 10-round unanimous decision, which also took place at Allianz Cloud.

But despite the emphatic finish, it was not all sunshine and rainbows for Scardina early on.

In round three, Nunez connected with a hard left hand that clearly hurt Scardina. But just when he was about to jump in to capitalize, referee Giovanni Poggi warned both fighters to watch their heads, killing Nunez’s momentum.

Scardina took some hard shots from Nunez against the ropes in round six. However, he managed to rebound late with a left hook downstairs.

Scardina went back to boxing in round seven and worked consistently behind his jab, which caused significant swelling under Nunez’s right eye.

That was when the 28-year-old Scardina (19-0, 15 KOs), a native of Italy based in Miami, discovered the blueprint to defeating Nunez.

In round eight, he snapped Nunez’s head back with stiff jabs and mixed in some hard right hands that drew blood from his nose. A visibly exhausted Nunez swung for the fences, but Scardina used his superior head movement to evade the punches.

A short right uppercut badly discombobulated Nunez, and Scardina sent him sprawling across the ring from a follow-up barrage of punishment before crashing to the canvas. Poggi immediately called a halt to the fight at 2:55 of round eight.

Late in round five, Prodan connected with a left hand behind the ear that sent Cristofori to the canvas for the first time.

The 26-year-old Cristofori (11-3-2, 1 KO) appeared to lose his balance in the 10th round and gestured towards the canvas. Prodan saw an opportunity and connected with a big left hand that opened up a deep cut around his opponent’s right eye. The referee then immediately stopped the fight, which drew the ire of boxing fans and commentators alike.