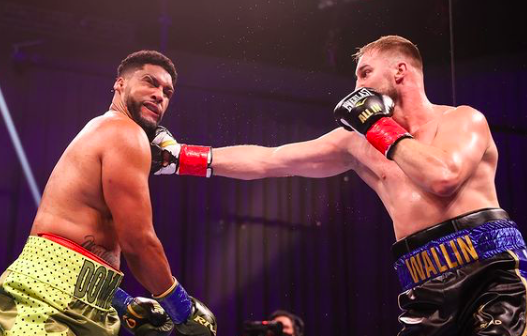 After 12 rounds, the judges’ cards confirmed what watchers saw: that Wallin landed the harder and cleaner shots on the vet who was looking for that last run to secure a late-career lotto fight. By scores of 116-112, 117-111, 118-110, Wallin got the nod in support of the Adrien Broner main event.

The 6-7 Breazeale had stumbled when given the opportunity to step up. He got stopped in round seven by Anthony Joshua in 2016 and was finished in the first by Deontay Wilder in May 2019. He’d not gloved up since then, and switched out trainers, from Virgil Hunter to Abel Sanchez.

The 6-5 lefty Wallin moved to NYC in 2017 and opened eyes when he hung tough against Tyson Fury in their Sept. 2019 scrap. Wallin rebounded with a win over Travis Kauffman in September 2020. 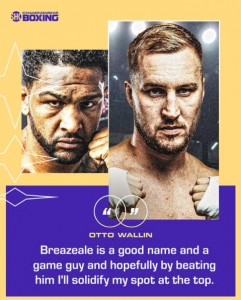 Wallin has the basics down pat, and he stays focused while listening to the advice of his corner. He keeps on edging up the ranks in the heavyweight class.

In the first, Otto looked cautious, but then he looped in a left hand, to let Breazeale know he wouldn’t be steam-rolled. Breazeale, who said training at altitude in Big Bear, CA benefitted him, said pre-fight he wanted to get going early, but he too was cautious. Wallin would back up, but find an opening, then pivot out of range. He had a mobility edge, for sure, that was apparent after two rounds.

In the third, Otto landed first on the ex college football QB, and he kept those feet moving. Coming in, Wallin had noted to me that he saw Breazeale as “plodding” and that looked to be the case after three. After the round, Gamache told “All In” Wallin he liked what he was seeing. Keep it up, stay smart, you are winning every round, he informed the Swede.

In the fourth, Wallin snapped a jab and then slid to his right. Breazeale wasn’t a step behind, he was two, or three, too often. After the round, Sanchez told Breazeale to not be head-hunting.

“Keep pressing, he’s wearing down,” Sanchez told him, while he stood, refusing the use of a stool to rest on. In the fifth, a counter left landed hard and clean for Wallin. His movement again impressed, he’d duck and slide out, and Breazeale would be left with nothing to do. “You have to make this a fight,” Sanchez told Breazeale after the session. On replay, we saw a sharp left hand back Breazeale up, and yes, it seemed as though Wallin’s confidence and accuracy were on the rise.

To round six–Breazeale, who started boxing at age 23, took Sanchez’ advice to heart. He upped his aggressiveness, he wanted to close the distance and not be so polite about it. “Much better round, much, much better round,” Sanchez told him. Breazeale did use the stool after that round. “You may have to help him quite a little bit more,” Gamache told the Swede. 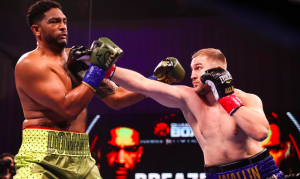 Wallin finds a home for that Everlast. Photo by Amanda Westcott

On to round seven; Wallin found a home for the left hand, he wanted to give Gamache what he wanted, take harder swings with the axe.

“How hard did you work for this,” Sanchez asked.

“Too damn hard,” Breazeale replied, as he gulped for oxygen.

In round eight, Breazeale’s hand speed deteriorated more. He was trying to work hard, and press the issue, but he was feeling 35, I think.

A right uppercut landed for Breazeale, though, and he wasn’t going down easy.

Maybe he’d find energy he didn’t think he had, because Wallin was looking a bit tired now, too. 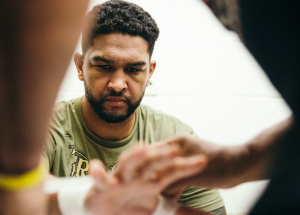 Coming in, Breazeale had to know his window of opportunity was closing. He’d need to beat Wallin to keep hope alive for another crack at a crown.

Then, in the ninth, Wallin got back to being focused on moving more. Breazeale caught Otto clean late, his best connect of the night.

In the tenth, Wallin stayed aware that he was probably up on the cards, and as long as he didn’t get caught with something he didn’t see, he’d get the W.

In the 11th, both men went to the mat, but after the thud, they dusted off and went back to boxing. Gamache called for Otto to keep pivoting, moving, staying wary of the right hand of Breazeale.

Props to Breazeale, he kept on whacking away right to the finish.

And Otto avoided the right in the 12th, and uppercuts aimed by Breazeale, well enough to hear that final bell.

To the cards they’d go.

We heard from the fighters after:

“It was nice. I think I had an advantage because I fought here before. I was more focused this time and I think I came out better than what I did last time.

“We knew coming in that I had better footwork, better speed so I wanted to use that. And I have good defense too. He hit me here and there but nothing too serious. I said before the fight that I just gotta do what I’m good and that’s what I tried to do.

“I am a good counterpuncher, I knew that. I’ve been having great sparring for this fight. I had been studying him a lot, I knew he that he was slower than me and doesn’t have the greatest defense always. I knew that I’d be landing my counters.

“I felt like after a while when I was feinting him, he kinda looked scared. He was kinda blinking and stuff. Or maybe the eye affected him, I don’t know. Or maybe his past experiences and being off for a little while.

“I knew he is a strong guy and he takes a pretty good punch. I mean, he was knocked out by Joshua and Wilder but those are the biggest punchers in boxing. I’ve seen him take huge shots from other guys and didn’t go down. So I wasn’t that surprised. I wish I could have done a little better and knocked him down.

“All in all, this was a great experience for me. I’m still learning, I’m 30 years old but I haven’t been at high level very long. I’m not there yet but I’m getting better and I feel like I’m improving every fight.

“I think there are a lot of guys out there, a lot of good fights. I’ve been so focused on Breazeale that I haven’t thought much past this but I hope to stay busier now. Before this I had a fight in August but before that I had long breaks. I hope to get a fight soon.

“I don’t think he ever hurt me. When you’re a southpaw and fight an orthodox fighter, sometimes you step on feet and lose balance. That happened to both of us a few times.

“My ultimate goal is to be champion. But I have to keep improving, I’m not there yet. I’ve got a lot of work to do, I’m getting better. I’m not so focused on who I fight, I just want to fight, keep it stepping it up and when I get another shot, I’ll be ready for it.”

“I let the early rounds get away from me. Otto is a good boxer and did a good job of sticking and moving the whole fight. I did a little bit too much head-hunting at the start and paid for it on the back-end.

“I don’t think the eye bothered me much and I’ve had it busted up before. Otto did a good job of throwing the overhand right and making the eye look the way it does. He just did a better job of paying dividends on the body. I maybe landed 10 body shots the entire fight, which is unheard of for me.”