Jovanie Santiago is ready to shock Adrien Broner and the world 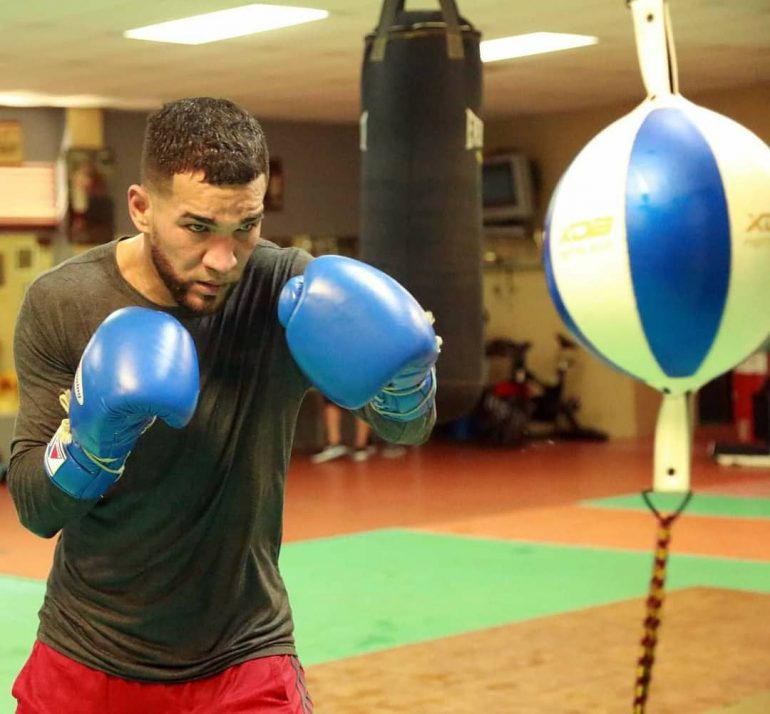 Jovanie Santiago is looking to shock Adrien Broner and the world (Photo by Esdel Palermo).
16
Feb
by Anson Wainwright

Jovanie Santiago does not mind being obscure. All he knows is that he will be receiving the chance of a lifetime when he looks to derail Adrien Broner’s comeback in a 12-round junior welterweight contest on Showtime Championship Boxing (9:00 p.m. ET/6:00 p.m. PT) from the Mohegan Sun Casino, in Uncasville, Connecticut, on Saturday.

Santiago, who has stepped in at late notice to face the underachieving American, welcomes the magnitude of the situation.

“It’s a great opportunity that they are giving me to face a four-division world champion,” Santiago told The Ring through Fernando Gaztambide. “It is a great challenge for my career and the world will know me when I beat him.

“The pressure is on Broner. A win will change everything for me and my family. I’m ready for war.”

The 31-year-old, who is a gardener and also drives a tow-truck in his native Puerto Rico between fights, is confident he’ll upset Broner.

“The whole world will know me when I take the victory to Puerto Rico,” said Santiago, who has close to 100 amateur fights. “The other thing I can say is that they should follow Puerto Rican boxing, because great fighters come from there in the blink of an eye.”

Santiago (14-0-1, 10 knockouts) has been training under the stewardship of Raúl “Papo” Torres and Freddy Trinidad and finds himself unusually relaxed for the biggest fight of his life.

“We are both in this sport working hard every day,” he said. “(Broner) is a good fighter, (but) I don’t see anything special about him.

“We are just two gladiators in the ring looking for great things in our lives. At the end of the day, I expect that both of us can continue in this great sport.”

Santiago’s promoter, Juan Ivan Orengo, of Fresh Productions Boxing, expects his fighter to give Broner all sorts of trouble.

“‘Lobito’ is No. 14 ranked in the world [by the WBA] and is undefeated,” said Orengo. “Showtime knows that Puerto Rican fighters are coming to fight. They were looking for a rival and we said, ‘Yes,’ from the beginning. ‘Lobito’ Santiago will be the perfect rival to defeat and retire Broner.”

Broner turned professional in 2008. He was able to break out and win world title titles at 130, 135, 147 before dropping back to 140 pounds to capture another belt. The Cincinnati, Ohio, resident holds wins over Antonio DeMarco (TKO 8) and Paulie Malignaggi (SD 12).

Now 31, the once promising fighter, however, has seen his form become patchy in the past several years and he has been embroiled in several legal issues. Broner (33-4-1, 24 KOs) is winless since he beat Adrian Granados in February 2017. Since then, he’s gone 0-2-1, although Broner has remained a TV draw. This would appear to be the last chance saloon for the polarizing figure.