Mauricio Lara shocks Josh Warrington, stops him in 9 rounds in Upset of the Year candidate 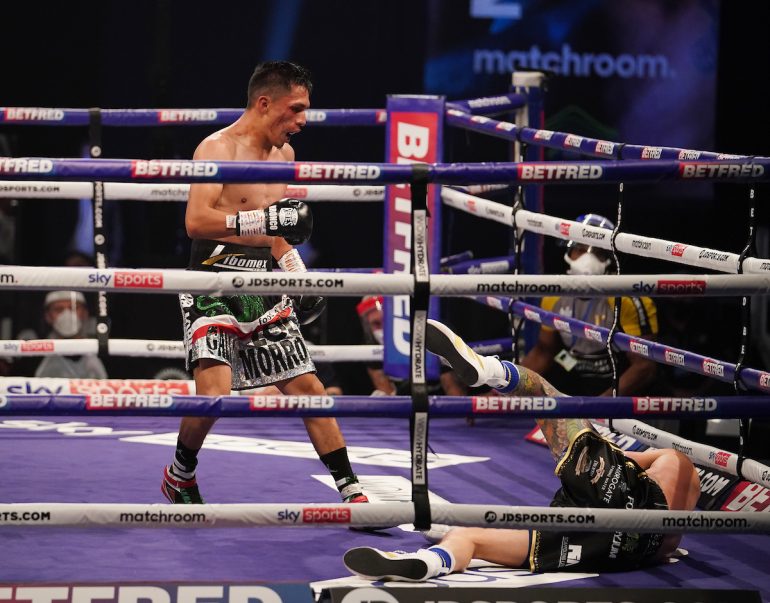 Josh Warrington gets knocked down by Mauricio Lara. Picture By Dave Thompson
13
Feb
by Tris Dixon

Josh Warrington lost for the first time in 31 fights as Mexico’s Mauricio Lara posted the front-runner for the Upset of 2021.

He stunned onlookers inside Wembley Arena, dropping and nearly stopping The Ring’s no. 1 featherweight before finishing it in round 9.

“It’s been a great night,” said a jubilant Lara. “I’m really happy for my family and the people back in Mexico. We worked really hard and it went as we planned.”

“We knew he could fight but we didn’t think he’d beat the no. 1 featherweight in the world and he did,” said promoter Eddie Hearn. “How Josh got through that fourth round I will never know but for the remainder of the fight he was on empty. That was a brutal, brutal, brutal fight.”

Mexican Mauricio Lara, who looked heavy-handed but stiff-legged at the start, soon warmed into the fight.

Warrington likes a tear up and he was happy to engage Lara when he might have been better served keeping it simple and trying to outbox him.

The Leeds man, so familiar fighting in front of huge, raucous crowds but boxing ‘behind closed doors’ for the first time hadn’t fought for almost 18 months having been a logistical victim of the pandemic and a logistical victim of boxing politics that saw him hand back his IBF belt as he waited for a bout with Can Xu. Conversely, Lara had boxed five times in that same period.

Warrington let his hands go a little more in Round Two, but the ungainly Mexican was throwing a variety of punches from some pretty unusual angles. His left hook was a jerky movement, his right uppercut looked cumbersome but as far as Warrington was concerned it was frustratingly effective.

Warrington, however, unravelled dramatically in the fourth and was fortunate to survive the round.

He was wobbled midway through the session and down from a left hook. He made it back to his feet but was in a terribly groggy state and had been in real danger. Lara tried to turn the screws and referee Howard Foster was on the brink of stopping it but decided to let it go.

Many will point to Foster’s stoppage of George Groves against Carl Froch as being trigger happy by comparison to what he allowed Warrington to endure in the fourth. Warrington struggled to make it back to his corner at the bell.

The Leeds man deserved immense credit for battling back through the fifth round, digging in and rattling home some left hooks and trading on more even terms than he had in the fourth.

Lara wasn’t finding Warrington hard to hit in the sixth and he landed well to the Englishman’s body, too.

The Mexican’s left eye was swelling, Warrington indicated to his corner that he’d damaged a shoulder. A marking time contest had become a brutal, aging fight.

They battled through the trenches in round eight, Lara often having the last word in the exchanges, but Warrington landed a double left hook and then one on its own before the round closed.

But in round nine, Warrington’s world came crashing down around him. A right hand went straight to Josh’s already heavy legs and then Warrington couldn’t get out of the way of the Mexican’s left hook and one final, booming left put the Leeds warrior flat on his back where referee Howard Foster waved it off.

Lara stops Warrington and gets the upset victory! 🥊 pic.twitter.com/16CG8KrYiS

He was placed on a stool in the center of the ring as he attempted to regain his senses and was given oxygen and then groggily made it back to his corner.

Lara, to his credit, celebrated only quietly until he could see Warrington was okay but Josh, so courageous in fighting back, was clearly distraught. He didn’t do an interview with the broadcaster and was on his way to hospital for thorough exams and scans (doctors said he was okay after checking him out but he was going as a precaution) while the Mexican could bask in the glory of his unlikely win, which might well already be the biggest upset we see this year.