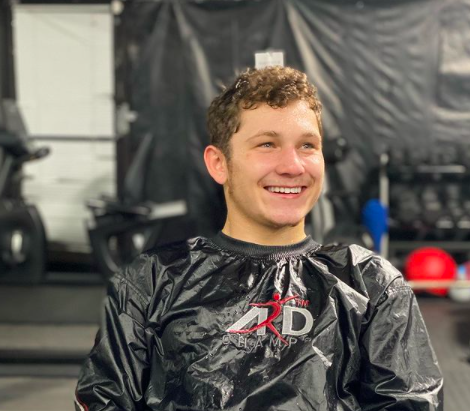 The pic on BoxRec makes it look like Victor Morales Jr is maybe fudging his age, in order to get a license to fight as a pro.

But no, he’s of age, he assures me in a phoner days before his Saturday fight, on the Golden Boy Promotions undercard for a Jo Jo Diaz main event.

The feature bout will screen on DAZN, but you can watch Victor Morales Jr, who trains in Portland, Oregon, and also LA, on Facebook Watch. Here is the link.

The young man, signed to Sheer Sports Managament, is smooth and articulate, communicates exceedingly well, and it makes more sense when he tells me that he’s friends with Shawn Porter, and Porter gives him tips on fighting matters and in how to deal with media.

In a bit, he will be dealing with 26-9-2 Mexican Rodrigo Guerrero, a 33 year old vet who has lost three straight.

Victor Morales Jr has been doing this a long spell himself, he followed dad Victor Sr to the gym at age 7, and in a year, he was doing fights. So this is a family affair…”My mom was a bit nervous in the beginning, I remember her being nervous for my first amateur bouts, but she ended up becoming a boxing official. My dad is chief of officials for USA Boxing,” he said, and mom Tabitha is basically secretary and also a judge.

Learn even more about Victor Morales Jr from this RING story.

For the record, he first met Porter, the welterweight boss who is lauded a a throwback athlete who fears no man and turns down no challenge, in 2010. “It was at Wild Card 2010, he was there training, I was there, we met them, and we hit it off as friends. It’s been 11 years, and I got to see him grow. He’s a role model, I talk to him once or twice a month. He’s awesome.”

Junior didn’t fight in 2020, because there weren’t many cards. He has kept COVID free, and he masks up, stays smart, he relayed.

He didn’t go stir crazy, he told me, because the time off gave him time to fully heal a left hand injury. “I went to physical therapy, and so I’ve also been getting stronger mentally and physically. I have stayed in the gym, keeping my craft sharp.” 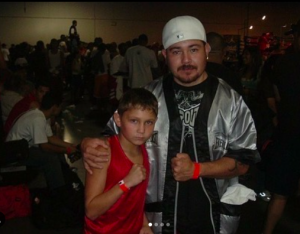 The featherweight Victor Morales Jr sounds like a vet when he speaks of Guerrero. “He got a title, so he knows what it takes to be at the top.” Guerrero got title cracks at super fly, versus Vic Darchinyan and then Raul Martinez, in 2010, and lost both, going the distance in each test. In October 2011, he downed Raul Martinez, via TD, and won the vacant IBF super fly strap. Of late, he’s dropped faceoffs against Jesus Galicia, Joet Gonzalez and 5-1-2 Alejandro Jair Gonzalez, on Oct. 5, 2019. He’s been out of the ring since.

“He’s going to try and test me… and he shall fail,” Victor Morales Jr told me. “I’m going to go in there and prove I’m a young gun.”

His style? “I’m a boxer-puncher, I like to box but I can punch, I can fight on the inside if I need to.” Nope, he said, he won’t be thrown off by meeting a lefty. “But I’m not going to underestimate him at all, he could come back with a different hunger, take over the division again, who knows? That’s what I’m expecting.”

Yeah, he may be a baby face, but this kid Victor Morales Jr thinks like a savvy pro. He sounds like a Sr.