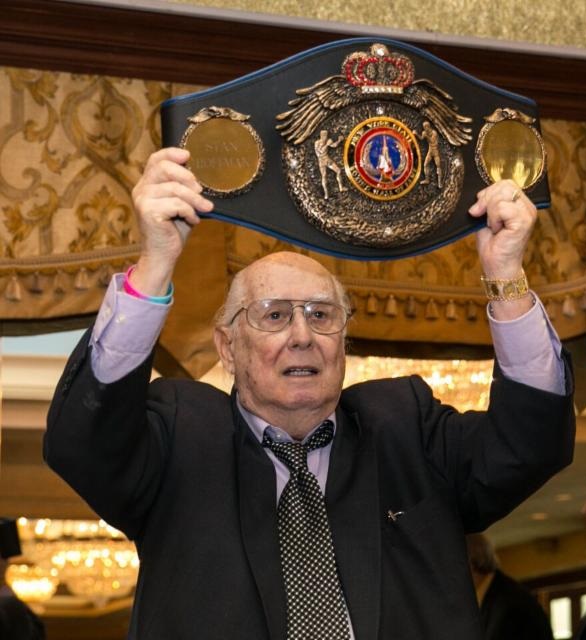 The news was confirmed to The Ring by matchmaker Ron Katz, who had known Hoffman for over four decades.

Though Katz had known Hoffman had been in ill health for a long time, the news was still hard to process.

“It leaves a hole, not only in my heart but so many who knew and loved him,” said Katz of the man known as “Bubbala” to his friends. “There really wasn’t too many guys that came across Stan that didn’t love the guy. Because, whether it be boxer or otherwise, he would more or less take them into his home. And that’s just how he was.”

Hoffman had a knack for having the right fighter at the right time. His biggest win as a manager came in 2001, when a promising but underachieving heavyweight named Hasim Rahman got the offer to fight heavyweight champion Lennox Lewis in South Africa. Rahman had been knocked out by Oleg Maskaev in the first fight after Hoffman had signed him, and his then-promoter Cedric Kushner declined to re-sign him.

Remembering how Hoffman stuck by him, Rahman told the Baltimore Sun in 2001 that he “felt like he really let this man down,” when he lost to Maskaev two years earlier, but was surprised that Hoffman drove to his home two days after with a birthday gift. “It was a watch. A nice watch. To me, that meant so much.

“I felt a person I was with, with or without boxing, had a genuine love for me. Knowing that a member of my team was 100 percent about me, that gave me much more inspiration.”

With blood streaming down his face, Rahman, a 20-1 underdog, landed one massive right hand that put Lewis down for the count in one of the biggest upsets in heavyweight boxing history. Lewis won the rematch later that year in sensational fashion, but not before Rahman and his team cashed in.

Remembering how Hoffman stuck by him, Rahman told the Baltimore Sun in 2001 that he “felt like he really let this man down,” when he lost to Maskaev, but was surprised that Hoffman drove to his home two days later with a birthday gift. “It was a watch. A nice watch. To me, that meant so much.”

Hoffman also worked with Iran Barkley when “The Blade” pulled off a pair of upset wins in 1988 and 1992, to win the WBC middleweight and WBA light heavyweight championships. He also managed Michael Bentt when, in 1993, he shocked the boxing world by knocking out Tommy Morrison in one round to win the WBO heavyweight title, and derail a Lewis-Morrison bout. He also managed James Toney for a number of years.

Hoffman found success early and often in boxing, having worked with 38 world champions as a manager, promoter or adviser, despite never having finished high school.

His first world champion was Joe Manley, who knocked out Gary Hinton in ten rounds to win the IBF junior welterweight title, and he also led Rogelio Tuur to the WBO junior lightweight title in 1994, and helped a skillful woman named Lucia Rijker get fights on television at a time when that was almost unheard of.

Hoffman, who grew up in Brooklyn and The Bronx, had fought in the New York Golden Gloves as a featherweight in 1949, according to a 1989 New York Times article.

The same article tells the story of how Hoffman, who had worked in the music industry for decades, was approached in the early 1980’s by someone hoping to get him to sign a musical group he represented. Hoffman told the man that the demo was “the worst piece of garbage I’ve ever heard. No offense intended.”

Hoffman didn’t sign the act, but the man made him an offer to invest in a heavyweight boxer named James Broad. Intrigued, Hoffman ended up buying a 20 percent interest in his career.

Boxing eventually took over so much of his life that he sold his interest in the record company to work full-time as a boxing manager.

Rodriguez credited Hoffman with taking over his career ten fights in and guiding him to a welterweight title opportunity. But he says the bond went beyond the boxing ring.

“Once he signed a fighter, they were like family to him,” said Rodriguez. “When I was in camp, he was on top of everything, always asking me if I needed anything. When you’re getting ready for a fight and you see the manager pays so much attention, it gives you that confidence.”

Hoffman was inducted into the New York State Boxing Hall of Fame in 2017.