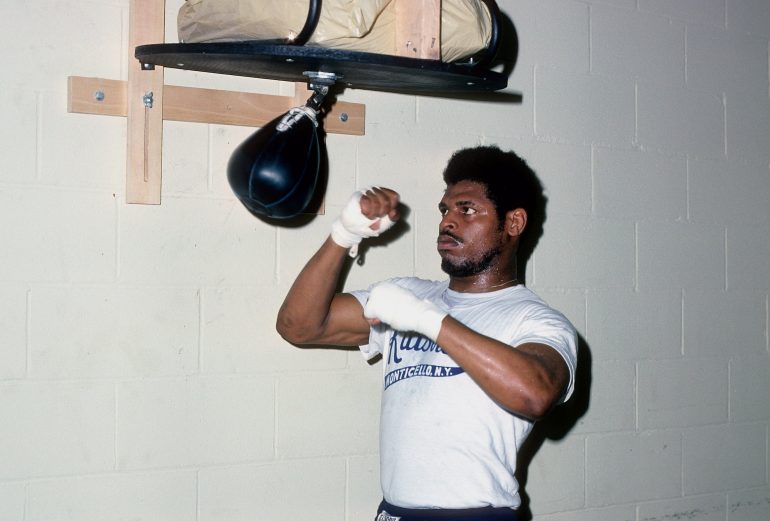 Spinks in training for the first Ali bout. Photo by THE RING Archive
06
Feb
by Ryan Songalia

Leon Spinks, the former heavyweight champion known for his sans-front-teeth grin, died Friday at age 67. A press statement cited a five-year battle with multiple cancers as the cause of death.

“His final fight was fought with the same skill, grace and grit that had carried him through so many lifetime challenges,” read the statement. 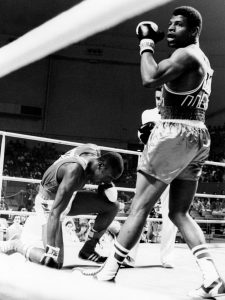 Leon Spinks nears the the end of his road to gold at the 1976 Summer Games. Photo: AFP via Getty Images

Spinks, a native of St. Louis, Missouri, began boxing in the U.S. Marines before bursting on to the world stage in 1976, winning the light heavyweight gold as part of perhaps the greatest Olympic boxing team in U.S. history, which featured five gold medalists, including his younger brother Michael Spinks and Sugar Ray Leonard.

As significant an achievement as that was, what he accomplished a year after his pro debut overshadowed even that.

“Neon Leon” was off to an inauspicious start to his pro career at 6-0-1, having drawn with Scott LeDoux before he was picked to face an aging Muhammad Ali in February of 1978. A 10-1 underdog, Spinks pulled off the upset win by split decision to win the heavyweight championship.

Spinks’ rise to stardom peaked that night. He was stripped of the WBC belt for failing to face mandatory challenger Ken Norton, and lost the lineal championship in his first defense, dropping a unanimous decision in a rematch against Ali in September of 1978.

Spinks never regained the championship, and lost his next match the following year, being dropped three times by Gerrie Coetzee in a first round knockout defeat. He’d get two more chances at a world championship but fell short both times, losing by third-round stoppage to Larry Holmes for the heavyweight championship in 1981, and by sixth-round stoppage to Dwight Muhammad Qawi in 1986 for the WBA cruiserweight title.

Spinks’ legacy in the sport continued to live on through his son, Cory Spinks, who won the undisputed welterweight championship in 2003 before adding the IBF junior middleweight title in 2006 to become a two-division champion.

Read Muhammad Ali-Leon Spinks: The only time Ali lost his title in the ring