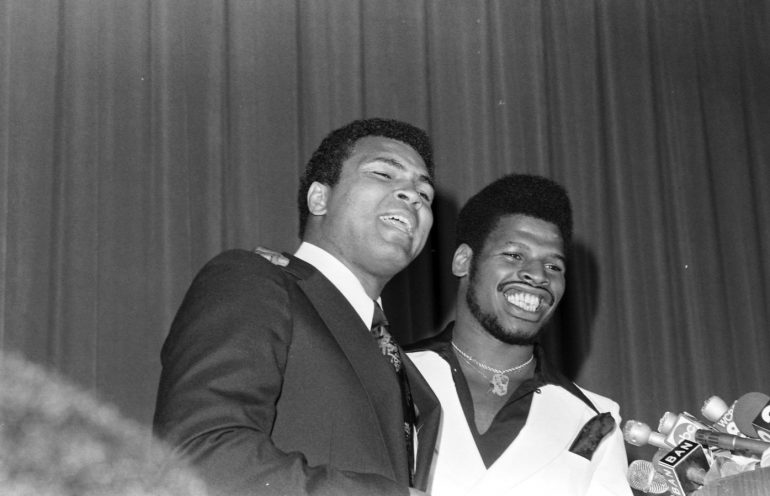 Leon Spinks and Muhammad Ali at a press conference announcing their rematch. Photo by THE RING
06
Feb
by Thomas Hauser

Leon Spinks enjoyed two moments of adulation and glory in his tumultuous life. In 1976, he won a gold medal in the light heavyweight division at the Montreal Olympics. Two years later, he upset a long-past-his-prime Muhammad Ali to claim the heavyweight championship of the world.

Things went south from there. Plagued by lifestyle issues, mocked by the media and fans alike, Spinks was defeated in his rematch against Ali, lost 17 pro fights, and was knocked out nine times. Some of the knockouts were inflicted by world-class opponents like Larry Holmes and Dwight Muhammad Qawi. Others were suffered at the hands of fighters like Rocky Sekorski and Angelo Musone. 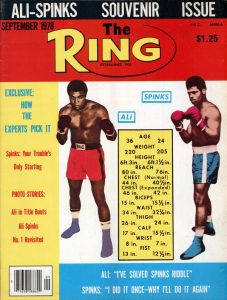 John Schulian put matters in perspective after Leon’s 1978 upset of Ali. Addressing the chorus of disapproval regarding Leon’s antics, Schulian wrote, “You might as well get used to the fact that Leon Spinks is Leon Spinks.”

Leon died on Friday night. The immediate cause was complications from prostate cancer that had spread throughout his body. But physically and cognitively, he had been in decline for years. He was 67 years old.

I interviewed Spinks for the first time in 1989 when I was conducting research for Muhammad Ali: His Life and Times. Leon was working in a bar, doing odds-and-ends chores, and drinking more than he should.

“Sometimes what I think about is how my life changed, being champion,” Leon told me. “It wasn’t right, the way people treated me. I was fighting to get ahead. All I wanted was to make a living, and the world wanted me to be like Ali. I couldn’t do what I used to do because everything I did got blown out of proportion. I couldn’t be like I wanted to be. Not getting respect didn’t matter to me. I don’t mind people making fun of me. People always make fun of me. If they don’t do it to my face, they’re gonna do it behind me. But when I was champion, no one would leave me alone. That’s what really bothered me. Everyone wanted me to give them something or do something or act a certain way. And I couldn’t do it. I’m Leon Spinks; I’m not Ali. And then, when I lost, people still didn’t leave me alone. Even now, they don’t let me be.”

Then I asked Spinks about Ali’s physical condition and whether he felt sorry for Ali.

“What for should I feel sorry for Ali?” Leon answered. “Don’t you hear what I been saying? The man’s still living. The man’s still eating. He’s making money. There’s a roof over his head. And best of all, whatever happens, he’ll always be Muhammad Ali.”

Thomas Hauser’s email address is [email protected] His most recent book – Staredown: Another Year Inside Boxing  – was published by the University of Arkansas Press. In 2004, the Boxing Writers Association of America honored Hauser with the Nat Fleischer Award for career excellence in boxing journalism. In 2019, he was selected for induction into the International Boxing Hall of Fame.