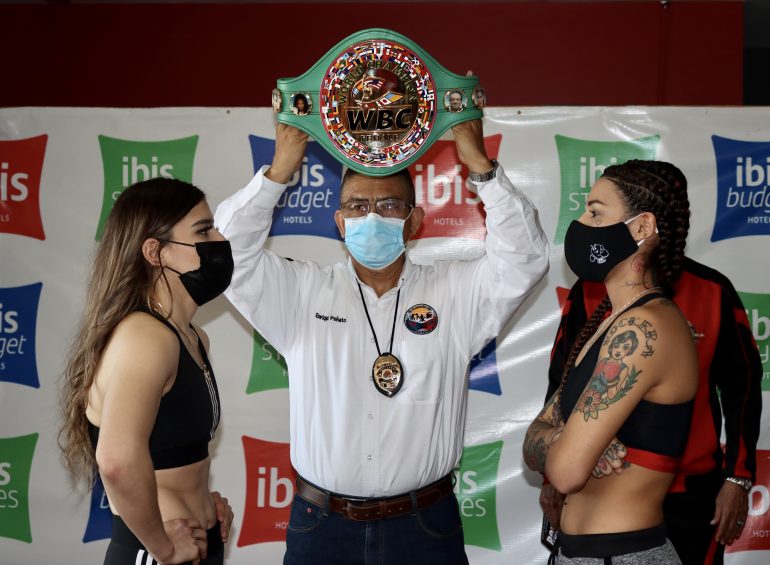 Both Yamileth Mercado and Julissa Guzman made weight for Saturday night’s world title fight at the Jardines del Pedregal in Hermosillo, Mexico. At stake will be Mercado’s WBC female junior featherweight title.

Mercado (16-2, 5 knockouts), who resides in Ciudad Cuauhtemoc, Mexico, won the WBC title in November 2019, defeating Fatuma Zarika by unanimous decision. The fight was a rematch of their September 2018 clash, which Zarika won by split decision in her hometown of Nairobi, Kenya.

In her last bout, a non-title fight in September 25, the 22-year-old stopped Irasema Rayas in four rounds. She has won her last four bouts since the Zarika setback.

Mercado anticipates a war against Guzman but believes she has the intangibles to come out victorious.

“I prepared very well mentally in Los Mochis (Mexico), working alongside (WBC titleholders) Miguel Berchelt and Juan Francisco Estrada,” said Mercado, who turned pro at the age of 16. “I believe I did double the preparation. I assumed a different mindset in preparing for this fight. I’m challenging myself that I can do this (defend my title) and much more. I want to defend my world title and be a durable champion.”

The 24-year-old, who resides in Ciudad Obregon, Mexico, believes her time sparring the likes of Estrada several months ago will be a huge advantage against Mercado. She is confident that she will be victorious Saturday night.

“My preparation was to the max,” said Guzman, who has not lost since her pro debut in July 2015. “(It was) very grueling. In the end, it will only be Yamileth and myself in the ring. She is a strong champion. I am a fighter that comes forward. I believe it will be a great fight, but I will fulfill my dream of being a world champion.

Guzman recently trained alongside Jackie Nava, who is ranked No. 2 by The Ring at 122 pounds, in Tijuana and reportedly received words of guidance in person from former world champion Julio Cesar Chavez.

In the co-feature, Oscar Nery Plata (13-2-1, 7 KOs) of Mexico City will square off against Tijuana’s Wilibaldo Garcia (11-4-1, 6 KOs) in an eight-round bantamweight bout.

The card, which will take place with no audience in attendance, will be promoted by Zanfer Promotions.