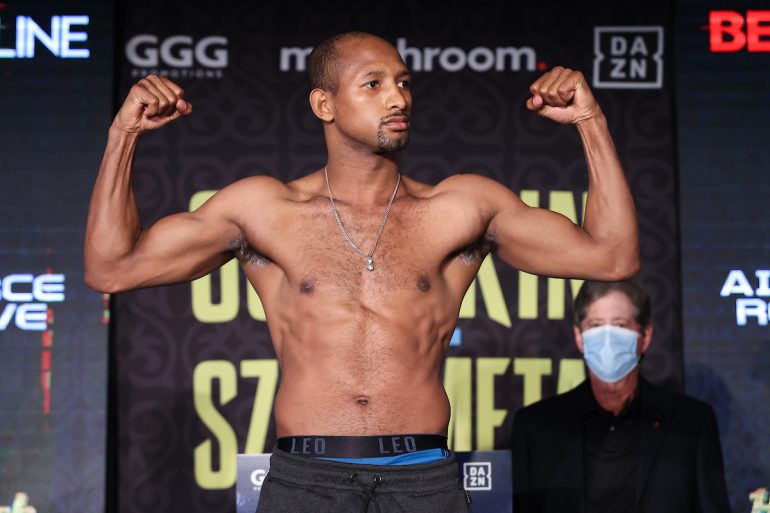 The news comes exactly one month after Gongora pulled off the upset knockout victory over highly touted prospect Ali Akhmedov of Kazakhstan in Hollywood, Florida. Gongora (19-0, 14 knockouts), who resides in Boston, Massachusetts, was an 8-1 underdog going into the fight and received a hero’s welcome after returning to his hometown of Esmeraldas, Ecuador.

“I want to thank Eddie Hearn and Matchroom for giving me the opportunity to shine,” said the southpaw Gongora. “I proved to the world I have what it takes to be a champion with only two weeks of training.”

Promoter Eddie Hearn believes Gongora’s southpaw, boxer-puncher style could give problems to anyone in the super middleweight division, including the world titleholders.

“I am delighted to add Carlos to the Matchroom team,” said Hearn. “His win over Akhmedov in an all-action fight was one of the most dramatic I’ve seen, and I believe the division stood up and took notice of Carlos’ name that night. His team says that Carlos will take on anyone, and I believe that we can make some huge fights for Carlos to chase his dream of holding all the belts.”

“I would like to thank Eddie Hearn and Matchroom for giving me the opportunity to showcase the skills of Carlos,” said Criscio. “I’ve been after Eddie for about five years to sign two of my Olympians, and when he called for the opportunity and short notice of two weeks to fight a killer (in Akhmedov), I did not hesitate to say yes.

“I know what I have in my guys and I know what they can bring to a promoter. I hope this will mean bigger and better things for both of us and an opportunity to showcase more of my talented fighters.”

Gongora turned pro in May 2015 and has mostly fought on club shows in the Northeast. Prior to the win over Akhmedov, Gongora owned modest victories over gatekeepers Derrick Findley and Damien Bonelli, and in his previous fight on January 31, defeated journeyman Elie Augustama by unanimous decision.

With Canelo Alvarez now fighting at 168 pounds, and potential opponents such as Billy Joe Saunders and Caleb Plant being mentioned for 2021, Gongora will have to wait for his opportunity. But Gongora remains steadfast that he will fight for a world title belt in the next few years.

“I will not stop until I have all the belts,” said Gongora. “I want to fight the best and only the best. I want to support my family and give them a great life, one they never had before. One that I want to give them. I fight for my family and my country.”