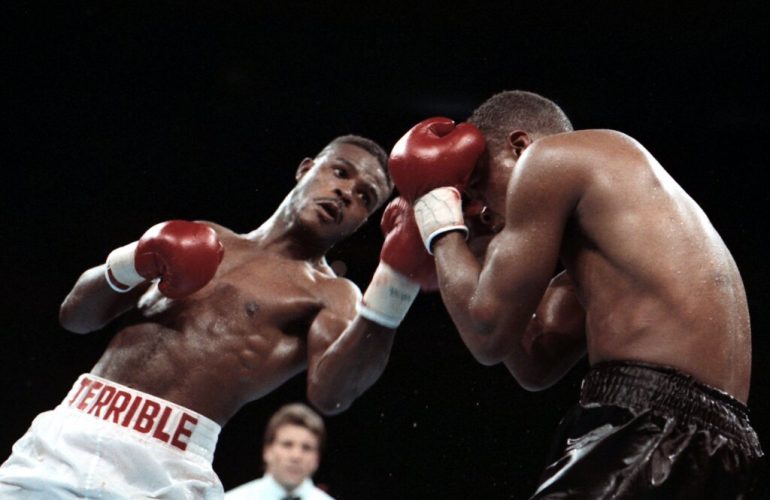 Norris (left) was too young and fresh for an aging Sugar Ray Leonard. Photo from The Ring archive
14
Jan
by Anson Wainwright

Editor’s Note: This feature originally appeared in the December 2013 issue of The Ring Magazine.

Terry Norris was one of the most exciting fighters of his era for a simple reason: He was an excellent, aggressive boxer with good power but a weak chin, meaning chances were someone – either he or his opponent – was going to get hurt.

And generally it was the opponent who ended up suffering.

His most notable losses were against Julian Jackson (TKO 2) and Simon Brown (KO 4). Norris defeated Brown by a one-sided decision in their rematch.

Norris (47-9, 31 knockouts) also was involved in one of the strangest trilogies in boxing history, twice being disqualified for illegal punches against Luis Santana only to win their third meeting by KO.

He was inducted into the International Boxing Hall of Fame in 2005. 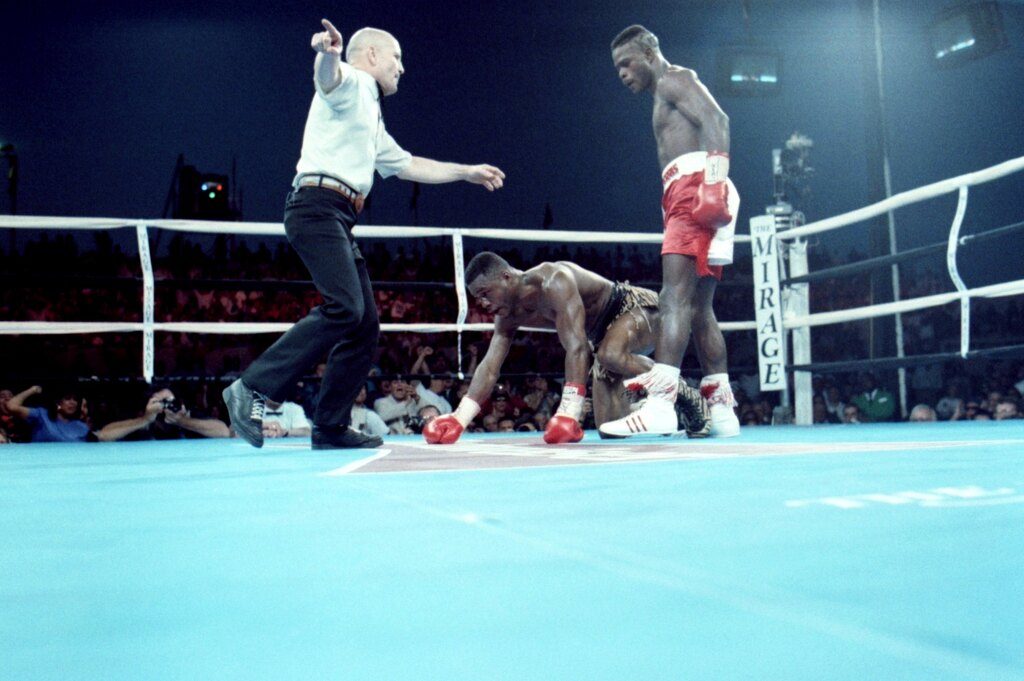 Now 46, Norris has had problems with pugilistic dementia and Parkinson’s but, with the help of wife Tanya, he’s doing well. They started a foundation to help fighters in a similar position. They also lead their own workout program, called World Champion Cardio, at a gym in Hollywood, California.

Norris graciously agreed to speak to The Ring about the best he faced in 10 key categories.

BEST JAB
Maurice Blocker: He was about 6-foot-2 and had a nice, long, straight jab. … He kept me (on the outside) but eventually he made a mistake, and I caught him with a devastating left hook. I almost knocked his head off.

BEST DEFENSE
Simon Brown: In my first fight with Simon Brown, he was very hard to hit. I made a lot of mistakes in that fight. He dropped me and eventually knocked me out. We had a rematch, I came back. I dominated for 12 rounds.

BEST FOOTWORK
Leonard and Meldrick Taylor: That would be Ray or Meldrick. Ray was very light on his feet. I was faster and stronger, but he stayed there, real crafty. Meldrick Taylor had good foot speed.

SMARTEST
Brown: I can’t say Ray Leonard. … I’d say the smartest guy I fought was Simon Brown. He played me the first fight. The first couple of times the fight didn’t come off. Once he got the fight, I didn’t watch much tape. But he prepared well for the fight. He came out boxing. I thought he was a straight-forward brawler. He caught me on the back of the head and knocked me out, and the rest is history. Donald Curry was very smart in the way he threw punches. Everything was right down the pipe, nice and smooth, so it was hard to see. But he made a mistake the way he dropped his hands, and I had good power and speed, so I hurt him.

STRONGEST
Julian Jackson: Julian by far, and Simon Brown. When we get into clinches, some guys you walk or push back. I pushed Simon and he stood still. Julian Jackson was a powerful man when he hit me. He moved me. I knew he had power, so I tried to stay away from it, and he just nailed me. I saw the tape.

BEST CHIN
Troy Waters: I hit that guy with everything. I nailed him with big right hands, body shots, and eventually I beat him down so bad. They had to stop the fight, he wouldn‘t quit. [Norris stopped Waters in the third round.] Jorge Castro was tough, too, but I hit him with more speed and combinations than power punches.

BEST PUNCHER
Jackson: He nailed me. He had one-punch power, he knocked me out. I got a little cocky. I won the first round easy. I thought I could walk right through him, but he proved different. I didn’t see it. There was never a rematch with him. I wanted one. We had the same promoter, Don King, and it was hard to make.

BEST BOXING SKILLS
Leonard: It would definitely have to be Ray Leonard. He was the best I faced.

BEST OVERALL
Leonard: The best boxer I would say was Ray Leonard. He was a smart man inside the ring. I hurt him several times and he made it look like he wasn’t hurt. He was smart the way he moved, the way he boxed.