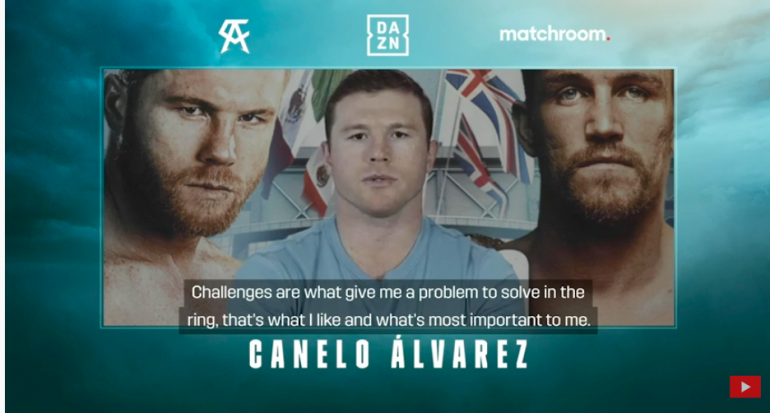 It’s been, how should we put this, an interesting time span for Canelo Alvarez since he last gloved up, on Nov. 2, 2019, against Sergey Kovalev.

You hardcores know more than a bit about some of the drama that has played out, outside the ring, and how that all contributed to the red-head being sidelined from live-fight action for so long a spell.

The outside goings-on are now, it seems, pushed aside, and the Mexican middleweight-super middleweight-light heavyweight will be back on a big stage when he faces off with Brit Callum Smith (WBA titlist, RING belt-holder; 27-0; click here for his BoxRec), in San Antonio, Texas, and on DAZN, Dec. 19.

Eddie Hearn has been the main selector to fill the DAZN pantry since the streaming service went all in presenting pugilism in order to attract subscribers to their service, in 2018. The Englishman presided over a press conference today, Saturday, to get folks hyped for the ring return of the 53-1-2 Canelo (click here for his BoxRec.)

Zero surprise, Hearn seemed enthused, calling this Canelo card “a massive event.” Right away, from London, he handed off the mic to DAZN VP Joe Markowski, who was also enthused. “Let me blunt, this is an incredible fight, the pound for pound king, against the number one super middleweight in the world,” said Markowski, matching Hearn for optimism, or, perhaps, hyperbole, if you were watching from a certain seat.

DAZN is about to launch in a boat-load of new nations/territories, and it can be argued that it would have been a bit easier to do so if the last two main events which were presented to DAZN subscribers hadn’t been underwhelming. On Friday, Billy Joe Saunders got put in with Martin Murray, and the nasty boy BJ had his way with Murray, who had failed the previous four times he angled for a world title. Now 38, Murray (39-6-1) said after Saunders (30-0) won most every minute of every round against him that yes, he’d be considering retirement. This was a stay busy, get to the next one fight for Saunders, who defended a WBO super middleweight belt.

Fans want and need to see the best in class fighting each other, not taking part in stay busy bouts. Callum has the RING belt, and Canelo is rated No. 4 by the mag crew.

The previous week, Hearn had put together another “get to the next one” main event, this one featuring Danny Jacobs, now campaigning as a super middleweight. Ring’s No. 10 at 168 got matched with Gabe Rosado, a “name” to hardcore fans, who entered the ring in Florida sporting a 25-12-1 record. That fight got hammered nastily on social media, and it could be argued that neither man deserved to win. (To his credit, Hearn publicly critiqued the boring face-off after it mercifully ended.) But Jacobs came away with a split decision win. Afterwards, he apologized to viewers, telling them he’d do better next time, in a fight against a bigger name opponent. RING termed the battle “dismal.”

Yes, the momentum for the platform, coming to this press conference, wasn’t of the positive variety.

However, one doesn’t want to stay stuck in a quagmire, not if you are DAZN’s executives, who want to prove to their chief, Len Blavatnik, that boxing has been a savvy investment as they attempt to build their base. And not if you are combat sports media, because there is never a shortage of negativity to focus on, and one can get bogged down under that cloud cover if you aren’t aware of the dynamic.

Canelo against Callum Smith, rated No. 1 by RING, should, in fact, be decent scrap. They are both 30, in or very near their athletic primes, that is a good thing. It’s solid, on paper, and my guess is it plays out the same way.

Smith’s trainer Joe Gallagher told watchers, who could tune in on several social media platforms, that his kid is properly jazzed to show the world what he’s made of.

Hearn then handed off to trainer Eddy Reynoso, in San Diego. In Spanish, he told watchers that they’ve been very careful, about COVID. “We have a limited team we’re working with,” he said.

Hearn took the role of questioner, and, yes, he does a more than decent job at that. Though, it must be said, having the promoter play the role of the press isn’t ideal if you are one who is concerned that too many lines have been blurred, and obliterated, as “legacy media” continues to sink and “new media,” much of it run by the talent themselves, on their personal channels, flourishes. 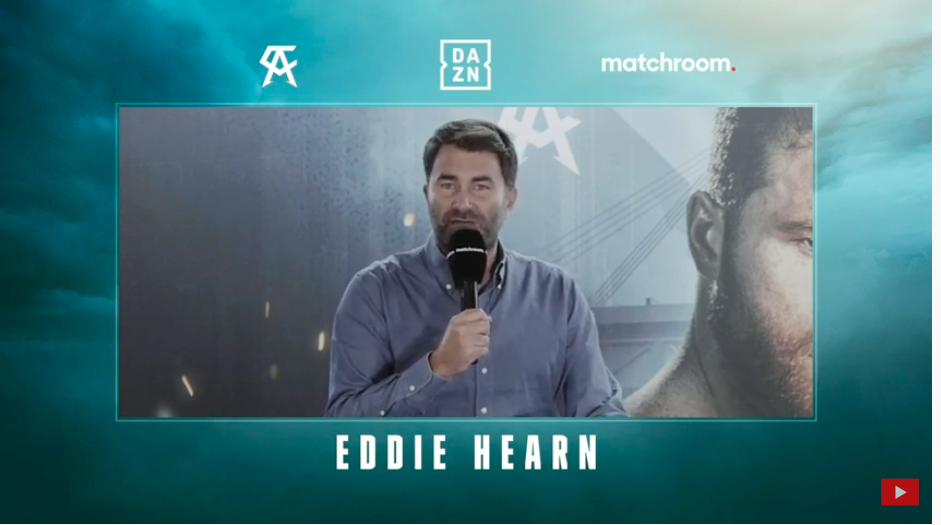 Note: Disclosure time, some of you might not know, but Oscar De La Hoya, and Golden Boy Promotions, owns this website, and The Ring magazine. Yes, lines are blurred! Canelo, rated No. by RING, and Golden Boy divorced, and so this Canelo v Smith fight is a new experience for Canelo, in that he’d been under the Golden Boy umbrella since 2008. During that time, he reached the place he is now, which is being seen by a percentage of fight fans as the top pound for pounder on this earth. But, in boxing, and in life, we all know, or should know, that relationships ebb and flow, and nothing is forever, but death and taxes.

Back to the presser….Smith actually sat down near Hearn, in London, properly distanced, though unmasked. “It’s a huge opportunity, but an opportunity I feel I deserve,” Smith said of this Canelo dance-off. Hearn implied he didn’t get up as high as he could against Hassan N’Dam and John Ryder, and Smith said yeah, the better the foe, the better he performs.

The Brit fighter lauded Canelo, stating that the Mexican hasn’t ducked anyone, and, “I definitely believe I will beat him.” You may know, Canelo had fought Callum’s older brother Liam Smith (in 2016), and so he will get a solid scouting report from Liam.

There was talk about the timing being a little strange, of Callum not getting as much notice as he’d have liked for this scrap, but he told Hearn he’s been training enough, so he will be able to be his best come Dec. 19.

And then Hearn pivoted to Canelo, who spoke from San Diego. Canelo spoke in Spanish, and watchers who don’t speak Spanish could read sub titles. He didn’t break news, or figuratively break any china. “I like challenges, they’re what motivate me,” he said. “In the end I want to make history in the sport….We’re ready to get past this next challenge.”

And what strengths and weaknesses does he see? Callum is tall, smart and so he thinks Callum is dangerous. “We’re ready to overcome this challenge,” he said, choosing not to share any intel on what holes he might exploit. “To me he’s the best at 168 pounds,” Alvarez said, so that’s what motivates him, to beat the best in this division.

There will be fans allowed into the Alamodome, and he’s happy with that. “That makes me very happy,” he said. And looking forward, he said he wants to unify at 168, so, it seems he will stay at super middleweight for a spell.

Hearn hurled a pitch to Callum; does he think he could maybe stop Canelo? Sure, he said, he doesn’t think Canelo is impervious to being stopped.

Hearn asked Canelo for a prediction, for his Dec. 19 tango, in front of 11,000 or so fans expected. “It’s going to be a great fight, without a doubt, because I have a very strong, very smart opponent in the ring. But obviously, I see myself winning and fighting a very intelligent fight, and obviously winning this next fight, God willing.” He ended by thanking all for putting this together and people for watching. “We’ll see you on Dec. 19.”

Before that, DAZN subscribers will get to see Anthony Joshua defend a crown against fellow heavyweight Kubrat Pulev (on Dec. 12). Hearn didn’t mention that one, but did leave on an up note, declaring that the sport as whole is finishing the year “on a high.”

We shall see. I think DAZN is trying to hit the re-set button, but whoever is making decisions will ideally be settling on more matches like Canelo vs Callum, rather than Jacobs vs Rosado.

On the grapevine, we hear that James Rushton, acting CEO, has a core team overseeing boxing day to day. That seems likely to play out beneficially to subscribers, I’m hoping, in the new year. John Skipper as chairman made those jumbo big plays happen to start out, and now we are in a phase where refining needs to happen, and I see some signs of that. OK, having Kamil Szeremeta as next for Gennady Golovkin doesn’t float boats, but we’ll be generous, and write that one off, as a “2020 thing.” Maybe we see GGG versus Jaime Munguia in April 2021? On paper, the Jan. 2 Ryan Garcia vs Luke Campbell DAZN offering feels like legit value for a subscriber, so here’s hoping we see more and more of that level of content being furnished. Burning up a budget on stay busy fights makes a fighter and a manager happy, but it doesn’t benefit the platform, the fans, or the sport as a whole. That dictum, for the record, applies to not just DAZN and company, it is directed at everyone with the power to lift the sport up, as a whole, or not.