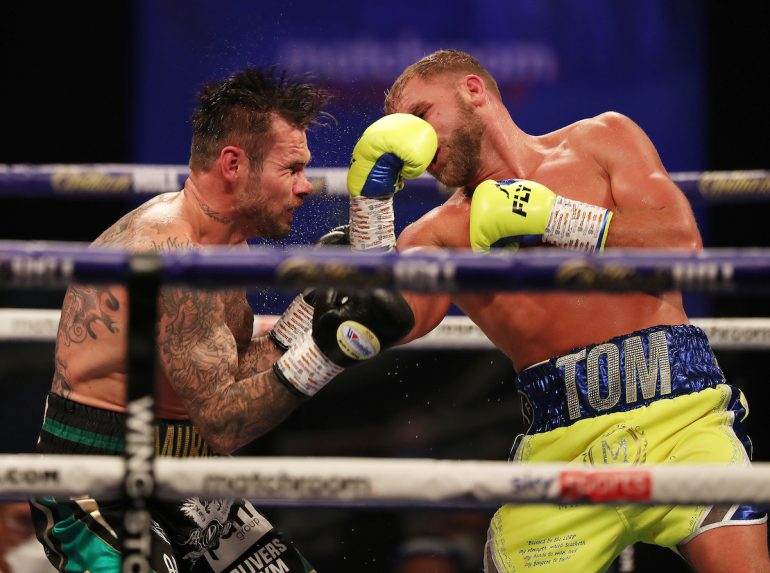 It’s wasn’t Canelo, but it was work.

The unbeaten Billy Joe Saunders put the disappointment of that ill-fated mega-fight behind him by retaining his WBO super middleweight title for the second time with a 12-round unanimous decision win over countryman Martin Murray at the Wembley Arena in London on Friday. The official scores were 120-109, 120-109 and 118-110.

Saunders, who is rated No. 5 by The Ring at 168 pounds, was far sharper than in his previous outing against Marcelo Coceres (KO 11) in Los Angeles last November. The super-slick southpaw was in excellent fighting shape and displayed the usual hallmarks: sharp punching, handspeed, angles and ring craft.

“I tried to set a rhythm, but he’s a cunning old fox,” said Saunders (30-0, 14 knockouts) in his post-right interview with Sky Sports. “I’ve been out a year, but I probably needed the rounds to be honest with you. He got through it and fair play to him. I hope he has a good Christmas.”

The pace was slow in the opening two sessions, but Saunders claimed ring center and pumped an effective southpaw jab into the face of the challenger. The first meaningful blows of the contest were a brace of sharp uppercuts, from both sides, in Round 3. Saunders isn’t known for his punching power, however, the damage will mount of he’s allowed to score flush.

The defending titleholder kept up the momentum in the fourth, stunning his man with a powerful one-two. Moments later a torrid burst led to the challenger sprawling to the canvas and that could have been scored a knockdown. Murray, 38, is always fit, and he’s known for his durability, but Saunders’ work was now being felt and not seen. More sharp attacks went unanswered in the fifth and Saunders was now having a field day

Murray, from St. Helens, was a world-class operator for several years and only came unstuck against the very best in his prime: Felix Sturm (controversial draw), Sergio Martinez (close), Gennadiy Golovkin, George Groves and Arthur Abraham. He was able to nail Saunders with the odd single shot but just couldn’t follow up with a second phase, and the savvy veteran was outscored and outsmarted in the majority of the sessions.

With their power hands on the same side, both fighter’s heads came together often and the pair shared words following some rough stuff on the inside. As had been the case throughout, however, Saunders continued to land the eye-catching punches in the championship rounds and cruised to a comfortable victory.

The 31-year old Saunders was to have faced Canelo Alvarez in May but that showdown fell apart due to the pandemic. Despite Murray’s quality and experience, this was viewed by many as a marking time bout for the crafty left hander because both men are at different stages of their careers.

“Golovkin, Canelo, Callum Smith, Demetrius Andrade, it must be one of them next,” said Matchroom promoter Eddie Hearn. “People talk about Billy Joe Saunders as potentially the best pound-for-pound fighter in Britain, but we can never call him that unless he’s mixing with that level of opposition.”

Murray, a terrific ambassador for the sport, drops to 39-6-1 (17 KOs) and hinted that he may retire for good.

Former world title challenger James Tennyson (28-3, 24 KOs) took part in a WBA lightweight eliminator and dutifully eliminated the previously unbeaten Josh O’Reilly in one round. Tennyson, who lost via fifth-round stoppage to then IBF 130-pound titleholder Tevin Farmer in October 2018, is a renowned puncher and flew out of the blocks fast. Canada’s O’Reilly (16-1, 6 KOs) bravely got up from three heavy knockdowns, but referee Marcus McDonnell wisely halted the action when Tennyson continued to tee off with solid power shots. The official time was 2:14.