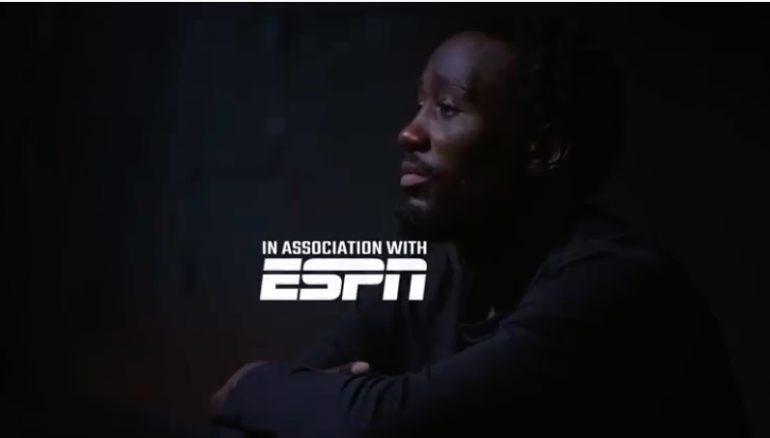 You may watch the Terence Crawford fight which will unfold on ESPN Saturday night, when he takes on Kell Brook, and you may well come away from that clash with the belief that Crawford is the best boxer in the world, pound for pound.

And you maybe won’t watch it, because you assume the 34-year-old Brook (39-2, stopped by Gennadiy Golovkin and Errol Spence) is very far past his prime, that it will be easy work for Crawford (age 33; 36-0) , and a win against the Brit won’t help prove to you if Bud is or is not the best boxer on the planet.

If you don’t watch it, I won’t wag a finger at you. This isn’t “the best fighting the best,” you have asked for Crawford versus Errol Spence for a few years, you thought that fight had a chance to be the 2010s version of Hagler vs. Hearns. But it didn’t happen, for some reasons or others, and it depends on who you ask.

But it didn’t happen, and, I think, until it gets conclusively proven one way or another, a degree of blame has to attach to every person and promotional entity involved for that not occurring.

So, back to what is happening…

Crawford will fight Brook in a fight which Top Rank bossman Bob Arum has told me is “a good fight.” If you picked up on the fact that Bob hasn’t seemed blown away by this match, you aren’t alone, and you aren’t wrong. Why exactly that is you will have to get deep into it with him. 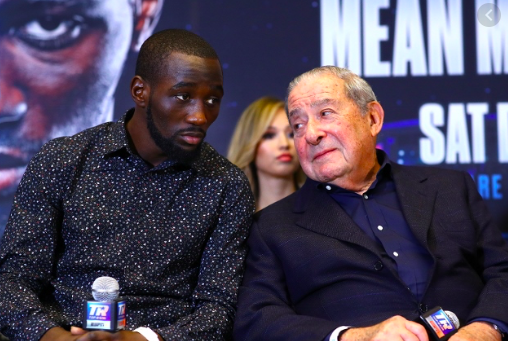 Crawford and Arum last year. Bud has a rich guarantee, supposedly more than $3.5 million a fight. He’s said that not getting the super fights doesn’t bother him…but a story featuring input from a lawyer he hired says otherwise. (Mikey Williams photo)

As for Crawford, he seems dialed in, as amped as he typically is. By “amped,” I mean he’s not over-the-top jazzed up. He’s not screaming for attention or doing WWE type promo hype hits to stir the pot. He’s pretty much been saying the same thing he’s been saying for the past few years. As he told Andre Ward during a chat which played on the ESPN promo show “Relentless,” he communicated that he believes he is No. 1 pound for pound, and has been that, no matter what anyone else has opined. Ward noted that many folks had Vasiliy Lomachenko as their pound for pound No. 1, and he took a hard L, courtesy of Teofimo Lopez. Bud, he feels, and Bud feels, is the clear No. 1.

Crawford gets points on that show for keeping it real when he told Ward that he can’t really talk about himself being an all-time all-star, because “I didn’t have those big names to share a ring with.”

But, he gets a point taken away for the portion where he explains to Ward what the biggest thing people get wrong about him. He said it’s that he gets pegged as arrogant and unapproachable, but when people do approach him, they find that he is a “cool, down to earth dude.”

That time I asked Bud for a couple minutes to ask some questions at the media session for the April 20, 2019 Amir Khan fight at Madison Square Garden…

I said right then, you know what, I’m too old to chase, the stakes aren’t big enough here. So more and more I’d just talk to his trainer, the congenial Brian Mcintryre, and that way I could do the job in covering the athlete for the fans who want to get reportage on him, but since he’s not inclined to give me anything, I won’t chase.

It’s funny, I was talking to a close friend about this dynamic on Thursday night, and he said, “Oh yeah, I felt sorry for you when they did that live Talkbox Q and A at Modell’s, that was painful,” he said.

Terence didn’t want to be there, not with me, anyway, and I think people present would have rather listened to a time share pitch. I knew it then, to a point, but resolved to keep on keepin’ on. (You can see me TRYING to see all the sides and be in acceptance mode in this Bad Left Hook column. ) After a few of those occasions, though, I figured that life is too short to chase, so I’m more inclined to just be honest about it, and share that with you all. It is what it is, the world will keep spinning regardless.

As a fighter, not as a personality, Crawford does gets points for mixing it up more, doing his thing in a “fan friendly” way when he met Egis Kavaliauskas last December.

Yes, there was an ebb and flow to the bout, more drama than we’re used to seeing in a Crawford bout. I wondered at the time why, but I set upon a reason pretty quick. We get older, our reflexes dim. Whereas we pulled back and made em miss five years ago, today we aren’t as quick. We don’t respond like we did and whereas before they missed by an inch, now they tag us. Happens to every single guy. It is what it is…and guess what, deterioration due to age often makes for better fights. Age can even playing fields. Glen Johnson wasn’t going to give Roy Jones that same business against Roy from five years before.

So, with the age thing in mind, we should probably consider the possibility that the Crawford vs Brook fight might be a better fight than some are assuming.

NOTE: As I was typing this piece up, I got a text from someone, asking me if I saw that Coppinger piece. No, I said. Read it, they told me. I did. Wow, the game changed, huh?

Or, at least an element of it did, what is being made public in the Top Rank/Terence Crawford relationship. 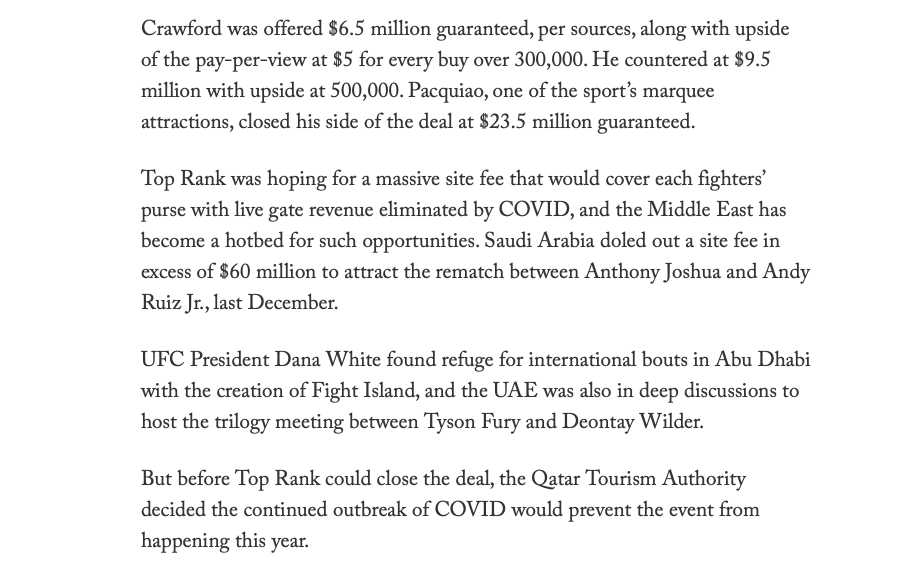 You can read more about the Top Rank-Crawford relationship on The Athletic.

So, now that info is in the public sphere, it makes what Crawford was telling Ward, about being misunderstood, stand out more. I saw Terence interact with someone who does work on his behalf last year, and it seemed harsh and bullying to me. I didn’t dig the vibe at all. But I understood at the time that different people have different types of ways of interacting with each other, what seems like bullying to me might seem like joking to other people. (At 6:09, below, it is FUN joshing. But some of what I’ve seen from Bud has not been at all jovial. At the time, and then time again, I dismissed it, mostly, because I have to understand pugilists are not all going to conform to a standard form of respectful demeanor, especially when around media, which is often perceived as an enemy)

But I got a bad vibe from it, and that contributed to a shift in how I cover him. I edged away more at the end of the year.

I’ve dealt with plenty of folks who you could tell didn’t want to be doing this, talking to press. Lomachenko you could tell was being made to do it. And I kind of handled him the same way. I ain’t chasing, if you don’t wanna do the dance, which by the way benefits you, then I will approach another partner. It’s not just Bud.

I dove into that Coppinger story and read about Bud not being happy, according to a laywer who reps him. And I read about Top Rank working to set up a Pacquiao vs Crawford fight, and the story indicates it got close to a finish line.

So, this I hadn’t known, it seems as though they were near a finish line to make Crawford v Pacman. ..”But before Top Rank could close the deal, the Qatar Tourism Authority decided the continued outbreak of COVID would prevent the event from happening this year.” So, the way I read it, blame COVID, no? No? Blame the promoter, period?

I messaged Mcintryre, to broach the subject, get the Crawford side, but didn’t hear back. I will insert a response if one is offered.

Because, damn right, this is a layered story, with nuances I didn’t get into. (And what we know now helps us understand what was up with Bob Arum’s lack of joy when talking Crawford-Brook Nov. 4.) Like, is it “the fault” of Top Rank that Al Haymon wanted to handle his business that particular way, and keep his welters fighting each other? Not having a smooth path to make Spence vs. Crawford, that hasn’t benefitted fans, it’s safe to say. (It’s fun to go back and read some of the predictions people had as to whether Spence v Crawford would ever happen.) But also, I’d say if you think it is wrong of Haymon, then you have to say or at least consider the same when Top Rank keeps things in house instead of reaching across the aisle to make an inter promotional fight.

This will continue to play out, and I bet it gets nastier rather than simmering down. “Crawford seems to be content with closing out the back half of his career one win at a time,” Andre Ward says in the close of Relentless. “But will this approach be enough to be remembered as an all time great. At this point, only time will tell.”

Indeed; and I think we are moving towards some much more ‘interesting’ times ahead for Terence Crawford. And know what? I don’y think that’s a bad thing. It’s truth time. Let’s get some of these realities on the table, hash em out, about Bud’s place in the sport, his legacy, how he himself has affected perception of him and his ‘value,’ all of it.