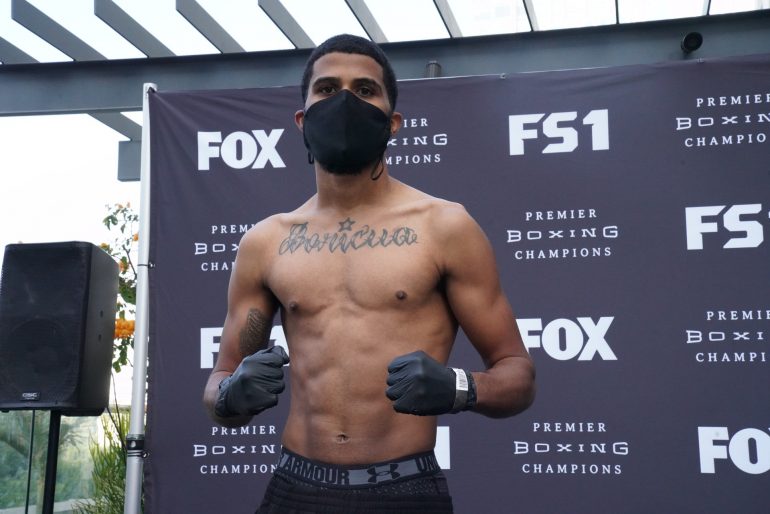 Kent Cruz’s first fight with renowned trainer Ronnie Shields was a successful one.

The unbeaten junior middleweight never broke a sweat as he battered an outclassed Erik Castillo to earn a second-round stoppage in their scheduled six-round affair.

The fight served as the chief support to the PBC on FS1 main event featuring welterweights Eimantas Stanionis and Justin DeLoach squaring off in a 10-round bout at Microsoft Theater in Los Angeles.

From the outset, Cruz (16-0-1, 10 knockouts), 27, of St. Louis, fighting for the first time in 20 months, stepped on the gas and never lifted as he pummeled Castillo with crisp lefts and rights that left his opponent biting down on his mouthguard.

In the second frame, a stiff jab hurt Castillo and Cruz continued to attack him at will.

Castillo’s corner halted the fight before the start of the third frame after their fighter complained of a headache.

Kent Cruz picks up his 16th win by TKO! pic.twitter.com/srcozjgthY

Chordale Booker escaped with his unbeaten record intact Wednesday night, but it was no easy task.

The junior middleweight prospect survived a hellacious offensive onslaught from Sonny Duversonne in the seventh round to win a split decision in their eight-round bout.

Judge Don DeVerges scored it 77-75 for Duversonne but was overruled by Carla Caiz and Damian Walton, who had it 77-75 for Booker, who improved his winning streak to 16 fights.

According to Compubox punch statistics, Booker outlanded Duversonne 132 to 131.

The 29-year-old Booker (16-0, 7 KOs), of Stamford, Connecticut, fought for the first time since outpointing Wale Omotoso in a 10-rounder in May 2019. Three months later, he underwent surgery to repair a torn right Achilles tendon.

In round three, Booker backed Duversonne into the ropes with a chopping left hand.

Booker connected with another strong left hand in the fourth round that backed up Duversonne. However, Duversonne nailed Booker with a hard right hand in the closing moments of the round.

Booker landed with the best shot of round five, a right hook that froze Duversonne in his tracks.

However, Booker appeared winded before the start of the seventh round as blood leaked from his nose. Duversonne responded with his best performance of the evening.

A huge right uppercut and a right cross buzzed Booker and forced him to clinch with just over a minute left in the round.

Duversonne sought to knock out an exhausted Booker in round eight, but it was all for naught. A clean right uppercut landed for Duversonne, but it was too little, too late, as Booker remained unbeaten.