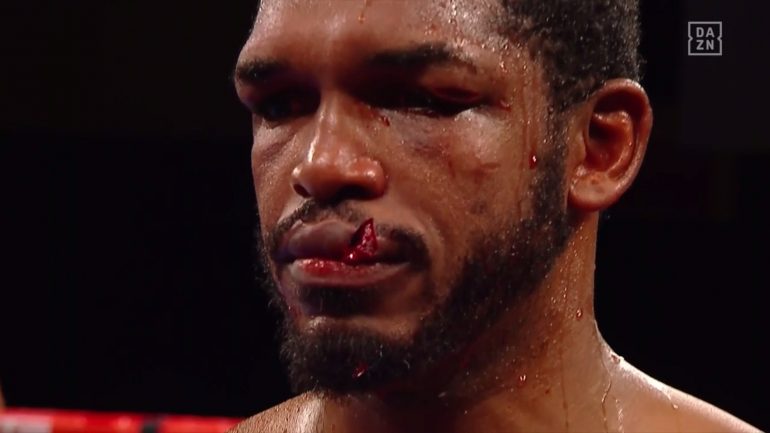 Jaime Munguia had his hands full for six rounds against Tureano Johnson, but managed to get the win on Friday night after Johnson’s lip was split in half – like an old hook had been ripped from the mouth of a fish – at Fantasy Springs Casino in Indio, Calif.

The fight was stopped after the sixth round by the doctor, bringing a premature end to the former WBO junior middleweight titleholder’s second assignment at 160 pounds, and third fight under head trainer and fellow Tijuana, Mexico champion Erik Morales. The cut was not unlike the one that Arturo Gatti suffered in his 2007 knockout loss to Alfonso Gomez.

This @jaimemunguia15 uppercut led to the cut that awarded him the KO. pic.twitter.com/Ccczz7P2Ru

The freak injury was the product of a right uppercut from Munguia (36-0, 29 knockouts), who had to use more of his boxing ability and counterpunching against the aggressive Johnson (21-3-1, 15 KOs), who was in the fight all the way until the end. The ringside physician gave Johnson the remaining 20 seconds of the round to make something happen, but Munguia had the advantage and rocked Johnson with a right hand right after the bell, and was bloodied and swollen as he walked back to his corner.

Johnson, 36, of the Bahamas, got off to a quick start in round one, making it rough on the inside for the 24-year-old Munguia, landing with chopping right hands when he’d get in close. Rounds two and three were better for Munguia, as he created his space with movement and began to land sharp counter punches.

Johnson never stopped coming forward, even as his eyes began to puff from the heavy punches coming his way. Munguia began the sixth round with a punishing flurry, but as he slowed to catch his wind, Johnson picked up the pace and began chopping down with rights again. The fight was still competitive at the moment the uppercut split Johnson’s lip.

The fight aired live on DAZN in the United States.