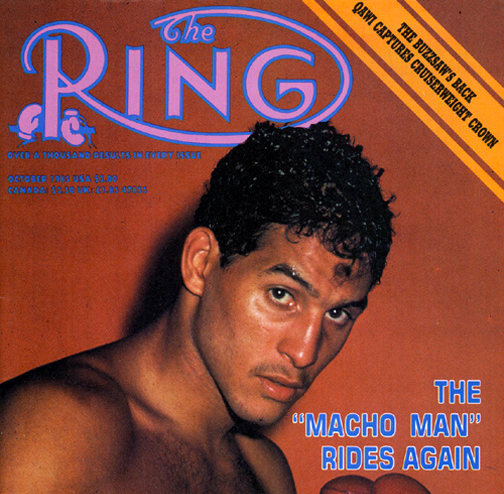 You can’t say he was born at the wrong time, because his ring generalship, his considerable skill set and his out-sized personality successfully stood out, and brought plenty of that fortume and fame Hector Camacho craved.

But you do have to ponder, when mulling the life and times of “Macho” Camacho, the super talented and oft troubled pugilist from Puerto Rico and then Spanish Harlem, that he’d fit in so well today, because he was so sharp in building his brand, and leveraging his charisma.

Film-maker Eric Drath made “Assault in the Ring” (2008), as must see as you can get for fight docs.

Drath grew up in the upper East Side of NYC and would see Camacho and his Lambo at the movie theater at 86th and 3rd. The fascination he felt stayed with him as he grew up watching Hector’s fights, and reading up on Macho’s fights outside the ring, when his dark side yearnings out-jabbed his better instincts.

After Camacho got shot and killed in Puerto Rico, in 2012, Drath knew he’d do a project on the flamboyant pugilist, who left behind a 79-6-3 record. 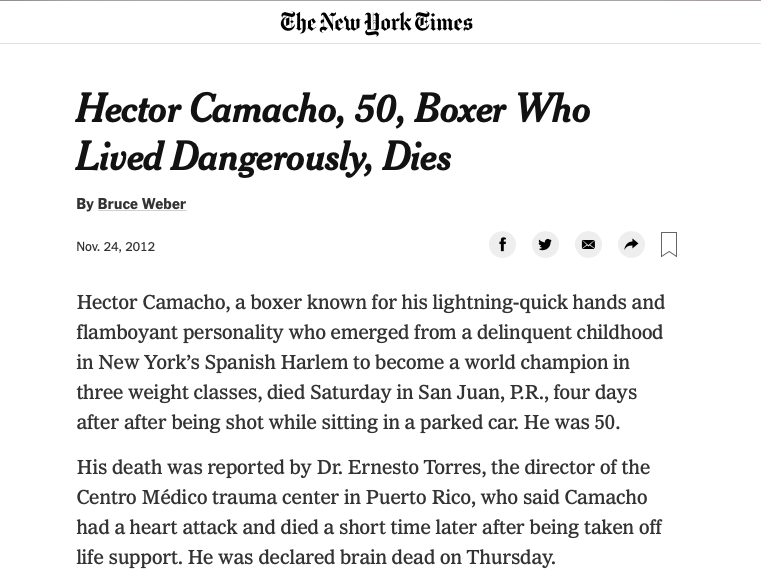 He started working on the effort in 2013, and for the last two years, has been flurrying hard on the film portrait of Camacho, who passed on at age 50 after having won titles in three weight classes.

“I started working on this soon after his death,” said Drath, whose credits include “Renee” (2011; spotlighting the tennis standout Renee Richards’ transgender journey). “I was filming ‘No Mas,’ and so I was with Roberto Duran. I asked Duran if he’d heard the news. And he did, I swear, he teared up. That shows you the impact Hector had on the sport.”

Drath was working in news in 1997, and met Hector when “Macho” took on Sugar Ray Leonard, in Leonards’ last fight. In the earlier 80s, Camacho was a capital C character and still he was that in ’97, and beyond, as he played out the string, doing what he knew how to do best, in the place he was most comfortable, the boxing ring.

“He took what Ali did, and he quadrupled it,” Drath told me on Tuesday. “He created a brand and what he did transcended beyond the sport.”

Camacho started building the brand in the NY Golden Gloves, back when that was an ultra challenging obstacle course that got you good and ready for the pros. He won the Gloves three times, and wanted to catapult off an Olympics gold but got beat in a June 1980 box-off. On Sept. 12, 1980, Camacho fought for the first time in the pro ranks, and he was off on a 30 year climb which featured plenty of valleys, his judgment frequently got clouded when he was partying.

On November 20, 2012, Camacho was living in Puerto Rico, and not hanging out with choir boys. Sitting in the passenger side of a car driven by a running mate in his native Bayamon, Hector couldn’t slip the bullets that slammed into the vehicle. Hector got shot in the face, while the assailants sped off, getting into a shootout with cops. They got away, and Hector got rushed to a trauma center. He suffered brain damage, and four days later, he was taken off life support. Macho didn’t get the chance to maybe see that light, late, and tame the demons that had him succumb to temptation. “And six years after that, I realized, this case was still unsolved,” Drath continued. “There were so answers. No mom should have to endure their son being murdered, with no justice, no family should have to endure that.”

The project started and continued as a straight investigation, with Drath making the rounds, digging, looking to help achieve closure, with justice obtained. But he realized that he needed to convey more of the sunnier side of “Macho,” flesh out that character, so people would better grasp the size of the loss to the sport. Drath has worked the angles and, he says, will reveal plenty of details that haven’t been reported which will be illuminating.

“Macho Camacho’s charisma, boxing prowess and flamboyant style made him a Puerto Rican sports icon, and, for a time, the biggest star in boxing. When he stepped into the ring, everyone knew it was ‘Macho Time,’” said Stephen Espinoza, President, Sports and Event Programming for Showtime. “This film reveals the complex highs and lows of Hector’s life: the joy he brought so many, as well as the demons that he battled privately behind the scenes. Through it all, however, Camacho brought boxing a level of showmanship and flamboyance that was far ahead of his time.”

This being Showtime, viewers will take in the handling of Camacho’s tangos with Roberto Duran, Leonard, Julio Cesar Chavez, Ray “Boom Boom” Mancini and Vinny Pazienza, and finish watching and I think appreciate the pairing of product and platform.

“Hector would have had some following on social media today,” said Drath, when I asked him if he worked to show Hector in a way that speaks in context to the ubiquity of hand-held devices which so many of us find is as addicting as a drug. “He was always unscripted, you never knew what was coming next. He had that fun side, and that dark side. Unfortunately, he never did tame those demons.”