Vasiliy Lomachenko doesn’t hold back on Teofimo Lopez: ‘I want to beat him very badly’ 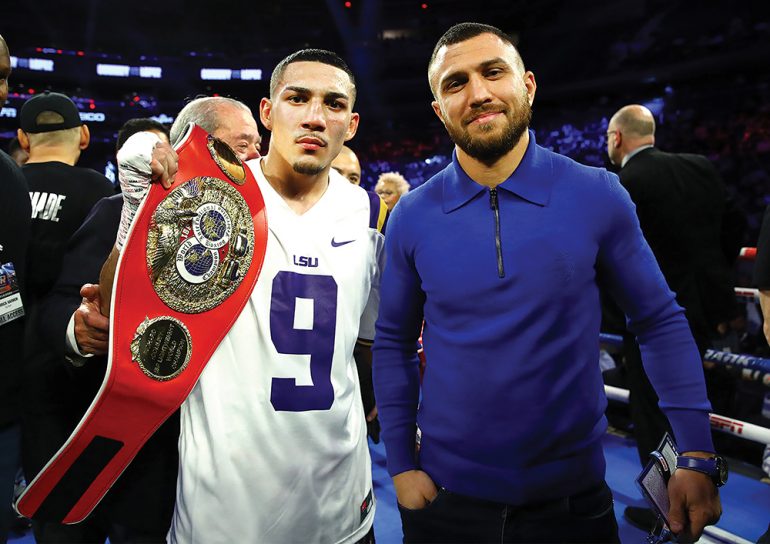 Vasiliy Lomachenko is a man of few words and rarely does he waste them with negative things to say about his opponents. So, even though Teofimo Lopez Jr. and his father and trainer, Teofimo Lopez Sr., have spent the better part of the past few years constantly trash talking him and trying to goad him into a fight, Lomachenko has remained above the fray.

But the fight, easily the biggest in boxing since the coronavirus pandemic began earlier this year, is on now. And in a rare moment Lomachenko appears to express his true emotions about the long-simmering showdown.

“I want to beat him very badly, very, very badly. I want to really beat him badly,” Lomachenko told The Ring in a recent interview. “(Lopez’s father) thinks (Lopez is) a big superstar like Tyson Fury. That’s why they do the trash talk. They act like they’re a big superstar, but they’re not.”

Asked if he has any genuine bad feelings toward Lopez and his father, Lomachenko was quick to answer.

But more than any dislike for the Lopez team, Lomachenko said he is simply focused on winning.

“I have a goal. I have a dream,” Lomachenko said. “He holds a belt, IBF title. I need this belt. I will try to take this belt.” 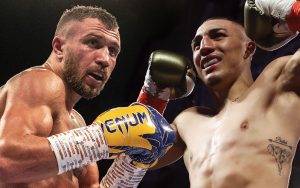 Lomachenko, The Ring lightweight world champion, and Lopez will meet for the title as well as to unify their three sanctioning body belts on Saturday night in the main event of the Top Rank Boxing on ESPN card (7:30 ET, ESPN/ESPN Deportes/ESPN+) in a highly anticipated bout inside the bubble of the conference center at the MGM Grand in Las Vegas.

Top Rank chairman Bob Arum said he believes Lomachenko is taking this fight a bit more personally than any of his others because of the persistent verbal jabs from Team Lopez.

“Because nobody has trash talked him before,” Arum said. “You look at all the other opponents, they were guys who were confident, not confident, guys who were respectful and this is the first opponent that he’s had who has done the trash talking, so he wouldn’t be normal if he didn’t react. But let me tell you something – I visited him (recently in camp). I spent quite some time with him, watched him train. I mean he is dedicated. He is serious. I mean, he is a machine. But, again, I would have said that about all of his fights. Lopez has been trash talking, so this is something that hasn’t been done to Lomachenko, so obviously there’s a reaction. He’s just responding to the trash talk.”

But Arum added that he did not believe that the Lopez talk would at all get under Lomachenko’s skin enough to take away any of his professionalism in preparation for the fight. 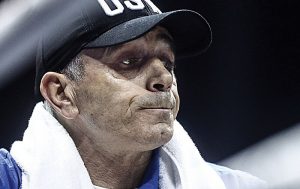 “It would be perceived in the media as Loma’s biggest win if he wins, but I don’t know if he feels that way,” Arum said. “He’s a very stoic guy as is his father (and trainer Anatoly Lomachenko). What’s beneath the surface I couldn’t tell you. To me it’s the usual Loma. He’s totally under control.”

Lopez backtracked a bit from the perceived personal animus toward Lomachenko during a recent media videoconference to promote the fight.

“It’s not so much to get under his skin or anything. If anything, my father may be one of those guys because they had their own altercation in person.”

The fight was initially in the works for May before the coronavirus pandemic shut down the sports world. But it’s been a fight that has been a long time coming, one the Lopez side was focused on long before Lopez even won his 135-pound belt by crushing second-round knockout of Richard Commey last December.

While Lopez talked about fighting Lomachenko virtually since he turned pro in 2016, the tension between the camps took more serious shape in December 2018 when Lopez was set to fight Mason Menard on the undercard of Lomachenko’s title unification fight against Jose Pedraza in New York.

With everyone staying at the same Manhattan hotel for fight week, it was inevitable they would run into each other at some point, and they did late one night when Teofimo Sr. got in Lomachenko’s face unprovoked. He had some nasty things to say and, minus the curse words, told Lomachenko his son would upstage him on fight night and eventually fight him and destroy him.

Lomachenko remained calm but was clearly not happy about being confronted by somebody he did not even know.

While the younger Lopez always wanted to fight Lomachenko, once he claimed a world title the fight became very attractive to Lomachenko as well. And since they are both promoted by Top Rank the fight was, at least relatively speaking, easy to put together.

The 23-year-old Lopez (15-0, 12 KOs), a Brooklyn, New York, native who fought for his parents’ native Honduras in the 2016 Olympics, moved quickly as a pro while scoring a series of highlight-reel knockouts en route to his world title victory.

But no modern fighter moved as quickly as Lomachenko (14-1, 10 KOs), 32, did as professional because of his gargantuan amount of amateur experience, which included a record of 396-1 – he avenged the loss twice — and Olympic gold medals in 2008 and 2012 as perhaps the greatest amateur of all time.

That set the stage for a professional career that has included winning world titles in three divisions: featherweight, junior lightweight and lightweight) and setting a series of records.

Other than his professional debut, a scheduled 10-rounder he ended in the fourth, all of his bouts have been world title fights, including a sixth-round stoppage win over Guillermo Rigondeaux in a hugely hyped 2017 junior lightweight title defense in the only bout ever between two-time Olympic gold medal winners.

Lomachenko’s entire career has been based on his desire to set records and win as many belts as possible. He has talked about those goals since Day 1 in the pro ranks. It is why he was glad to make the fight with Lopez, who will be making his first defense, once he won a belt. 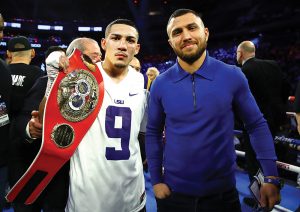 “Of course, I am excited,” said Lomachenko, who will be making his fourth defense. “I want this fight. It’s for the IBF title. It’s the next step to my goal, to be undisputed. I am so excited because when I came in professional boxing I always have a goal. I have a dream in professional boxing and it was unificate all titles. I was trying to do this at 126, then I was trying 130 and now it’s very close at 135.”

But Lomachenko, who will be fighting for the first time since outpointing Luke Campbell 14 months ago, is also looking forward to shutting the mouths of Lopez and his father.

“Back home if you insult somebody and said something you can get hit and get in a fist fight on the street and nothing’s gonna happen. If you beat somebody you just walk away,” Lomachenko said. “Here in the States, it’s completely different. At home people aren’t running their mouth because they know they will have to answer for it. If we were in my country, he’d learn pretty quick he can’t run his mouth. If I get a chance to cause him pain, I’m going to do it.

“He has a good punch. He very good speed, he has IQ. He’s young, he’s hungry, but I’m gonna try to hold him under water as long as I can without oxygen.”