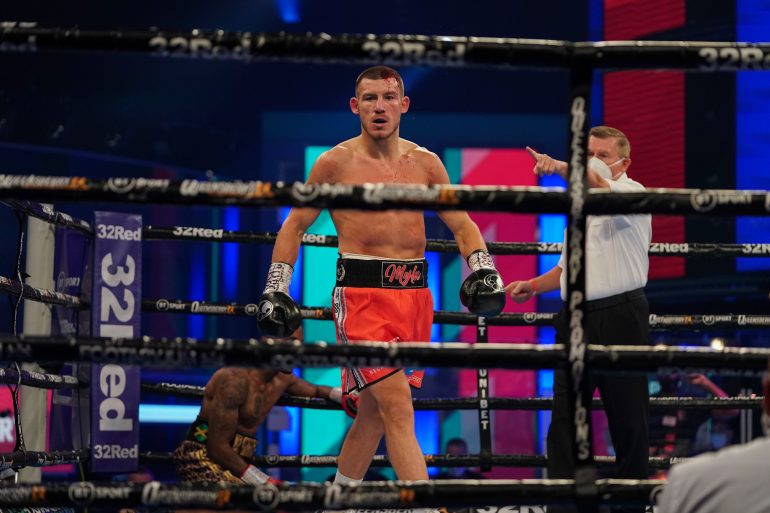 You don’t get paid for overtime.

Welshman Liam Williams successfully defended his British middleweight title with a shuddering first-round knockout of Andrew Robinson at the BT Sport studios in London on Saturday. The official time was 1:28.

Williams, who is rated No. 10 by The Ring at 160 pounds, was cut on his hairline from a clash of heads in the opening moments and he reacted furiously with a sustained burst of action. Solid head shots had the challenger tottering, but it was brace of solid body blows that sent him to the canvas and that was all she wrote.

“I wanted it to go a bit further, but we clashed heads, so I just said, ‘Let’s get this over with before they call it a technical draw,’” said Williams (23-2-1, 17 knockouts) in his post-fight interview with BT Sport.

Robinson, who was also cut from the head clash, seemed more embarrassed by the whole affair than hurt. The Englishman objected when Marcus McDonnell completed the 10-count but, in reality, he didn’t have a prayer.

Williams, 28, is the mandatory challenger for WBO middleweight titleholder Demetrius Andrade and he is eager to get that fight made immediately.

“When and where? Give me the date and I’ll be there,” said Williams. “[The WBO] need to start enforcing it and pushing for it because I want my opportunity and I want it next.”

British heavyweight Nathan Gorman (17-1, 11 KOs) scored a dominant 10-round unanimous decision over Richard Lartey (14-3, 11 KOs). The official scores were 100-90, 100-90 and 99-92. The bout was relatively one-paced, there were no knockdowns, and neither fight was really hurt, but the Ghanaian puncher lacked the imagination and versatility to trouble the home fighter. Both men were coming off a stoppage defeat to Daniel Dubois in 2019.

Scotland’s Willy Hutchinson (13-0, 9 KOs) blasted out Jose Miguel Fandino (15-8, 8 KOs) in one round at super middleweight. Following a cautious opening minute, Hutchinson elected to go through the gears and a rapid attack to head and body put the Spanish fighter on the canvas. Fandino, who was coming off a seventh-round TKO loss to former two-weight world champion Sergio Martinez in August, gamely got to his feet and was fit to fight, but another two-fisted barrage prompted referee Ian John Lewis to step in and halt the action. The official time was 2:49.