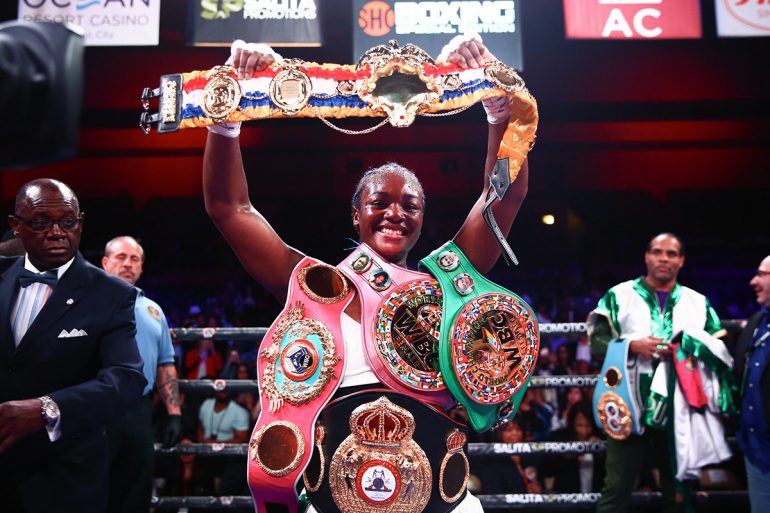 The history of female boxing is built on examples of groundbreaking sacrifice in the face of prejudice and rejection.

It is the story of Cecilia Braekhus, who became a fighter even knowing that boxing was forbidden in her country of Norway.

It is the story of Katie Taylor, who cut her hair to look like a boy and rushed out of the gym in her sweat-soaked clothes to avoid revealing herself as a woman in the dressing room after sparring with boys.

It is the story of Marcela Acuña, who chained herself to the door of the Argentine Boxing Federation until they finally issued her professional license, her country’s first-ever for a woman.

It is the story of Yesica Bopp, who had to fight her gym mate and friend Alejandra Romero in her amateur debut (her country’s first-ever female amateur boxing bout), after inspiring each other to become boxers and finding that there were no other opponents willing to take on either one of them in the ring.

It is the story of every boxer, male or female, who has chosen the sport as an avenue to escape poverty and a life of even more danger in the streets, but compounded with the problems that every woman faces in the daily uphill battle of trying to succeed in a man’s world.

The fabled Ring title belt, worn by their male counterparts for nearly a century and displayed proudly on rings, podiums, parades and glass cases across the world, was one of the many things that remained unattainable for female fighters worldwide, another symbol of the chasm that separates them from the full legitimacy they earned in the ring.

The creation of The Ring’s Women’s Ratings Panel seeks to reverse that, and with rankings already created in 15 divisions and being updated weekly, it is only a matter of time before those belts find their way into the hands of more and more women who, like our two first titlists, Katie Taylor at lightweight and Claressa Shields at middleweight, may one day be able to lift them above their heads as a symbol of their status as undisputed world champions.

The challenge is already on, and the protagonists already have their eyes on the prize.

“I think this is a fantastic step forward for women’s boxing,” says Scotland’s Hannah Rankin, currently occupying the No. 4 slot at middleweight, where The Ring’s pound-for-pound queen, Claressa Shields, reigns supreme. “We are definitely getting more recognition by the mainstream public and I think it’s great that The Ring Magazine have decided to put out its first ever women’s rankings. The Ring Magazine Belt is considered by most as one of the most prestigious titles to hold, so having it become even more of an opportunity for us ladies is just fantastic.” 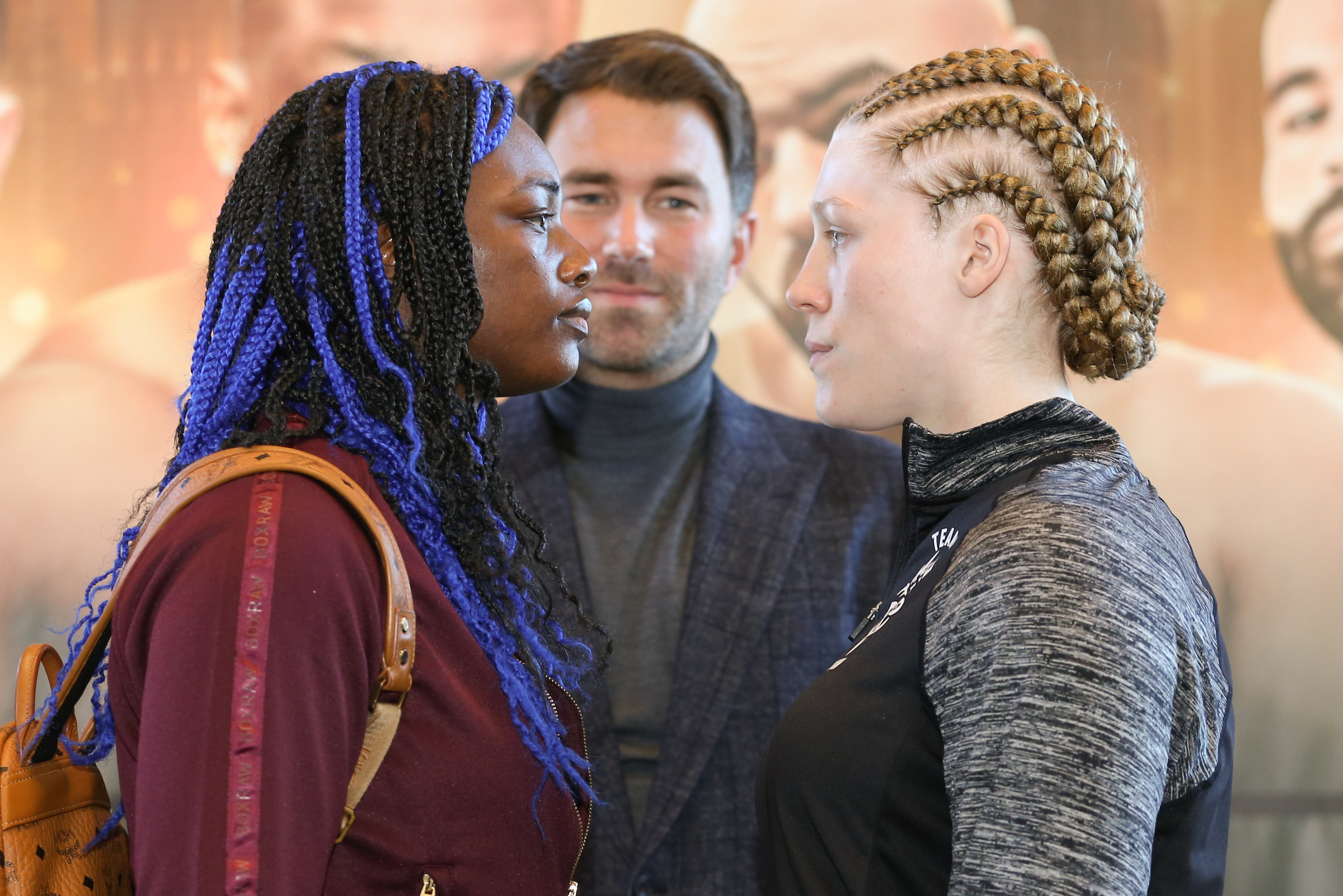 The chance of being recognized as the “last woman standing” is not lost to her, and neither it is for another candidate for supremacy in a neighboring division.

“Having only one champion in each division is what I’m used to coming from an amateur program, but on the contrary I’ve realized that in the professional ranks different belts provides many opportunities for others around the world,” quips Franchon Crews-Dezurn, a current WBO/WBC titlist in the super middleweight division, from across the pond. “There are so many ‘technicalities,’ where some champions don’t have to defend their titles and some champions are forced to. Having all those belts locked up with one of the champions who’s not obligated to defend like others would be detrimental to the game. If the standards are held the same across the board I’m down for one champion, for legacy. The multiple champions are for business I suppose. I want to be the best, so I want all the belts, including The Ring’s belt.”

Not only champions are excited about this new chance to lay claim to the status of undisputed ruler of a division. The younger up-and-comers are ready to take on the challenge as well. 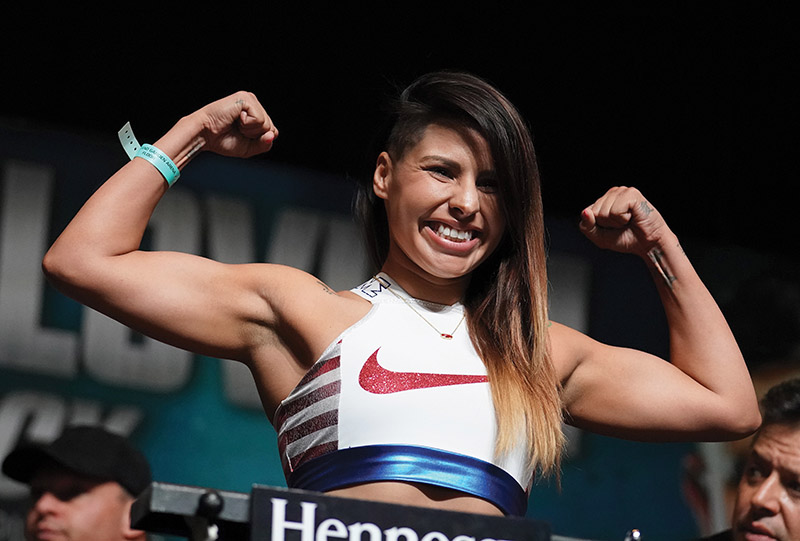 “I think it’s a good thing. I’m really happy they are going pound-for-pound, and I think it will make women’s boxing more competitive,” says Olympic medalist and current flyweight contender Marlen Esparza. “Hopefully give us more room for fighting three-minute rounds. I think it will force us to fight harder and longer — and now people can’t babysit their belts.”

A fellow fighter who has risked and won every title imaginable agrees with her, from one of boxing’s most distant corners.

“I think that female athletes all over the world will be happy to aim for it,” says Japan’s Naoko Fujioka, a five-division titlist and one of boxing’s most decorated female fighters. “I’m proud to be on the same steps as men. It means that we can fight beyond the four major (sanctioning bodies), and I think we can decide who is the real number one. I want to aim for the Ring Magazine belt if possible!”

The meaning of that final accolade to seal a historic career is not lost to another one of female boxing’s most noteworthy pioneers, too.

“I am very happy to be part of this ranking, which is so well known worldwide,” says Marcela Acuña, currently ranked No. 1 at super bantamweight and No. 10 at pound-for-pound by The Ring. “I am also very proud that there are three Argentine fighters (in the pound-for-pound Top 10). I remember that when I started my fight to have professional women’s boxing regulated in Argentina, I didn’t only do it for me or to become a world champion one day, but also because I realized that this had to be geared towards the future, and thinking especially about all those women who wanted to practice a sport and who were not being allowed to do it. I never doubted that this would be the case.”

After 19 years of her historic “fight to fight,” in which she had to travel to the U.S. to debut as a professional against two first-ballot Hall of Famers like Christy Martin and Lucia Rijker in her two first pro bouts (an unthinkable challenge, in any sport), Acuña can now boast the unique achievement of being the first Argentine fighter, male or female, to have hold titles from all four major organizations, and should she fight (and win against) Jackie Nava in a rematch, she could add The Ring’s belt to her collection.

Still, the always humble Acuña sees herself not so much as a legendary champion, but as the first of a series of many champions that will enhance her legacy as they build upon their own. 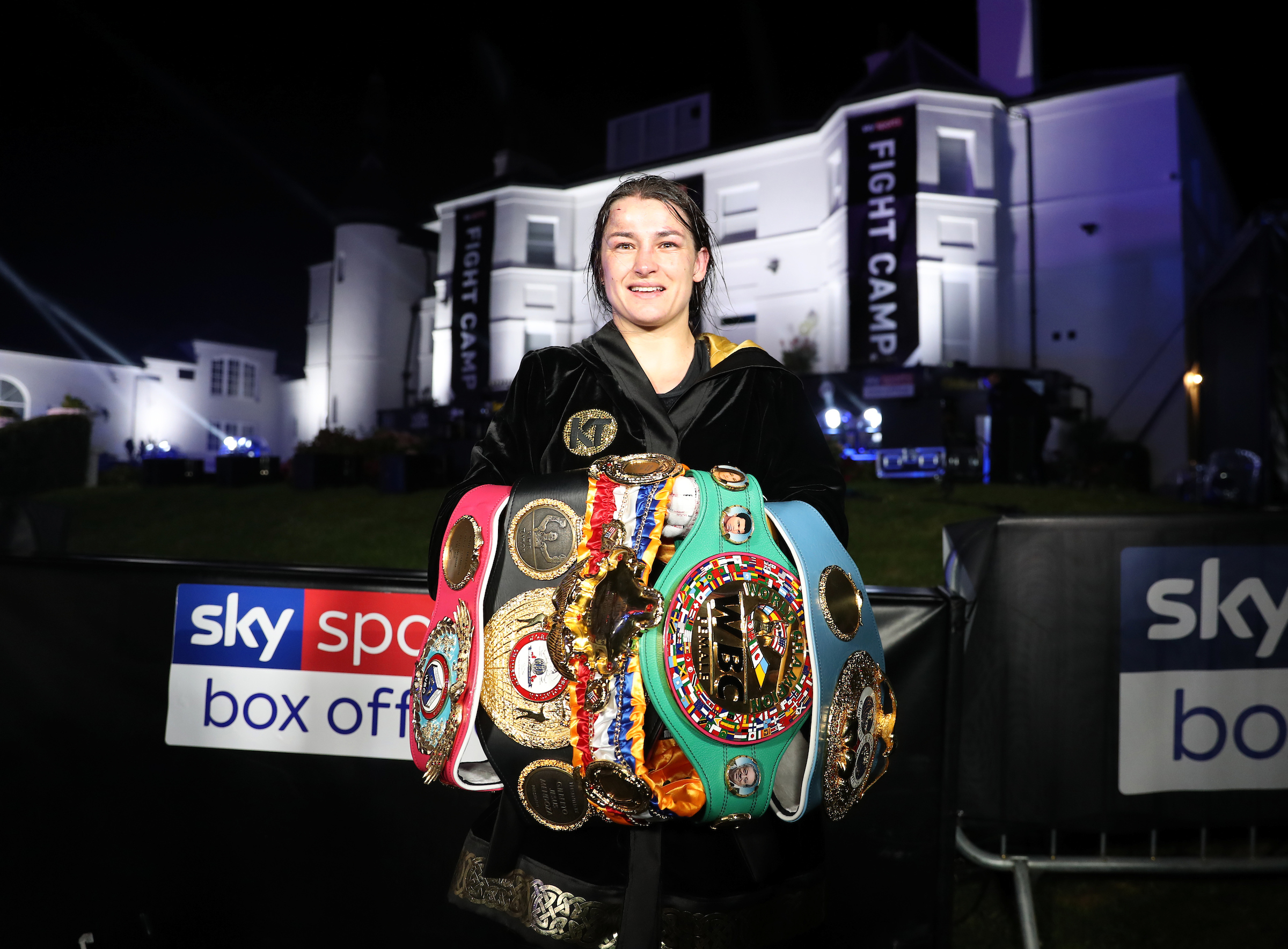 “I am happy to see that we’ve had almost 30 world champions, and right now we have 11 current world champions, which is no small feat if we compare it with other countries. As years go by, I am sure there will be more Argentine fighters in this ranking as well.”

Some of them are already there and even sitting above her in the pound-for-pound list.

“It is very exciting for us to have this opportunity,” says the usually laconic Daniela Bermudez, who defeated Acuña in 2018 after growing up idolizing her, and who is also a champion in her own right at bantamweight, as well as being The Ring’s No. 8 pound-for-pound entrant. “Having three Argentine fighters in the Top 10 is awesome and it is a source of pride, and I hope there will be more great things to come for us in the future.”

Rounding up the trio of great Argentine fighters in the pound-for-pound ranks, another pioneer of the game agrees with her.

“Having The Ring creating this ranking and coming up with those titles is a positive advancement for female boxing,” says Yesica Bopp, the country’s first medalist and one of the most accomplished fighters in any division, currently sitting at the top of the junior flyweight division where she has held her WBA title for over 11 years, and now No. 6 in The Ring’s pound-for-pound lists.

Her already legendary dedication to the gym and her trade, which she now shares with aspiring fighters in her TV show “Escuela de Boxeo” (Boxing School) alongside her co-host and former champ himself, Sergio Martinez, inspired a long list of female fighters in Argentina, including her first opponent Alejandra Romero, who went from gym mate to babysitter for her newborn daughter to using that money to pay for her studies to become a coach and then debut as such with a job as a trainer… in Bopp’s own gym. It’s a touching testimony to the sorority and solidarity among peers that has fueled the explosion of female boxing to the levels that is has reached nowadays. 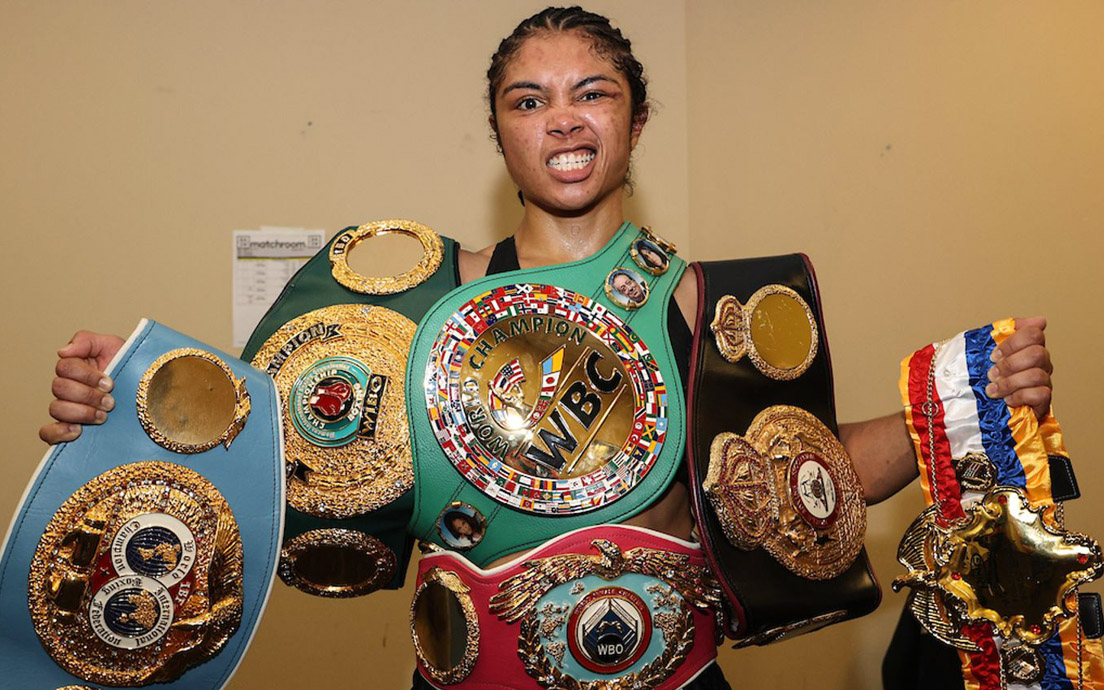 “We could have never imagined achieving all of this,” says Bopp, speaking on behalf of Romero too. “We fought even though we were friends, just to kickstart a new chapter in history, and that paved the road for everyone else. And now I am happy because this could open the doors for me to fight in the United States, which is my biggest dream.”

If it happens, it will not be the first door that Bopp has kicked open, as so many other fellow female fighters have done in their own time and their own situation. Many other things may remain unattainable for all of them for now, but a step in the right direction has been taken, and the sight of Ring belts being lifted by women of all countries and will soon become a reality.

Updates to the Women’s Ratings – September 29

Even though several ranked fighters saw action during the past week, the consequences of the lockdowns imposed by the COVID-19 pandemic were clearly visible in the women’s boxing schedule, as most of the fighters were limited in the choice of opponents due to travel restrictions around the world.

In the junior featherweight division, Denmark’s Dina Thorslund retained her WBO title with a win over Serbia’s Nina Radovanovic, and Mexico’s Yamileth Mercado was forced to engage in a stay-busy, non-title bout against fellow Mexican Irasema Rayas. No movement was suggested for either fighter based on those wins.

In the atomweight division, two top-5 fighters saw action. Czech WBC titlist Fabiana Bytyqi defeated Slovakia’s Claudia Ferenczi in non-title bout, a rematch. A suggestion by a panel member to move Bytyqi up one spot did not receive any additional votes.

In Japan, Mika Iwakawa defeated Nanae Suzuki with the WBO title at stake in this all-Japanese bout. A suggestion to move Iwakawa to the No. 4 spot in our list was accepted by the majority of the voting members, with the strongest dissidence coming from the only member of the panel who attended the fight. A video shared by Japanese member Yuriko Miyata showed an uninspiring performance by both fighters, but the win alone served to prop up Iwakawa’s claim to a higher position, given her opponent’s record and a 4-0 winning streak when compared to Nao Ikeyama’s deceptive but official 0-3-2 record during that same three-and-a-half year period.