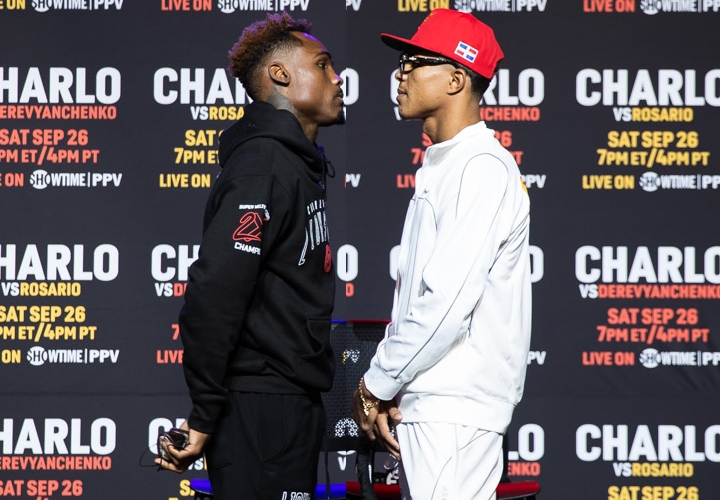 For the past few years the junior middleweight division has boasted plenty of talent and produced many exciting title fights. One thing it has not had, however, is true clarity as to who is the No. 1 boxer at 154 pounds.

The belts have been passed around like plates of wedding hors d’oeuvres with Erislandy Lara, Jarrett Hurd, Jermell Charlo, Julian “J Rock” Williams, Jeison Rosario, Tony Harrison and Patrick Teixeira, among others, all taking turns holding various versions of the title.

Charlo, for example, lost his belt by close decision in upset fashion to Harrison in December 2018 and two fights later regained it by stopping him in the 11th round of their rematch one year later.

Hurd looked like he might put a stranglehold on No. 1 when he unified two belts by decision in a dramatic 2018 slugfest with division stalwart Lara, but then he lost them in May 2019 by upset decision to Williams, who spoiled his homecoming fight.

And then Williams, making his first defense in front of his hometown crowd in Philadelphia in January, lost both belts when he got knocked out in the fifth round by the unheralded Rosario.

And so here we are with Charlo and Rosario, widely seen as No. 1 and 2 in the division, and holding three of the four major titles, ready to square off to unify their belts and contest the vacant Ring Magazine championship.

Their best-against-the-best fight will culminate a doubleheader consisting of six total fights on Saturday (7 p.m. ET/ 4 p.m. PT, Showtime PPV, $74.95) at the Mohegan Sun resort in Uncasville, Connecticut, and, barring a draw, it will identify the true No. 1 in the junior middleweight division.

“This is about my legacy and my career. I want everyone to see what I’m made of,” Charlo told The Ring. “Rosario is a tough fighter with a lot of good attributes. He’s coming to fight. Styles make fights and we’re going to see that in the ring. I’ve been boxing for so long and it’s been my dream to win multiple belts, you can expect me to get that win. I’m going to dominate. I don’t want to leave this up to the judges. I’m going to dominate or win by knockout. That’s how I do it.”

Rosario is also confident coming off the upset of Williams.

“I am even hungrier now than I was before I won the titles,” Rosario said through a translator. “I’m more motivated. The desire inside of me and the fire inside of me is burning to win this fight against a great fighter in Jermell Charlo.

“Jermell Charlo and Julian Williams are definitely two different types of fighters. I think Williams has a little more quickness but Jermell is definitely stronger and has more power. That’s why I’ve had to prepare a little differently for this fight.” 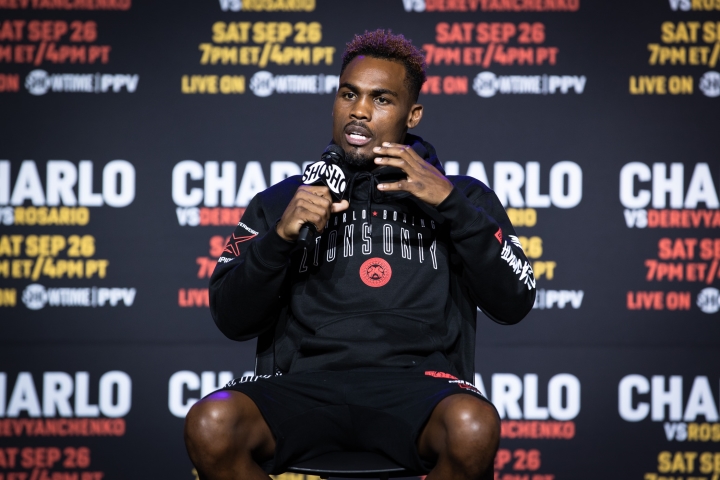 The 30-year-old Charlo and his twin brother Jermall Charlo (30-0, 22 KOs), who is defending his middleweight world title in the main event of the first half of the doubleheader against top contender Sergiy Derevyanchenko (13-2, 10 KOs), are the stars of the show on their first pay-per-view event. It is not lost on Jermell what is at stake for both of them.

“We’re going to put on a show. Knowing my brother is also fighting gives me more energy,” said Charlo, who defended his belt three times during his first reign before the loss to Harrison. “Fight night is when you see all our excitement and all our hard work pouring out. This is huge for us. We’re both doing our thing and feeding off each other’s energy.

“Saturday night is going to be my history-making performance. This is something that I’ve always wanted and that I’ve always trained for. I’ve put in the hard work for every fight I’ve ever had, and this is what it’s all been for.”

Fighting for the Ring Magazine title is also significant to Charlo, who will be vying for a title that has been held by legends such as Sugar Ray Leonard, Thomas Hearns, Oscar De La Hoya, Shane Mosley, Winky Wright, Canelo Alvarez and Floyd Mayweather.

“The Ring Magazine belt, it does mean something to me because I’ve always seen it and seen other people accomplish that goal,” Charlo said. “Just receiving that belt is another accomplishment. It will let me know, let my kids know about my legacy. It also should put me in the top pound-for-pound. I look at that belt as a good thing. I take that belt seriously. It’s something big for me. I respect it.”

Said Derrick James, Charlo’s trainer: “The best things is what it would mean for Jermell to have (four) belts. This is about legacy. It’s about a legacy fight for Jermell and myself.

“I expect Rosario to be very dangerous. He’s a big puncher and he has a lot of aggression, but at the same time he’s got great boxing skills.” 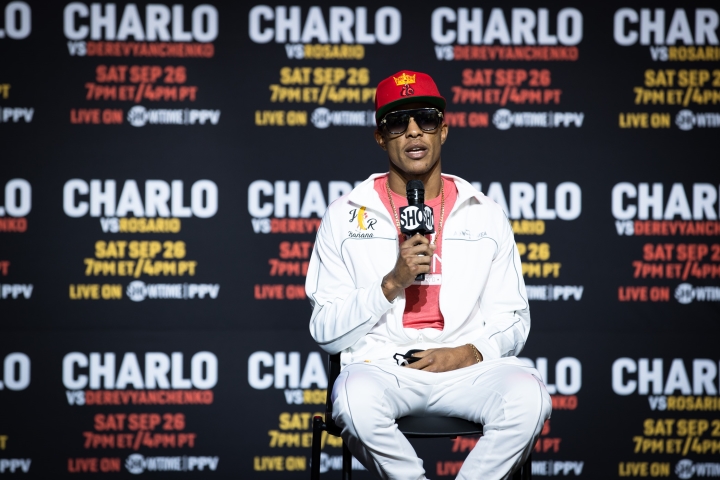 Charlo (33-1, 17 KOs), of Houston, has seen Rosario fight and examined his record but is also aware that in his lone defeat, to Nathaniel Gallimore in 2017, he got knocked down three times in a sixth-round knockout loss.

“I believe his performance was good. He overwhelmed Julian,” said Charlo, claiming Rosario’s win did not surprise him. “I also believe Julian might have a lot going on (leading up to) that fight. That probably led him to not follow the game plan. Rosario comes into this fight with a lot of confidence because he beat somebody at the top that he took the belts from. I’m a different animal, though. I can box and move and I don’t think he can beat me at either one. My confidence is higher than his can possibly be. I’ve done this for so long at a very high level and I don’t think he’s reached that capacity. I run the show. I don’t want to tell you everything I’m gonna do but I’m ready to fight.”

As for the knockout loss Rosario took, Charlo isn’t banking on him folding under his pressure but knows he can be hurt.

“I’m not looking at it like he got knocked out by Gallimore a few years ago, but it is in the back of my head knowing he’s been slept by a guy. He’s been hurt,” Charlo said. “He knows how to take a loss. He knows that I hit hard. I’m somebody he can’t just play around with. I’m looking at this fight like, hey, if I touch him, if I catch him, I’m gonna hurt him. He’s been knocked out before and if I catch him I’m gonna hurt him.

“I’m going to do what I do and be destructive. My job is to take his titles and that’s what I’m planning to do.”

Rosario (20-1-1, 14 KOs), 25, who grew up in abject poverty in the Dominican Republic, has been a pro since 2013 but remains somewhat unknown despite upsetting Williams. He never had consistent or full training camps until recently, when he began working with trainer Luis “Chiro” Perez prior to the Williams fight.

“Training with Coach Perez has led to a lot of improvements and allowed me to reach my full potential,” Rosario said. “My camps for the Williams fight and the Charlo fight are the first real training camps of my career. After I fought Jorge Cota (in the bout before facing Williams), I knew that I needed to make changes and be more dedicated.”

Perez said Rosario has been the model student.

“Jeison had never done a real training camp in his life until recently. He trained any way he could figure out and he would take a lot of last minute fights,” Perez said. “That changed for the Williams fight and that’s changed for this fight. Everything he’s overcome, he’s done with desire.”

With his training situation in order and his confidence sky-high after beating Williams, Rosario views the fight with Charlo as his coming-out party.

“People are going to see on Saturday that it was no fluke that I beat Julian Williams the way that I did,” Rosario said through a translator. “This is going to be a war. I’m a warrior, and I’m going to find a way to win. That’s the only thing on my mind. I don’t feel any pressure. It’s an obligation, not only to my family, but to all of Latin America, to win these titles.

“There’s no room in my mind for the possibility of not winning. That’s going to be clear on Saturday night. I’m prepared for the fight to go the distance, but I also (can) finish it early.”